A Chinese student who exploited a glitch in KFC’s online ordering systems to get endless free chicken has been jailed.

He also shared the secret with four friends, who took a combined £15,500 of chicken before they were stopped. 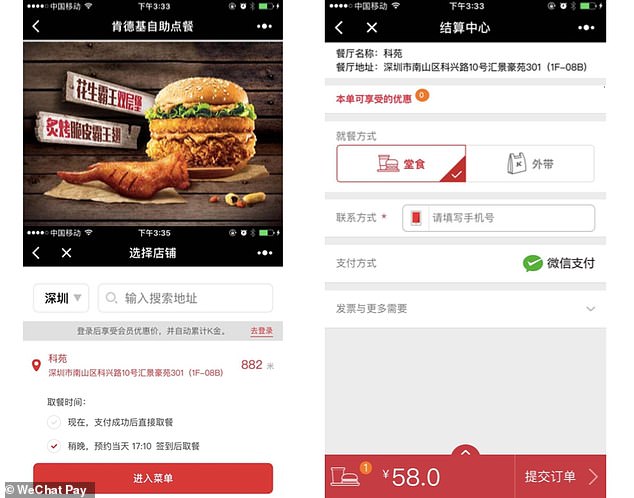 A 23-year-old student, named only as Xu, exploited a glitch between KFC’s WeChat pay site (pictured) and its mobile app to generate infinite free food vouchers

This week, Xu was jailed for two and a half years for fraud and fined £700 over the scheme, while his friends were jailed for between two years and 13 months.

Xu discovered the glitch while buying food using a voucher from KFC’s phone app in April 2018, according to Chinese state-run media.

He found that by switching between the KFC app and the company’s store on WeChat, China’s equivalent of WhatsApp, he could place an order using the voucher though it still remained in his wallet on the other account.

This effectively generated infinite free food vouchers, which he used to buy £6,500-worth of chicken between April and October that year.

Xu kept some of the food for himself, but also sold cut-price meals to his classmates.

He also shared the secret with four close friends, who exploited it in similar fashion and got away with free food worth between £1,000 and £5,200 each.

The gang were eventually caught and  Xu admitted to using the glitch to order free food, as well as passing the valuable information on to his friends.

He was brought before a court in Shanghai this week where he was handed a two and a half year sentence, reduced to two years because of his guilty plea.

Xu’s friends were given jail sentences ranging from two years to 13 months, and handed fines of between £400 and £100.