The City of Melbourne has been accused of operating a culture of fear and dysfunction, leading to a revolving door of staff.

A senior executive, sacked by City of Melbourne chief executive Justin Hanney in 2020, has accused him of overseeing a “toxic” culture of “fear”, while a councillor described his management style as dictatorial. 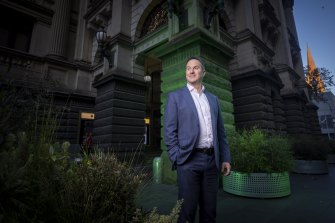 Chief executive of the City of Melbourne Justin Hanney was appointed to the role in 2019. Credit:Wayne Taylor

Staff are jumping ship in response, with almost one in four of the council’s top executives leaving in the past year.

Of the 42 roles listed on the council’s organisational chart as at May 2022, nine executives have departed since March 2021.

Staff members said the City of Melbourne’s annual Organisational Cultural Inventory, conducted by organisational change group Human Synergistics, found an increase in “competitive” and “resistant” behaviour at the council in the past year, a claim the council has denied.

The unrest comes as councillors consider whether to extend Hanney’s contract, a decision which must be made by the end of the month.

Hanney was appointed in 2019 and part of his remit was to improve governance and the culture of the council, after former lord mayor Robert Doyle was found to have sexually harassed multiple women while leading the City of Melbourne.

Hanney’s supporters describe him as a hands-on CEO and effective leader, but critics say there is a culture of fear at the council with a “power creep” to Hanney and Lord Mayor Sally Capp.

In an interview with The Age in the council’s meeting rooms, looking out across Swanston Street from above town hall, Hanney describes Capp as the “public spokesperson” for the council, while he says his role is “to be seen inside the organisation”.

“I’m an absolute believer in good governance,” he says. “I’m really clear in terms of what the Local Government Act allows me to do as a CEO and doesn’t, and the importance of ensuring that well beyond my time here at the City of Melbourne that good governance is about decisions that are made in the chamber, not ad hoc out of the chamber.”

One former City of Melbourne executive, who signed a non-disclosure agreement on her departure, says she was one of several employees fired by Hanney in 2020 as Melbourne went into lockdown.

“Justin Hanney has implemented a culture of fear and dysfunction,” she says. “Justin is constantly [making] captain’s calls. He doesn’t delegate, he doesn’t let anybody else make decisions, he is really super controlling.”

“A lot of employees have left the City of Melbourne because of some of [Hanney’s] captain’s calls and the way he is managing things,” another former employee says. “He is the cat who always has to get the rat.”

The former employee says all decisions have to go through Hanney which slows everything down.

One councillor, who wished to remain anonymous, says there was “lots of wrangling behind the scenes” about improvements to governance that needed to be made if Hanney’s contract was to be extended. 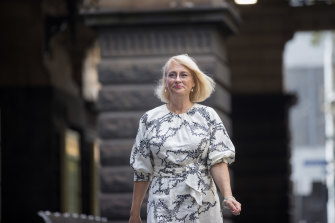 Melbourne Lord Mayor Sally Capp says decisions had to be made swiftly in lockdowns.Credit:Simon Schluter

“There is a real power struggle between the CEO and the office of the Lord Mayor,” the councillor says. “Everyone in the organisation knows the directors are hired and fired at the whim of the CEO, and it is quite a fearful job to hold.”

The councillor says the result of such high staff turnover was a “yes” culture where staff answered questions as they thought Hanney wanted them to be answered, rather than truthfully.

“He has a command, control and dictatorial style,” the councillor says.

The councillor says the role of council has become increasingly irrelevant in the aftermath of the coronavirus pandemic, when Hanney increased his power.

“We are still nowhere near to putting the genie back in the bottle and the structure that Justin put in place during Covid with extra layers of hierarchy and the deputy CEO, none of that has been undone,” the councillor says. “The way decisions are really made is that Justin makes them all and then if council should sign off on them, he just runs them by the Lord Mayor.”

The Australian Services Union is also alert to concerns about workplace culture at the City of Melbourne, with staff telling the union they are leaving the organisation because of the workplace culture.

A lot of employees have left the City of Melbourne because of some of [Hanney’s] captain’s calls and the way he is managing things.

“Workers have described to the union a decision-making process at City of Melbourne that is ‘unfair’ and ‘arrogant’.”

A spokesman for the City of Melbourne says the council had lower staff turnover than other organisations in the local government sector.

“In 2021, some senior staff changes were made to align with the new council strategy, and in response to a number of retirements or promotions,” the spokesman says. “A small number of staff were moved on for performance reasons, and we acknowledge that they may feel disappointed.”

A member of the council’s executive team, who also wanted to remain anonymous, says the council is highly functioning and operates smoothly.

“I would see a stock standard bureaucratic culture where it is a bit hard to get things done, but it is not toxic,” he says.

The high salaries of Hanney and other members of the council executive are also a bone of contention.

Staff complain Hanney has also brought in a swathe of “hand-picked” highly paid executives who were appointed to jobs rather than the jobs being advertised through a normal process.

“That’s a lot of money for a position that hasn’t really been justified to the council or publicly,” the anonymous councillor says.

Hanney says any concentration of power was the result of the coronavirus pandemic, which required swift action from him and Capp.

“We were pretty much both of us in here [at town hall] close enough to seven days a week through each of the lockdowns and there were daily decisions that had to be made,” he said. “The cycle of getting into a council room in a fortnight, where there was a business that would have been closed within that fortnight and there was a decision required to provide some support to the businesses, those decisions were made. They weren’t made in isolation.”

Capp says during the lockdowns there was a need for agility and to respond quickly to issues, and she is unaware of any concerns about management of the council.

“I do have a close working relationship with Justin as I expect all mayors do with their chief executive officers,” she says. “Both Justin and I are action oriented people, looking for outcomes, looking for results. I think that’s something we very much share in common.”

Capp says the high turnover at the City of Melbourne is mainly a result of the impact of the pandemic but says she is focused on increasing the stability of the council’s workforce.

“It’s been a full on two years for everybody but City of Melbourne was the most impacted municipality in Australia, you would expect there to be stresses and strains over and above the normal business as usual,” she says. “We’ve also been going through a big cultural review, which I think is really healthy and fantastic and making a huge investment in our people.”