COPS have come under fire after listing an advertisement for a "bizarre" £74,340-a-year role for an Assistant Director of 'Fairness and Belonging.'

West Midlands Police force is looking for a “forward thinking, creative individual” who will “support and oversee improved inclusive culture throughout the workplace.”

But politicians, cops and the public have hit out at the whopping wage packed and questioned why the force is hiring for the role at a time when funding is tough for policing. 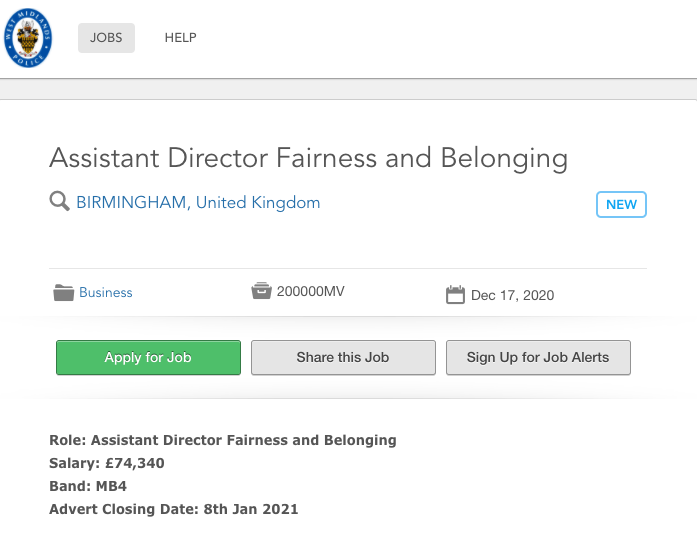 The Labour police commissioner claims West Midlands Police is thought to have lost over 2,000 police officers since 2010.

Danielle Boxall, of the TaxPayers' Alliance, told The Sun: “Taxpayers want their hard-earned cash spent on cops fighting crime, not cultural commissars preaching from behind their desks.

“Police chiefs now need to justify these costs or refocus their funding on the frontline.”

“Our current PCC thinks it’s acceptable to waste £74k a year on roles like this while he cries ‘government cuts’ as an excuse for unacceptable levels of crime in West Brom.”

She later told the Sun: "Last year in West Bromwich we saw some shocking crimes but instead of investing in more police, David Jamieson is wasting £74k on a role like this.

"The Labour Police and Crime Commissioner should be able to promote diversity in the police himself while he starts to prioritise reducing crime, or he should move over for someone that will.” 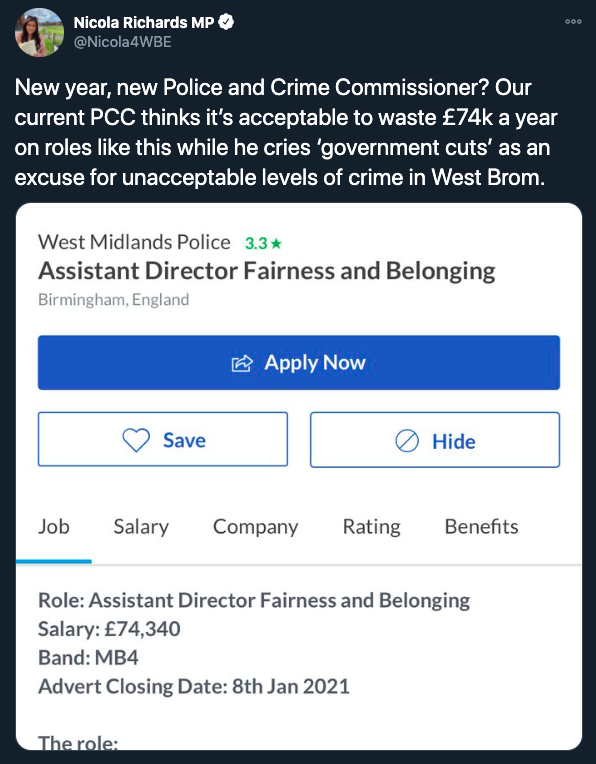 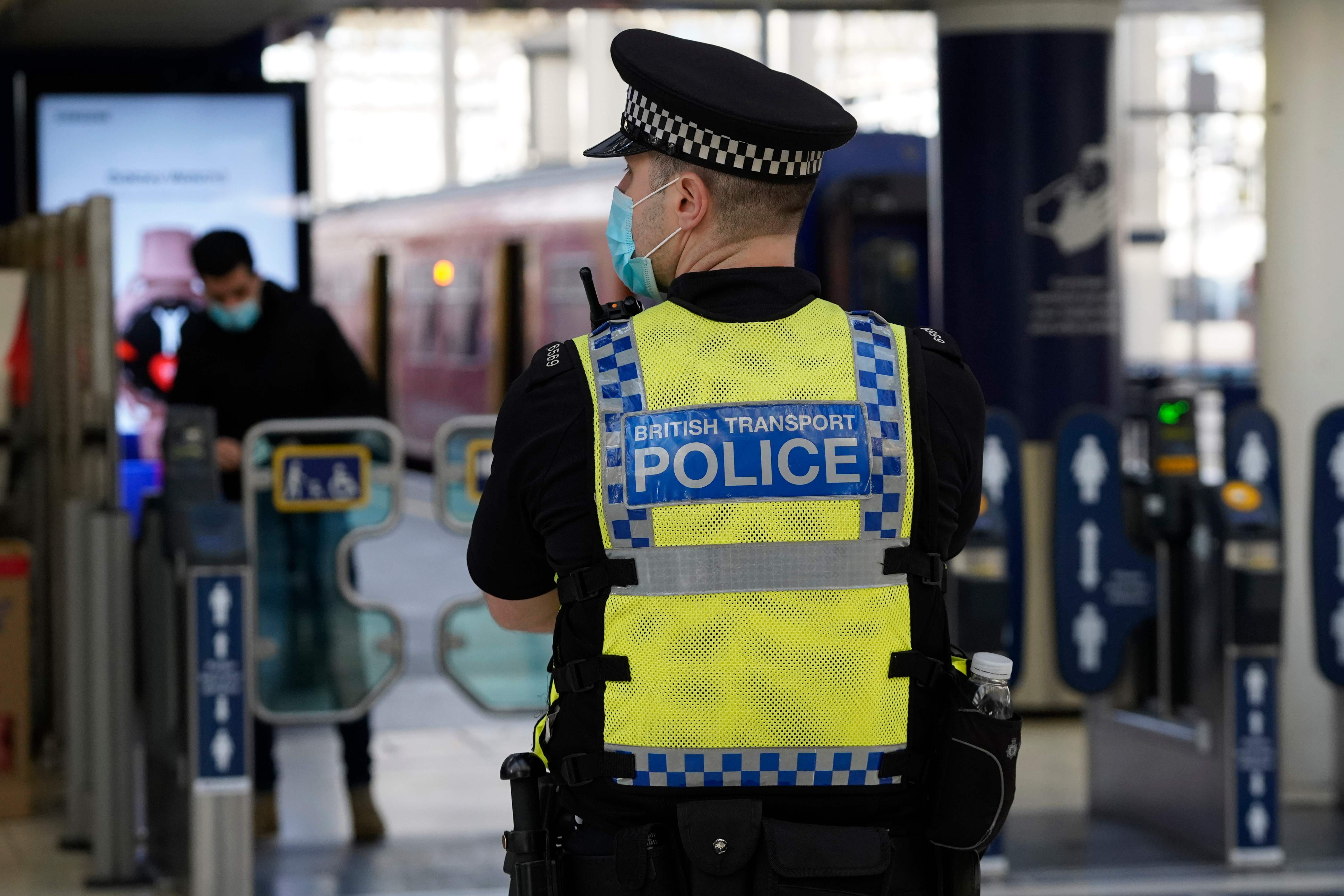 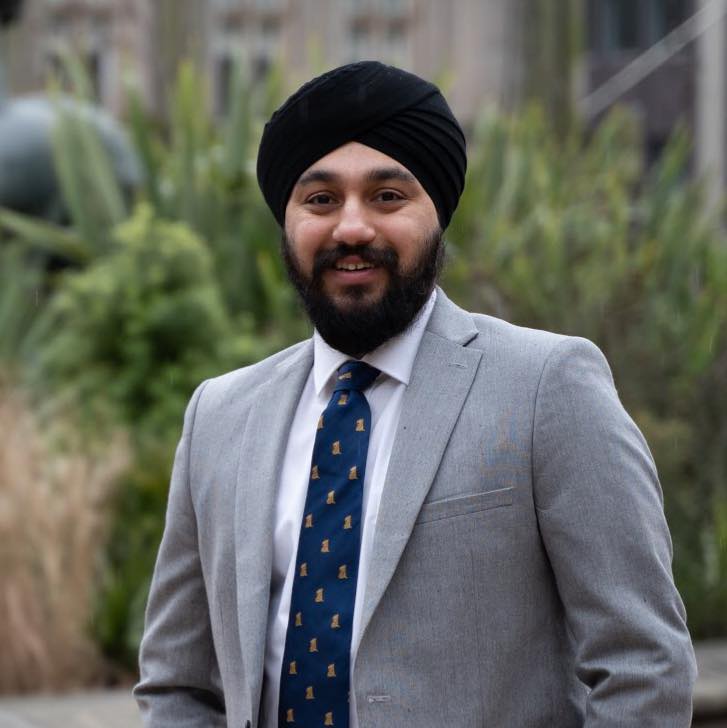 And Jay Singh-Sohal, the Tory candidate to become the next Police and Crime Commissioner branded the role "pointless".

He told the Express and Star: "Despite significant Government investment into his police budget, which now stands at £655m a year, the Labour Police and Crime Commissioner [David Jamieson] hides behind 'austerity', whilst wasting vast amounts of taxpayer's money on pointless roles such as this, in his bloated office that now costs residents more than £6m a year to run.

'That's taxpayer's money and resources that should be going into frontline policing to tackle rising crime across the West Midlands.

"As Police and Crime Commissioner, I will put an end to such waste and wokeness. We need less of this political correctness and more robust policing."

But hundreds on social media believe the salary is too high for the “nonsense role.”

One wrote: “The West Midlands Police *Assistant* Director for Fairness and Belonging is paid only fractionally less than a Member of Parliament. Great work if you can get it.”

Another added: “If the Assistant Director-of ‘Fairness and Belonging is on 74 grand, I hate to think what the Director is on.

“Either way this ludicrous post makes nonsense of the idea that West Midlands police are strapped for cash.”

While a third joked: “When will the public sector scrap these nonsense jobs? What’s next? Director of cuddles and hugs?”

“Must be a joke surely. How much does the Director of Fairness and Belonging get if the assistant gets that?

"Have they got a Director of Funny Walks? Takes me back to Monty Python.”

A spokesperson for the West Midlands Police said: “In the West Midlands we have the youngest and one of the most diverse populations in the country and policing this level of diversity brings complexity, challenges and opportunities.

“The successful candidate will ensure the force continues to provide a fair and responsive service to all our communities. This work is especially important in our recruitment process and in becoming a more representative force of the communities it serves.

“We also want to ensure the force continues to embed an inclusive culture within the workplace – one which enables all our staff to contribute and fulfil their potential, which in turn will improve our productivity and performance.

“We were recently voted the second most inclusive employer in the UK. This is recognition that West Midlands Police is an excellent place to work and that our ongoing work on inclusivity is proving successful.”

Applications for the job based in Birmingham close on January 8.