A Melbourne cosmetic surgeon will stand trial on allegations that he kicked and stomped on a man’s head in an unprovoked attack.

Dr Daniel Darbyshire, who worked for controversial celebrity cosmetic surgeon Daniel Lanzer, is accused of knocking over a 66-year-old man in Chapel Street, South Yarra, at about 10.30pm on December 17 last year. It is alleged he then kicked and stomped on the man while he was on the ground. 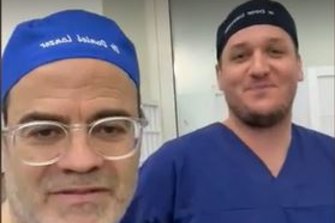 Police said at the time that the man suffered critical injuries.

Darbyshire, 30, appeared before Melbourne Magistrates’ Court on Tuesday and pleaded not guilty to intentionally causing serious injury in circumstances of gross violence.

Magistrate Olivia Trumble committed Darbyshire to stand trial in the County Court after the cosmetic surgeon chose to have his case fast-tracked to the higher court instead of facing a substantive pre-trial committal hearing.

The Australian Health Practitioner Regulation Agency has suspended Darbyshire over the charge.

Darbyshire briefly worked for Lanzer, who is facing a class action from hundreds of former clients over allegations of serious safety breaches and botched procedures that left patients in extreme pain and needing medical treatment. Lanzer retired as a medical practitioner in December.

There is no suggestion Lanzer was involved in Darbyshire’s alleged attack on the man.

On Tuesday, Darbyshire’s lawyer succeeded in having a $200,000 surety removed from his bail conditions after he was committed to stand trial.

Prosecutors wanted the surety to remain in place, arguing he posed a potential flight risk because he was a dual citizen of Australia and the UK and there was a chance his parents might relocate from Victoria to Western Australia.

However, defence counsel Adrian Lewin said his client had complied with his bail since he was released from custody in February and that he had surrendered his passports.

The magistrate said she struggled to see the need for the ongoing surety and removed it from Darbyshire’s conditions.

While he awaits trial, Darbyshire, who lives in Alphington, must report to police three times a week, abide by a daily curfew, must not drink alcohol and cannot leave Victoria.

He is due to face the County Court next month for a directions hearing.