Could the saviour of New Zealand lose their election? Jacinda Ardern will need help from coalition after she was on course to govern alone, polls show

New Zealand Prime Minister Jacinda Ardern will need help from coalition partners to form a government after the general election, according to the latest polls.

On Wednesday night, the 40-year-old Labour leader admitted she had used cannabis ‘a long time ago’ in a fiery debate with the National Party leader Judith ‘Crusher’ Collins, the fourth debate ahead of the October 17 vote.

Ardern jibed at Collins, 61, to ‘take a deep breath’ following a series of feisty interruptions, before the host said he’d like to ask the PM about cannabis.

‘That will be a deep breath won’t it,’ Collins said, prompting laughter from the socially-distanced audience.

New Zealand is holding a cannabis referendum in conjunction with the election, which Collins has rallied her party to vote ‘no’ in, while Ardern has not revealed how she will vote.

It comes as the closely watched 1News-Colmar Brunton poll revealed that Ardern’s party had dropped a crucial point to 47 percent, meaning that Labour would have 59 seats – two short of the 61 required for a majority. 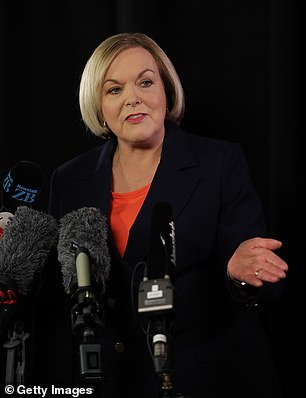 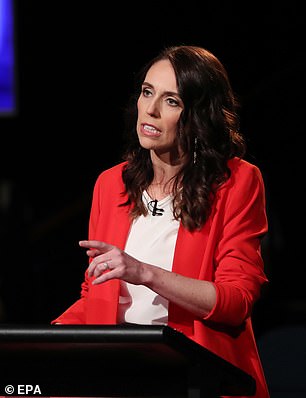 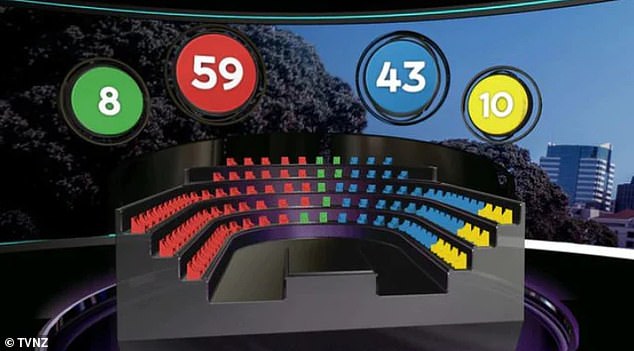 The closely watched 1News-Colmar Brunton poll revealed that Ardern’s party had dropped a crucial point to 47 percent, meaning that Labour would have 59 seats – two short of the 61 required for a majority.

Ardern’s liberal cause is likely to be shored up by the Green Party which is predicted to take eight seats.

Ardern was praised by some commentators for her efforts to hit back harder at Collins in Wednesday night’s Newshub Leaders Debate after she was labelled ‘a wet bus ticket,’ for how she had allowed the National Party leader to trample over her arguments the week before.

Following that debate Collins had labelled her opponent ‘a poor wee thing’ and claimed victory. She did not make the same claim on Wednesday night.

In the 1News-Colmar Brunton poll, taking into account questionnaires filled out up to the end of last week, Ardern’s popularity as preferred PM remained steady at 54 percent, while Collins rose to 23 percent, up five percentage points from the last poll.

Ardern, who was labelled the ‘saviour’ of New Zealand by a Maori leader earlier this year, has won support and global admiration for her response to last year’s attack by a white supremacist on two mosques, a fatal volcanic eruption and her success in tackling the coronavirus. 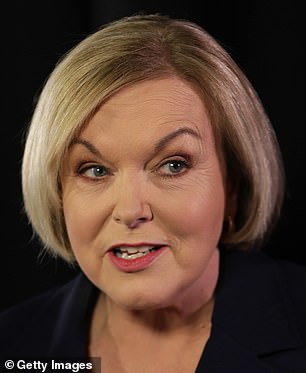 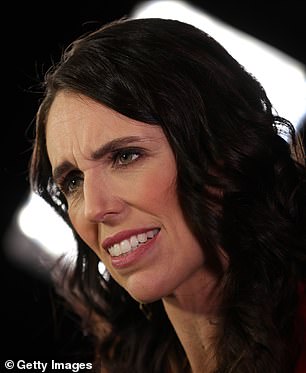 Ardern jibed at Collins, 61, to ‘take a deep breath’ following a series of feisty interruptions, before the host said he’d like to ask the PM about cannabis. ‘That will be a deep breath won’t it,’ Collins said, prompting laughter from the socially-distanced audience (pictured: Collins, left, and Ardern, right, during the clash) 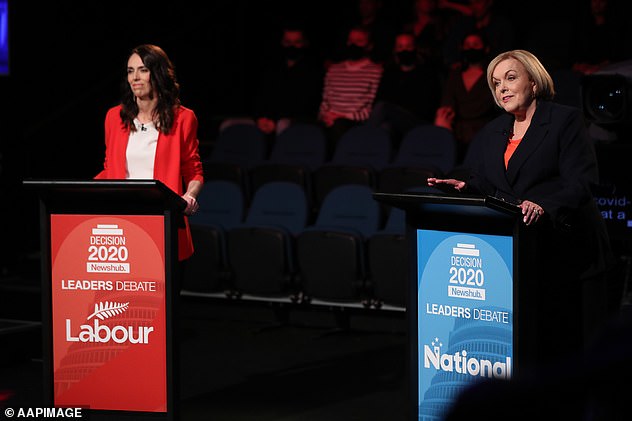 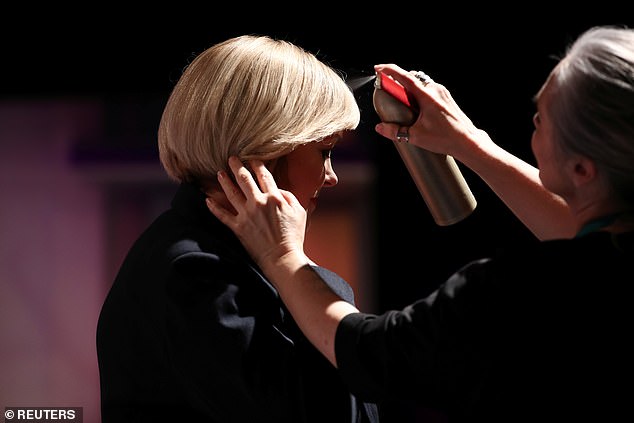 She was asked on Wednesday night whether US President Donald Trump was a dangerous influence on the world to which she replied diplomatically that she would work with whoever America elected.

Collins gave a warmer response, praising Trump for the peace deal brokered between Israel and some Gulf nations.

‘He has actually done some quite recent stuff with Israel and UAE and so actually that’s better than war, don’t you think? He hasn’t been ready to rush into war.’ Collins said.

Ardern hit back by saying, ‘It is a worry when the best thing you can say is we haven’t had war.’

It comes as Trump and former US vice president Joe Biden clashed across the Pacific for their first presidential election debate in Ohio.

Trump, like Ardern, has been nominated for the Nobel Peace Prize.

Last month Ardern lashed out at Trump’s comments that New Zealand was experiencing a surge in COVID-19 as ‘patently wrong’.

‘The idea that we would be compared to the outbreak in the U.S. by President Trump, I totally reject that and I stand by my response,’ said Ardern, whose brand of liberal, inclusive and compassionate leadership has led to some people labelling her ‘the anti-Trump’. 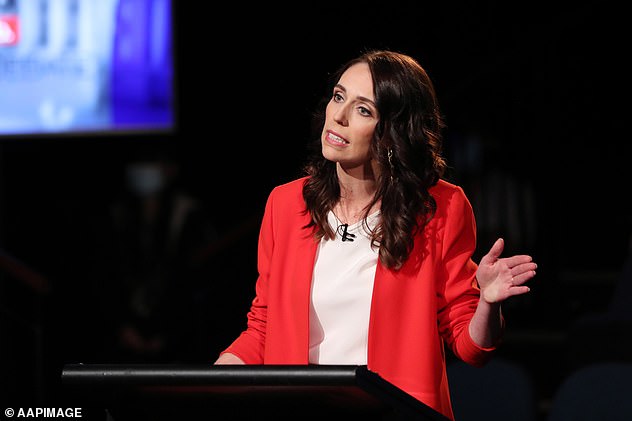 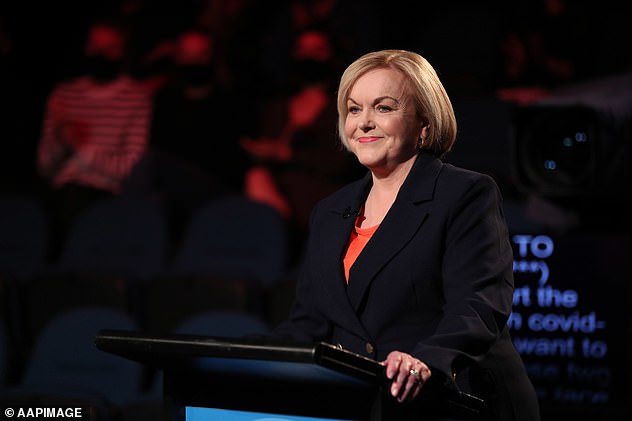 New Zealand has had 25 coronavirus related deaths, among the lowest in the world, while fatalities in the United States have crossed 200,000.

Tough restrictions to contain coronavirus limited New Zealand’s total cases to less than 1,500 and just 25 deaths, far fewer than other developed nations, and the virus is largely contained.

But Ardern won’t have it all her own way.

Collins is a seasoned politician well known to the electorate, who is mostly associated with issues such as law and order, and infrastructure. 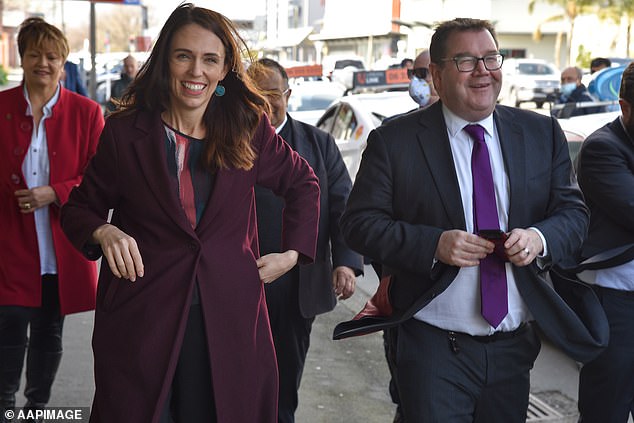 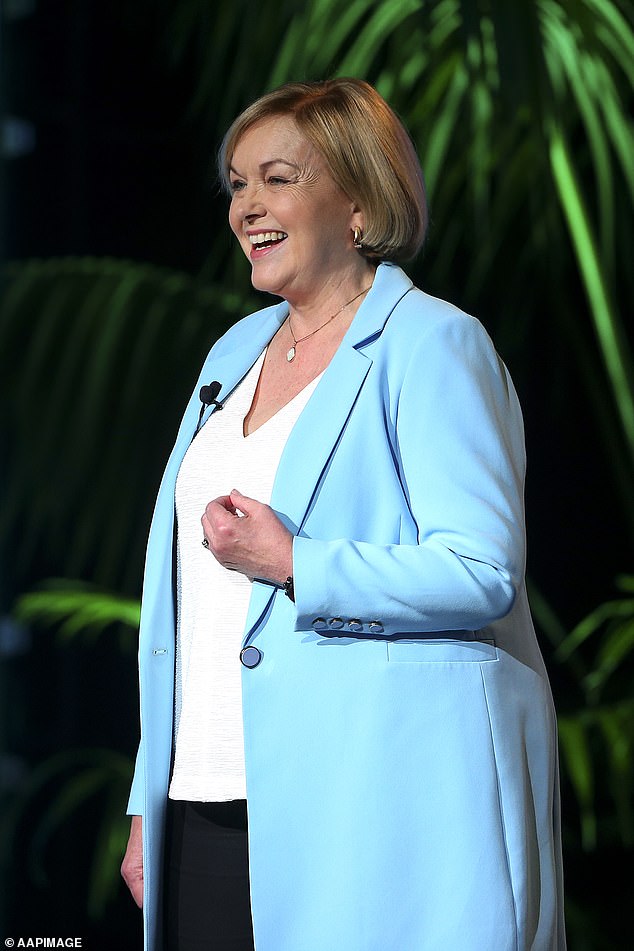 Meanwhile, support for the National Party, who are the main opposition under new leader Judith ‘Crusher’ Collins (pictured), rose two points to 33 per cent on Monday

She has made efforts to connect more strongly with the farming community, but her appeal remains local while Ardern is known for her statesmanlike representation of New Zealand on the global stage.

‘Ardern has turned that feeling right up to maximum volume, while Collins does not get any play in that space,’ said Richard Shaw, of Massey University.

Ardern will be hoping that she can get a boost from around 67,000 New Zealand expat voters registered overseas and the inclusion of the cannabis and euthanasia referendums as part of the poll could encourage more participation.

The majority of those enrolled are in Australia, at nearly 60 percent, followed by the UK at 17 percent and more than 6 percent in the US.

With the tightening in the latest polls, Ardern has urged New Zealanders across the world to vote.

‘Every single vote counts, including those Kiwis in Australia,’ she told Australian broadcaster Channel Nine. ‘They’re almost the equivalent to a seat.’