Couple are jailed for 13 years after smothering newborn son

A couple that smothered their nine-week-old son to death because his crying stopped them having sex have been jailed for a total of 13 years.

Luke Morgan, 26, was jailed for eight years while his partner Emma Cole, 22, was jailed for five years after they were found guilty of causing or allowing the death of newborn Tyler Morgan.

Neighbours said they heard rowing from their two-bedroom flat in Burntwood, Staffordshire, on April 29 2014.

They said Morgan was angry because the baby’s crying meant he couldn’t have sex with Cole.

Paramedics arrived at the family home at 2.42am to find the baby unconscious and rushed the baby to hospital, where he was pronounced dead just over an hour later.

His body had a bitemark on its forearm and also rib fractures. 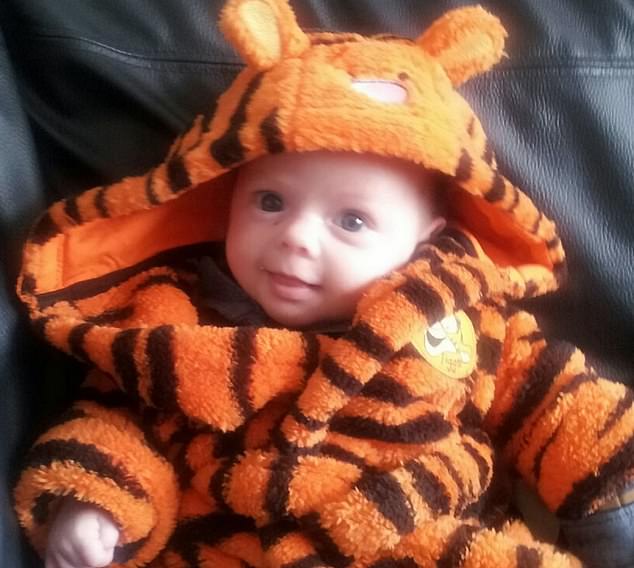 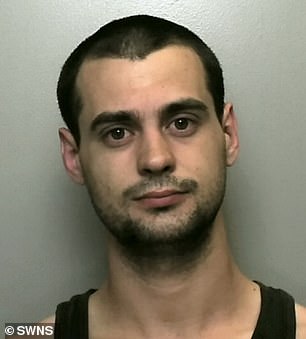 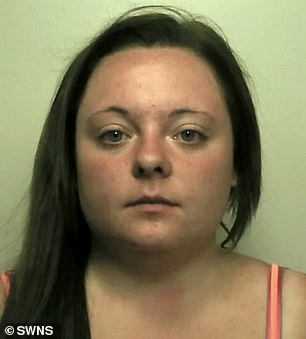 The baby’s father Luke Morgan, 26, was jailed for eight years while his partner Emma Cole, 22, was jailed for five years.  They were found guilty of causing or allowing the death of the newborn

‘I am satisfied there was a delay of up to one hour before calling an ambulance.”

The Judge also found Morgan responsible for a bite mark on Tyler’s forearm and rib fractures.

Prosecutor Andrew Smith QC said: ‘Luke Morgan was angry because he wanted to have sex with Miss Cole and had been prevented by Tyler being up.

‘On the night of April 28, a neighbour went to bed at 10.30pm and she could hear them having an argument about having no money. Emma was sobbing. 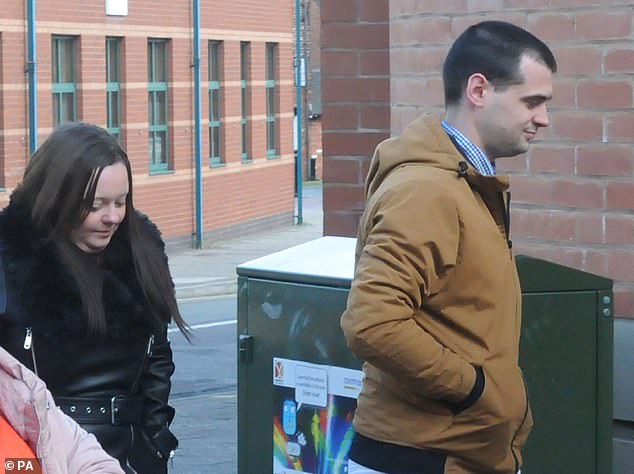 Luke Morgan, 26, and Emma Cole, 22, pictured entering court in April. Neighbours said they heard an argument at their two-bedroom flat in Burntwood, Staffordshire, before paramedics were called

‘In the early hours of April 29 there was a high pitch screech from Miss Cole.’

The court heard an ambulance was called to the couple’s home at 2.4am after Morgan said he had kissed his son’s forehead and it felt cool to the touch.

After the case, Tyler’s grandparents said in a statement: ‘Losing Tyler was the worst day of our lives.

‘Not knowing how or why is the worst situation we could have been in.

‘To think it’s been five years since we lost this beautiful baby boy and it’s only now, we are getting answers.

‘We miss you so much, Tyler and not a day goes by where we don’t think of you.

‘Our family has been ripped apart during the last five years. We now have to find a way of carrying on now that this trial has finished.’ 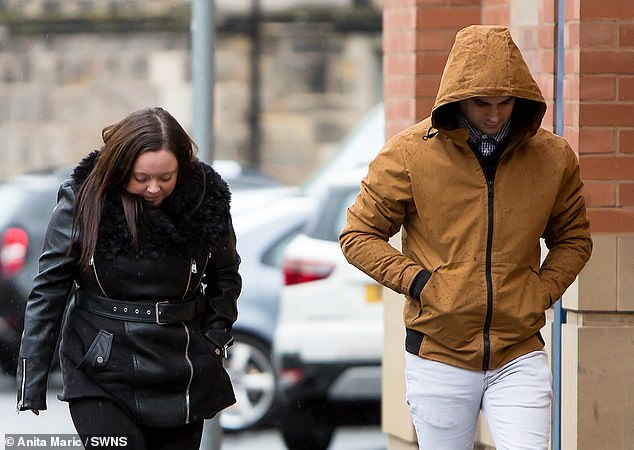 On Tuesday April 2 this year the couple went on trial accused of murder, manslaughter, allowing the death of a child and cruelty to a child under 16-years-old.

‘Nine-week-old Tyler had collapsed before the call had been made.

‘Tyler’s collapse had been caused by him being intentionally smothered or by his chest being depressed.

‘He was taken to hospital and died just after 4am. He had sustained other injuries including fractured ribs.

‘The prosecution contends this was caused it was deliberate, unlawful actions which caused the death and they are responsible for his murder.’

A jury of eight men and six women heard how Morgan would sometimes make his son play air drums and had struck him on the back at least one occasion.

‘They had been together for about two years and appeared to have a close relationship.

‘Tyler had an unremarkable history, he had suffered from a little colic but that was under control.

‘There was suggestions that the defendant’s attitude was not always shown to medical professionals. 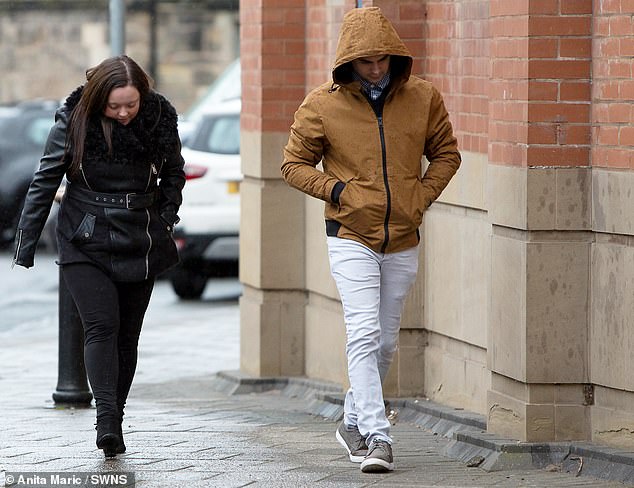 On Tuesday April 2 this year, the couple went on trial accused or murder, manslaughter, allowing the death of a child and cruelty to a child under 16-years-old

‘Emma Cole had said they had bathed Tyler cool water to keep him awake as warm water made him sleepy.

‘Their preferred pattern was for Tyler to fall asleep at times that were convenient to them.

‘Luke had put lemon juice on Tyler’s tongue, it may have been some chilli crisps though.

‘There was also an instance where Luke would play air drums with Tyler’s arms, something Luke knew that Tyler was to young to do and he appeared to have hit him on his back too hard on one occasion.

‘The relationship may have had some tensions that did not show to the outside. ‘

The court was told how on the night a neighbour had heard an argument between the defendants while Tyler was crying.

Mr Price said: ‘Luke Morgan was angry because he wanted to have sex with Miss Cole and had been prevented by Tyler being up.

‘On the night of April 28, a neighbour went to bed at 10.30pm and she could hear them having an argument about having no money Emma was sobbing.

‘In the early hours of April 29 there was a high pitch screech from Miss Cole. 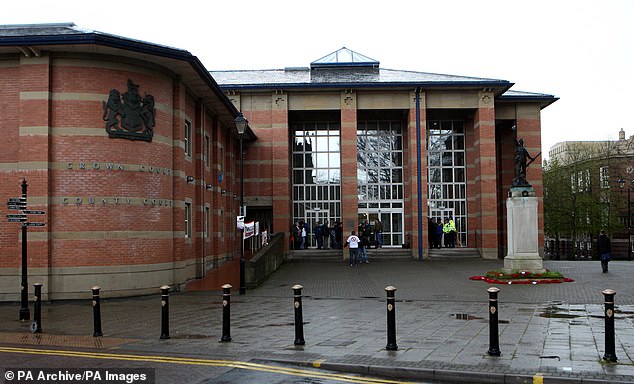 The couple were sentenced at Stafford Crown Court (Pictured). Judge Michael Chambers QC said one of the pair ‘deliberately smothered the child’

‘Barry and Helen Wood at the flat above heard arguing in the hours before Tyler collapsed, they thought it may have been taking place in the kitchen.

‘Mrs Wood said they were shouting at each other at 1am.

‘The prosecution say they were having the arguments at a time when they were drinking alcohol.

‘The 999 call was made at 2.42am and the first person to speak to the operator was Emma Cole.

‘She said Tyler was not breathing. Paramedics were immediately dispatched.

‘They were given instructions to perform CPR.

‘At 2.51am the first of the ambulance crew were met by Luke, he was crying and upset but showed the crew into the property.

‘Tyler was lying with his back on the floor. Emma Cole was trying to do chest compressions. She was plainly very upset.

‘When the paramedics were began to assess Tyler in the bedroom he was showing no signs of life and was in cardiac arrest.

‘He showed on response.

‘As paramedics treated Tyler the defendants argued. He was saying ”I was trying to wake you up”, she said ”I did not know I was asleep”.

‘The paramedics tried to find out how long he had been unresponsive. Mr Morgan provided no answers.

‘It was at 1.45am that Tyler had been unresponsive and Luke Morgan could not wake him.

‘Mr Morgan had repeatedly said ”this is a cot death isn’t it”. Miss Cole kept telling him to ”shut up”.

‘Tyler was taken to Walsall Manor Hospital and admitted to A&E at 3.40am. Tyler had no heart rate and was not making any breathing effort.

‘During April 29 police officers went to the address and saw two empty wine bottles and nine empty cans of lager.’