A hungry crocodile made sure a pair of anglers did not get too far with their catch.

In a video shared on social media over the weekend, a woman fishing in Cahills Crossing in the Kakadu National Park in Australia’s Northern Territory is seen dragging a sizable fish, reportedly a barramundi, along the shore after hooking it on her line, while her partner runs up with a net to grab the catch.

However, while the pair is attempting to grab the barramundi, their plans are interrupted by a saltwater crocodile that rushes out of the river and snatches the fish off the line.

In the scary video, the two are seen running away from the croc as it eats the fishy meal.

The Crossing is a popular fishing spot with locals and tourists – despite the dangerous crocodile-infested waters. 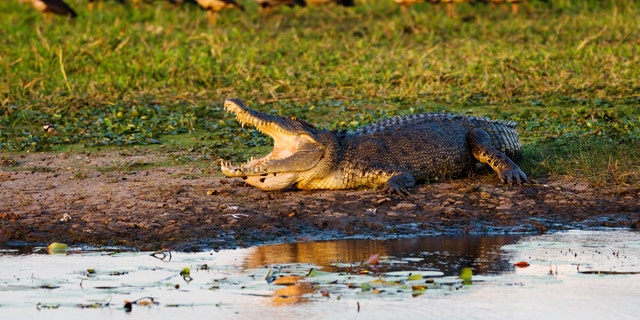 Crocodile expert Graham Webb told news.com.au in 2017 that for every crocodile you can see in the Crossing, there are “10 you can’t.”
(iStock)

According to News.com.au, Cahills Crossing is one of Australia’s most dangerous bodies of water. In 2016, a survey conducted by park rangers counted 120 crocodiles in a 3.7-mile stretch of water.

Crocodile expert Graham Webb told the news outlet that for every crocodile you can see in the Crossing, there are “10 you can’t.”

The park continues to warn visitors of the dangers of the water with signs throughout the area.