Barcelona: Antivirus creator John McAfee, 75, was found dead in his prison cell in Barcelona after the Spanish high court had authorised his extradition to the US, the Catalan justice department said, confirming an earlier report from El Mundo newspaper.

Everything points it could be a death by suicide, the department said in a statement. 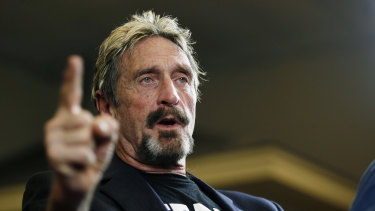 McAfee had been in jail in Spain since October 6 when he was accused of tax evasion and failure to disclose income charges at Barcelona airport. He had faced charges that he hid significant assets on his tax returns for a number of years, which included real estate and a yacht.

The 75-year-old’s defence had argued that the extradition request was politically motivated and therefore wasn’t appropriate.

He disagreed with the current monetary system, which has made him “public enemy No. 1,” according to court documents released on Wednesday. The US calculated that McAfee owed more than $US4.2 million in taxes for the 2014 to 2018, the documents show.