Incredible colour photographs from a new book have captured D-Day hour-by-hour ahead of the 75th anniversary next month.

Using pictures and testimony from the Imperial War Museum archives, D-Day and Normandy: A Visual History by Anthony Richards shows how Operation Overlord unfolded on June 6, 1944.

The shots, published chronologically for the first time ever, have brought to life one of the key turning points of the Second World War.

Fascinating snaps show Winston Churchill visiting the battlefield in Normandy, troops pouring on to the beaches after landing during the biggest military operation in history, and members of the Women’s Auxiliary Air Force (WAAF) packing parachutes for airborne troops.

Details about the day were cobbled together using official war photographers’ notes, often hastily scribbled in the midst of battle.

Mr Richards said: ‘There is surely no better way to understand an event of such scale as D-Day than to perceive it through the eyes and words of those who were actually there.

‘The museum is incredibly fortunate to hold an unmatched collection of written testimony and photography recording the event.

‘The Allies were acutely aware of the historical importance that would be attached to the landings and so made sure that the events were covered as far as was realistically possible in the circumstances by both film and still photography.’

D-Day and Normandy: A Visual History is available to purchase online at www.iwmshop.org.uk / at the online IWM shop from 16 May. 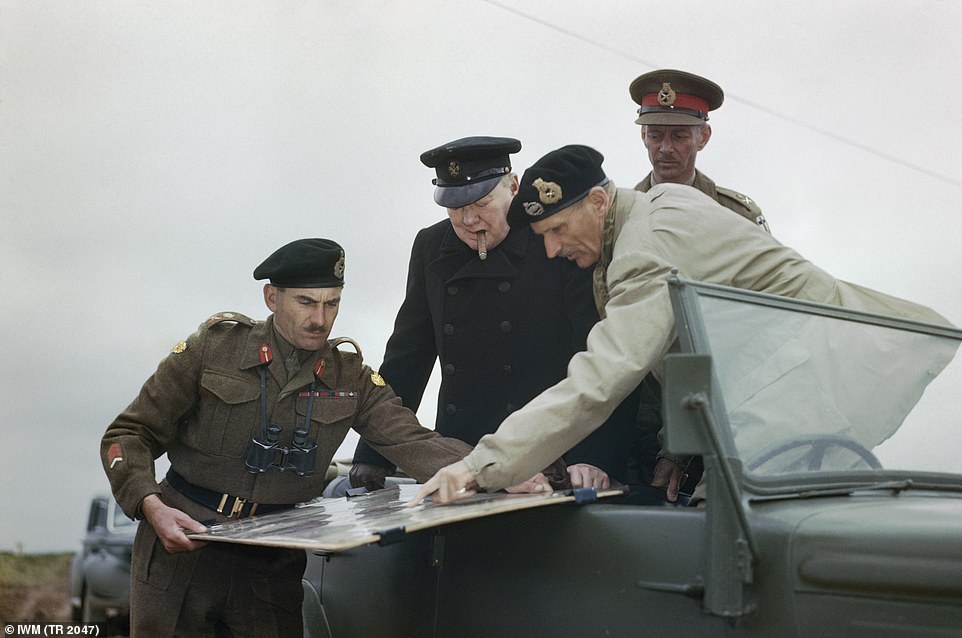 Photos taken in the lead-up to the D-Day landings have been published in chronological order for the first time, giving readers a glimpse into how Operation Overlord played out hour-by-hour 75 years ago. In this colour snap, General Montgomery is seen showing Winston Churchill the battle situation on a map held by the Commander of the 2nd Canadian Division, General G G Symonds, during the prime minister’s visit to Normandy on July 22, 1944 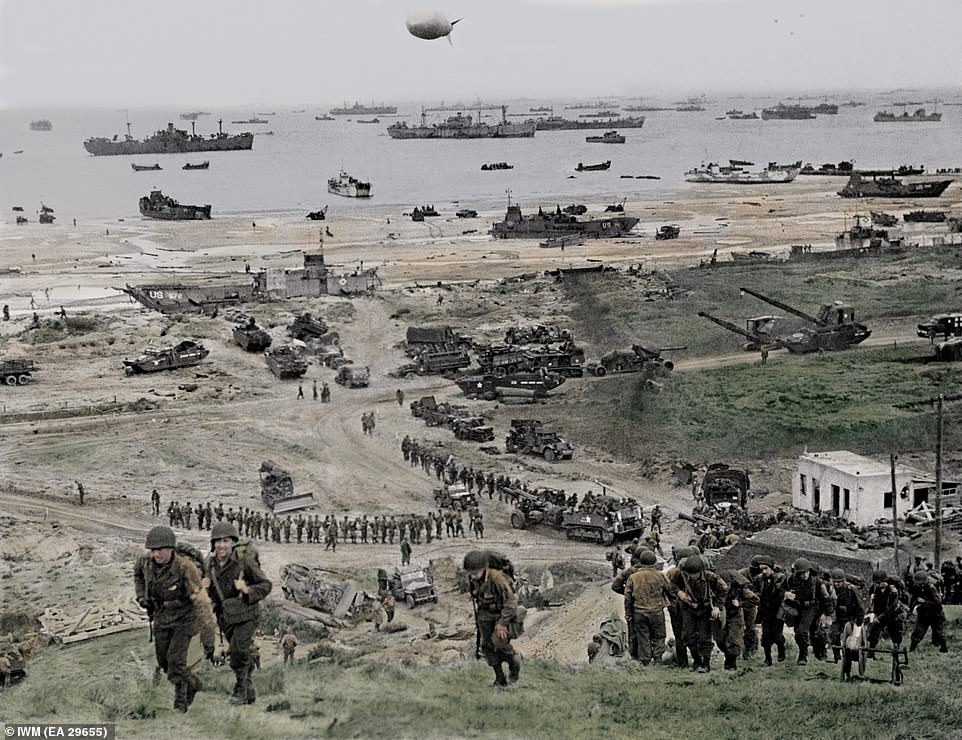 This colourised photograph, taken on Omaha Beach, shows reinforcements pouring ashore on D-Day during the biggest military operation in history which was one of the key turning points of the Second World War 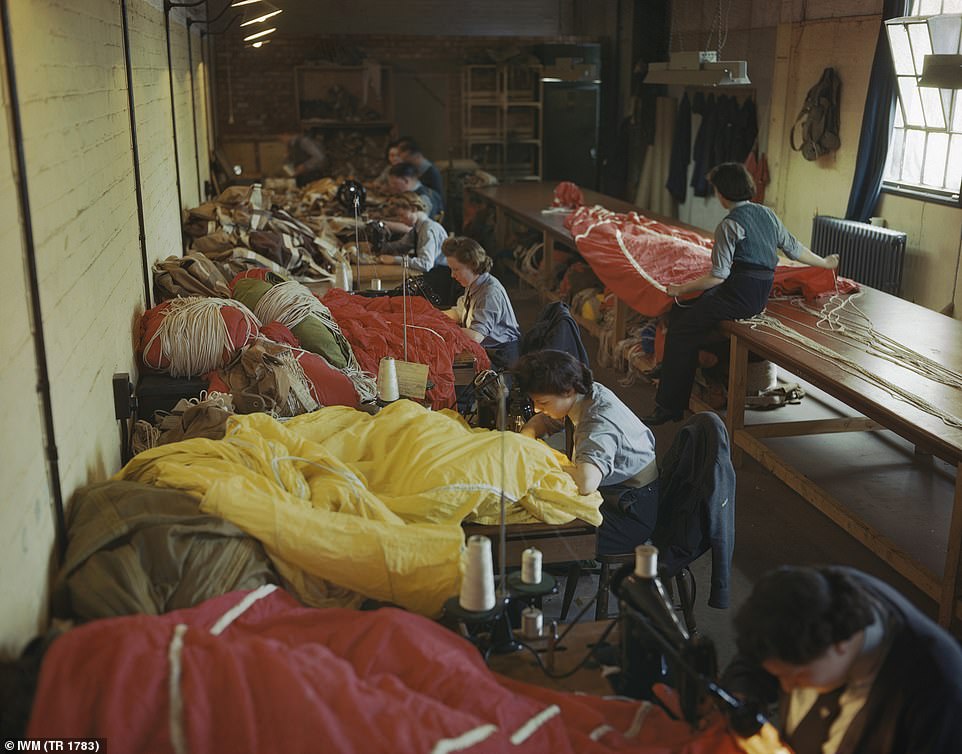 Months of meticulous planning went into the operation. Here, members of the Women’s Auxiliary Air Force (WAAF) repair and pack parachutes for use by airborne troops during the Normandy invasion. This shot was taken May 31, 1944 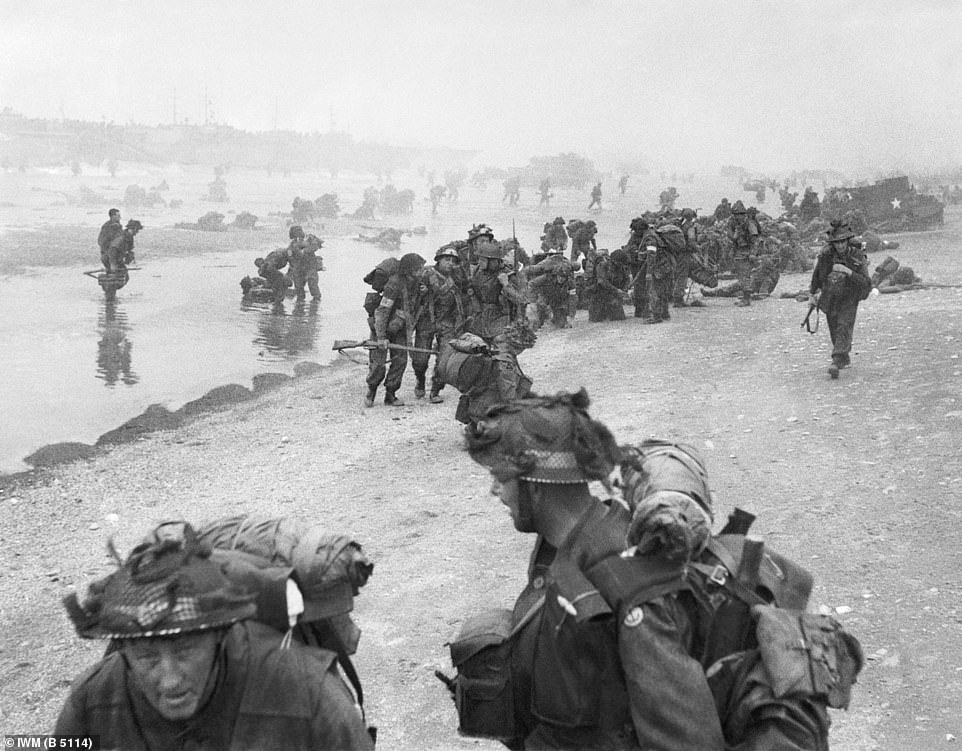 Many of the pictures were taken by official war photographers, and researchers were able to place them in chronological order thanks to their hastily written notes in the midst of battle. Here, troops from the 3rd Infantry Division congregate on ‘Queen Red’ beach, at around 8.45am. Closer to the camera are sappers of the 84 Field Company Royal Engineers, part of the No 5 Beach Group, who can be identified by the white bands around their helmets 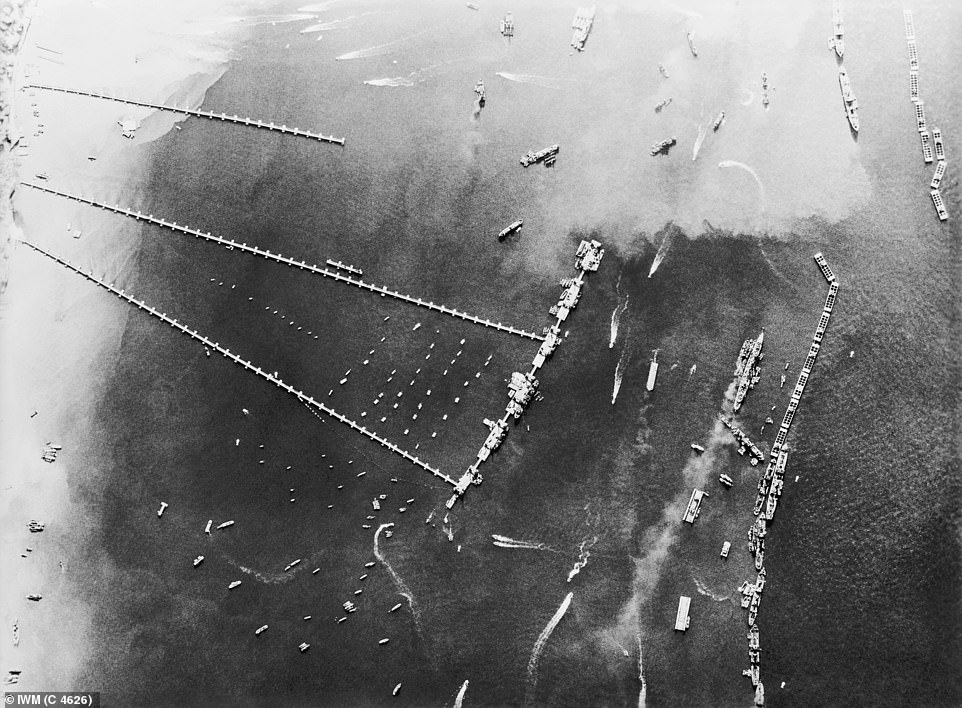 The pictures will feature in the new book D-Day and Normandy: A Visual History by Anthony Richards, which was released earlier this month ahead of the 75th anniversary. Pictured: An aerial view of the pierhead and breakwater at the artificial ‘Mulberry Harbour’ constructed off Arromanches 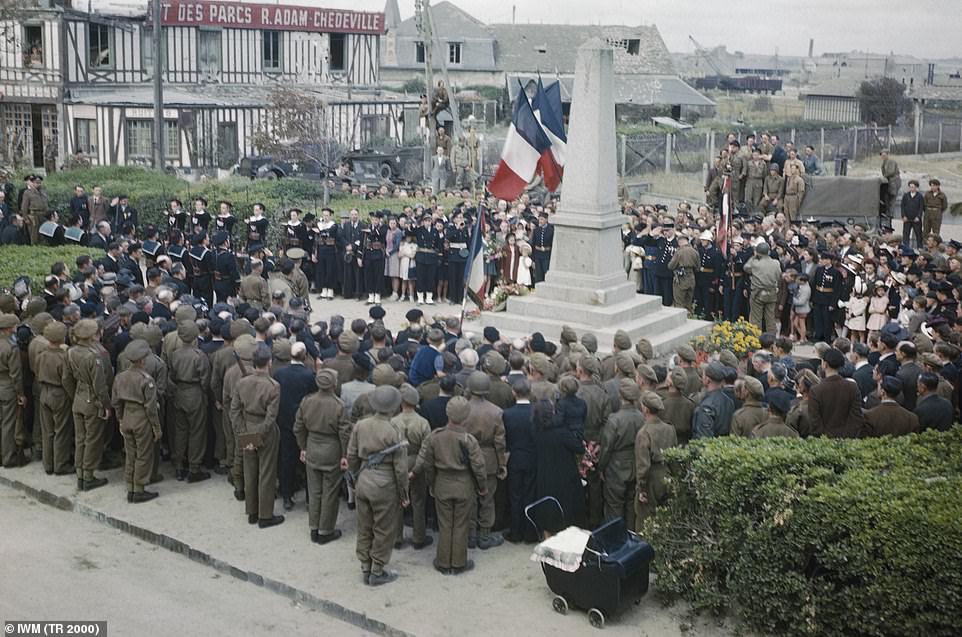 The book covers both planning stage through to August 1944 when the Allied Forces established themselves in Normandy and were ready to begin the advance towards Berlin. Pictured: Bastille Day commemorations held in Courseulles on July 14, 1944. Courseulles was one of the first towns to be liberated by the Allies 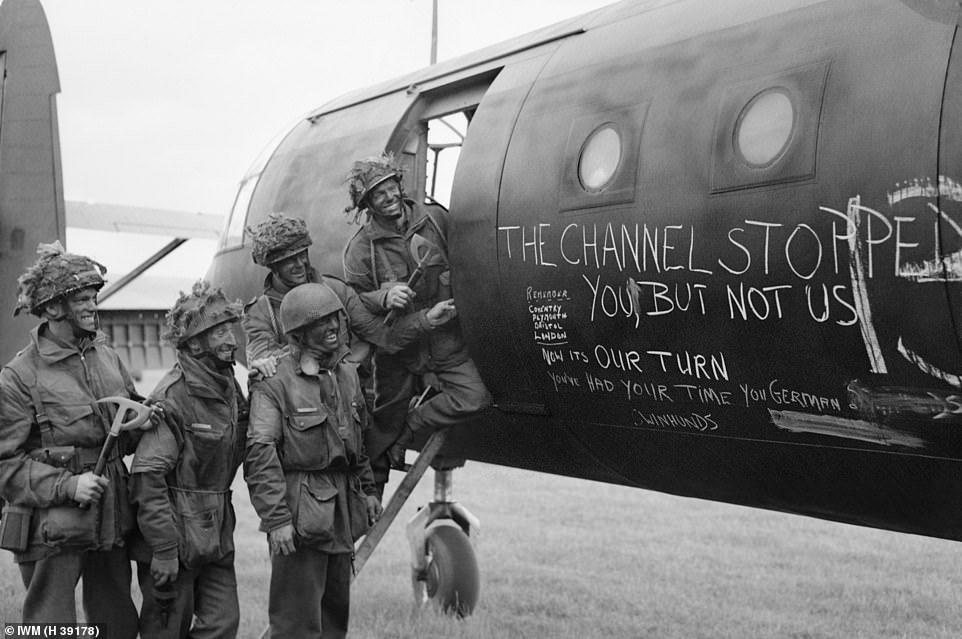 In this shot, a group of airborne troops admire the grafitti chalked on the side of their glider. It says ‘the Channel stopped you, but not us’ and ‘you’ve had your time you German swinhunds [sic]’. These men were preparing to fly out as part of the second drop on Normandy on the night of June 6, 1944 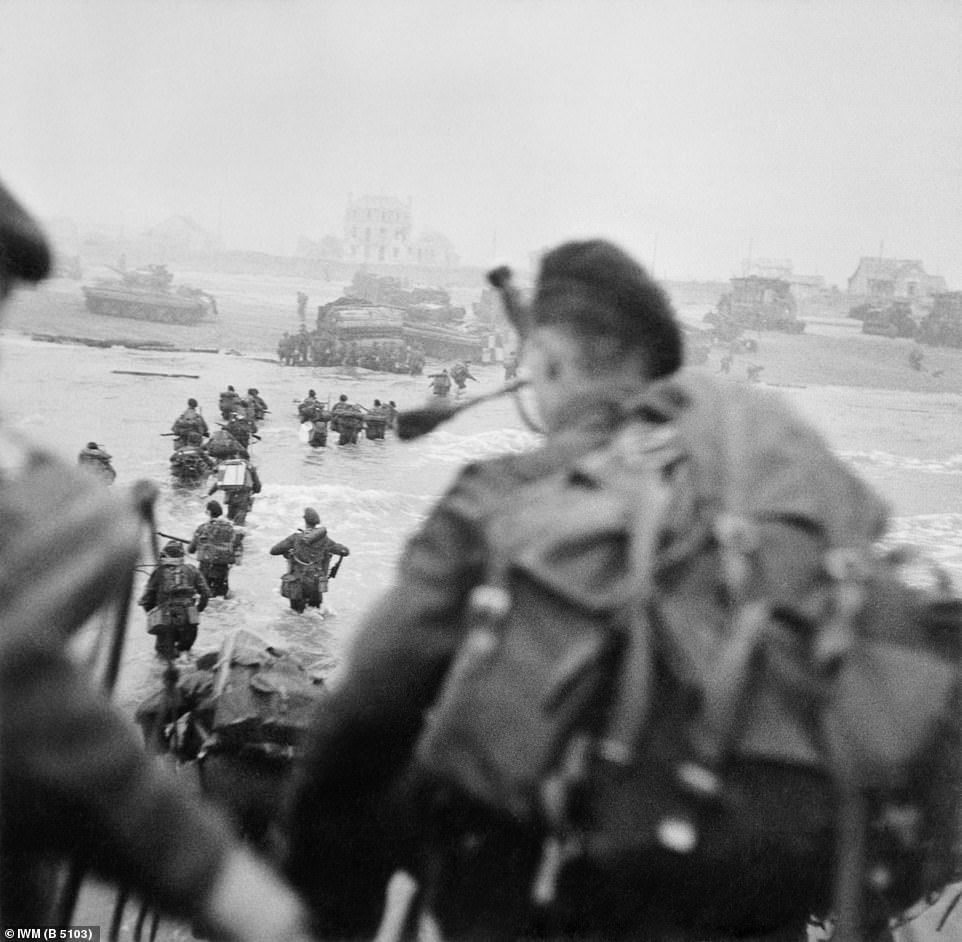 This captivating shot shows commandos of 1st Special Service Brigade, led by Brigadier Lord Lovat (pictured in the water, to the right of his men), landing on ‘Queen Red’ Beach at around 8.40am on June 6, 1944. Lovat’s piper, Bill Millin, can be seen in the foreground as he prepares to disembark