Can it really be just four days since Liz Truss was in Downing Street?

Only a week since Boris Johnson was packing his swimming trunks and returning from the Caribbean in apparent preparation for a Tory leadership bid?

A mere four days since Rishi Sunak ‘kissed hands’ with King Charles III to become the third Prime Minister in the space of seven weeks?

It’s as though a whole political epoch has been condensed into one manic spasm. Already Miss Truss feels like a sepia-tinted image and Mr Sunak an experienced hand.

This time last week the Conservative party resembled a ship adrift in the eye of a howling storm. The crew had mutinied, the rudder was gone and no one was on the bridge.

Today the battered old tub is on a distinctly more even keel. Not exactly surging through the waves, but saved from Davy Jones’s locker – for now at least. 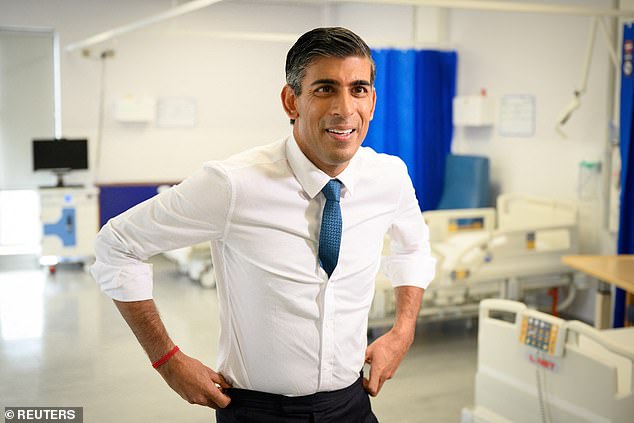 The election (some would say coronation) of Mr Sunak has restored a sense of calm in these fractious, unquiet times.

And it’s not just the party that’s breathing a collective sigh of relief but the whole country. The markets have stabilised. The polls are beginning to turn.

While there is certainly no cause for complacency, Mr Sunak’s arrival has steadied the ship. The question now is: Where does it go from here?

In a confident start, Mr Sunak identified the manifold problems facing the country.

An economy still reeling from Covid. Borrowing running out of control. A public sector in desperate need of reform. NHS waiting lists at record levels.

He has warned of ‘difficult decisions to come’ as he walks a tightrope between fiscal responsibility and the incessant clamour for more public spending.

We will see next week whether he strikes the right balance.

Beyond the economy, we have cross-Channel migration at record levels, Northern Ireland in turmoil over the Protocol, a ‘woke’ assault on our institutions and universities, and a terrifying spike in violent crime.

Mr Sunak will have a brief honeymoon period. One poll yesterday showed he is already more trusted than Labour’s Sir Keir Starmer on the economy and neck-and-neck on who would make the better PM.

And that’s before he’s even done anything, which shows how little faith the public has in the man Boris dubbed Captain Crasheroonie Snoozefest.

Mr Sunak is right to turn the focus on to Labour and its lack of ideas and obsession with class war politics.

Sir Keir was one of Jeremy Corbyn’s key lieutenants and shares his failed socialist instincts and prejudices. It’s about time we heard what his answer would be to inflation and the cost of living crunch, beyond the fantasy that both can be solved by yet more taxes.

However, the Tories will not win the next election by default. They must convince the public they can do better than Labour – not that they couldn’t possibly do worse.

Slick promotional videos, of the type put out by Mr Sunak yesterday (unwisely, we would humbly argue), will not do the job. The country demands substance.

The PM must listen not to spin doctors and brand managers but to ordinary people like those he met at Croydon University Hospital yesterday, worried that the NHS is on the verge of collapse and demanding action.

He comes into this job on a wave of good will. The obstacles ahead are daunting, but not insurmountable. With a listening ear and a steady hand on the tiller, he can yet steer the ship of state through the squalls and reefs that lie ahead.