‘If we waited for the police my dad would still have no car’: Daughter, 32, turns detective and finds her father’s stolen £12,000 Jaguar XF after becoming frustrated with officers’ ‘slack’ response

A woman who was let down by police ‘incompetence’ was forced to find her 73-year-old father’s stolen car herself after officers failed to do so.

Harry Harrington had his £12,000 Jaguar stolen from his driveway in Bournemouth overnight.

His daughter Becky Harrington, 32, claimed the police were ‘pretty slack’ when the theft was first reported so she decided to take matters into her own hands and flood social media with appeals to find it. 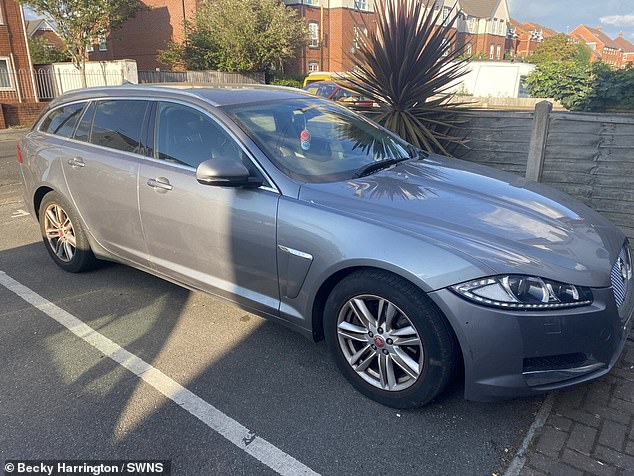 The Jaguar XF estate was stolen in the middle of the night on July 23 from Harry Harrington’s driveway in Bournemouth. After what his daughter, Becky Harrington, said was a ‘pretty slack’ response from the police, she flooded social media with appeals to find the missing vehicle.

It comes amid a watchdog report that found that most victims of burglary, robbery and theft in England and Wales are being let down by not being given the justice they deserve.

Miss Harrington, unsatisfied with the police response, asked people in an online car sales page if anyone had seen the Jaguar XF estate.

The post ended up getting shared over 200 times on one for-sale page and then posted in a further 50 online groups. 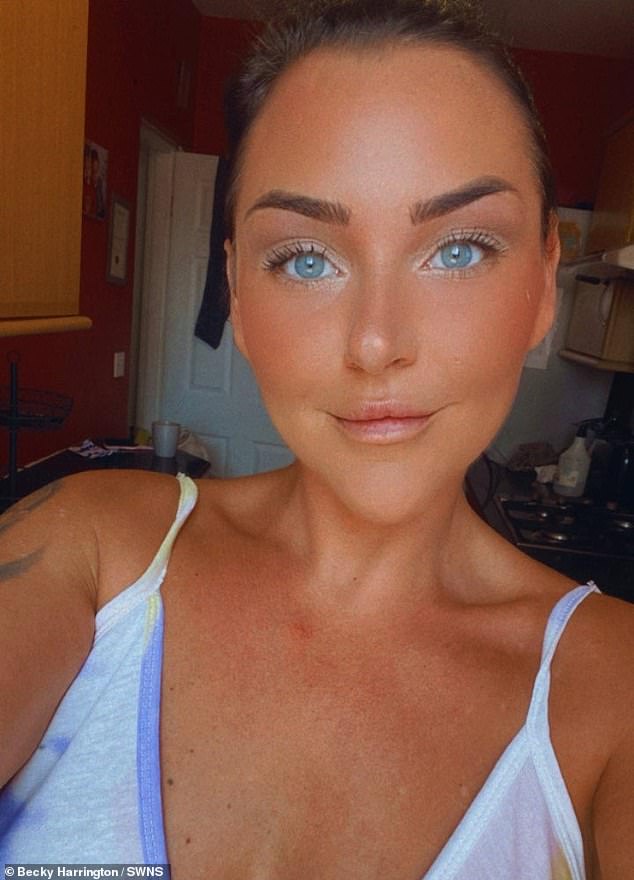 Miss Harrington’s appeal was shared hundreds of times on social media. Eventually she found some CCTV footage which showed the car abandoned with its doors left wide open. She claims when she asked Dorset Police if they would look at CCTV footage they said if they had ‘the manpower’ to do so. The footage is now being used to find the person who stole the car.

‘I started a social media campaign, I added myself in every group I could find, I went into local petrol stations, I went into shops, I was going round with a photo of the car,’ she told the Sun.

She added: ‘I put it all over Facebook and I mean the post was being shared over 200 times in one For Sale page.

The ‘detective’ spent days visiting local shops and petrol stations to see if the car had been spotted on their CCTV cameras.

Eventually she found some CCTV footage which showed the car abandoned with one its doors left wide open.

In the footwell of the passenger seat, Miss Harrington found empty drinks bottles, dirty face masks, a parking charge letter as well as what looked like a used nappy.

The father and daughter were later shocked after Mr Harrington was slapped with a £60 fine speeding ticket, that the burglars had got while joyriding around the seaside town at 3.30am on the night it disappeared. 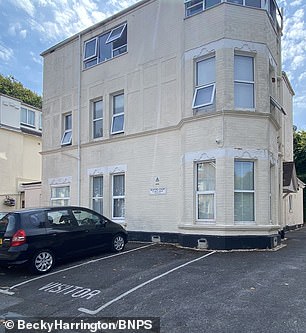 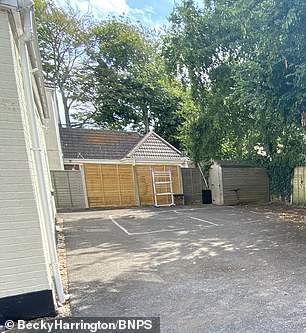 The silver Jag was found abandoned in the car park behind these flats in the seaside town. Miss Harrington eventually found the car after trawling through CCTV from dozens of petrol stations and local shops around Bournemouth. After finding the vehicle she said she was ‘buzzing’ and ‘ecstatic’ for her father.

The mother-of-two said: ‘I just wanted to do something about it. Luckily we did.

‘With all due respect if we were waiting for the police my dad would still be sat at home with no car.’

Mr Harrington had only bought the brand new car in 2020 and so his daughter was ‘buzzing’ when she found it.

The 32-year-old, who has now been lauded as a detective on social media, had asked whether the police were going to check CCTV footage after the vehicle was stolen on July 23.

She claims the police said they would only be able to check the cameras if they had ‘the manpower’ to do so.

After finding the car she said: ‘I was ecstatic for my dad.

‘He is 73-years-old, he is not the biggest of blokes – I am not going to watch my dad struggling.’ 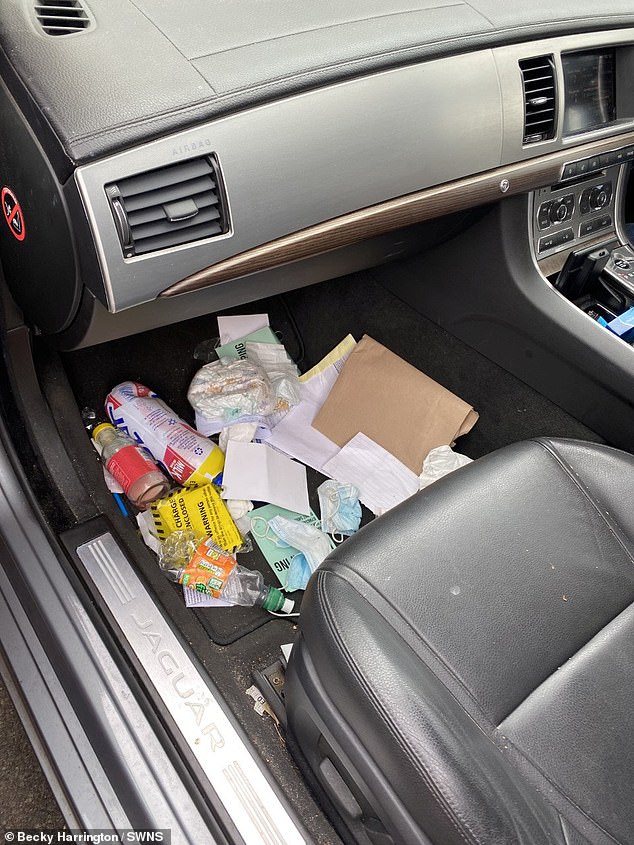 The mess left in the footwell of the front passenger seat. Empty drinks bottles, used facemasks, letters, a parking charge and what looks like a nappy were found in the abandoned vehicle.

Once the car was checked and made sure it was safe to drive, the woman told her dad to ‘get in the motor and get it back’.

After her heroic efforts and the ‘shocking’ response from Dorset Police Miss Harrington has decided to study criminology and law at the Open University.

She said: ‘We didn’t hear from them really, pretty slack.

‘I contacted them to let them know the car had been found and asked when they were going to check the CCTV and they replied with ‘if we have the manpower’.

‘It took them over a week and a half for them to check the CCTV of where the car was found.’

The CCTV footage is now being checked and sent to other forces to see if the driver can be located on their databases.

A recent report, released by Her Majesty’s Inspectorate of Constabulary and Fire & Rescue Services (HMICFRS) said that the police are not doing all they can to help victims when they report crimes.

The report highlighted that in 71 per cent of burglary reports examined, the police personnel did not give victims any advice on crime-scene preservation during the initial call.

It also highlighted those investigations are not being appropriately or thoroughly supervised, with a third of cases examined having insufficient evidence of proper supervision.

Reacting to the figures, Miss Harrington said: ‘It doesn’t shock me, with the communication and incompetence we have experienced with the police, no wonder the statistics are like that – people need to get their heads out of the sand.

‘At the end of the day my dad is only driving in his car down to our manpower.’ 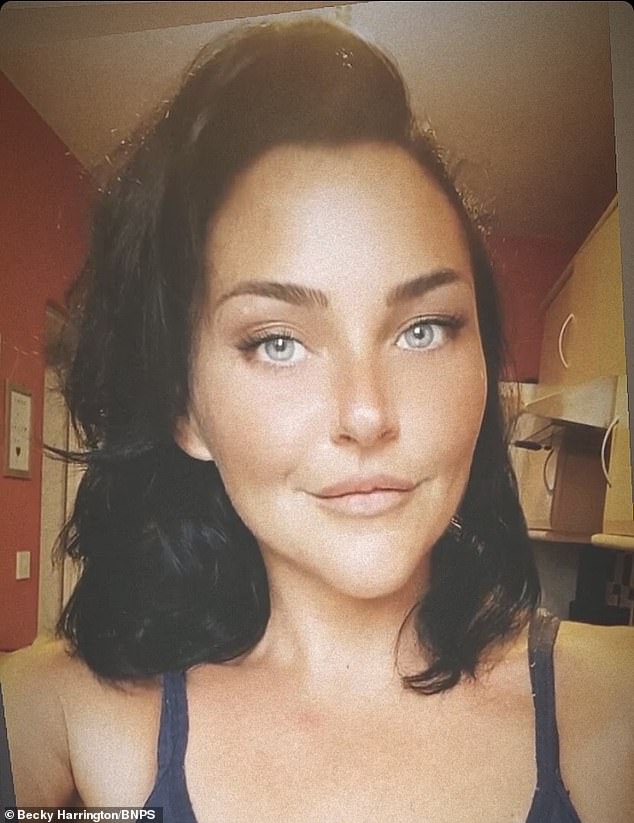 The mum-of-two is now set to study criminology and law at the Open University after being lauded a ‘detective’ online.

A spokesperson for Dorset Police said: ‘Dorset Police received a report relating to the theft of a motor vehicle from outside an address in Bournemouth between 11pm on Saturday 23 July and 6am on Sunday 24 July 2022.

‘Local officers made a number of attempts to visit the victim and consequently made contact with the victim’s daughter, who then updated the police that the vehicle had been recovered.

‘As part of the ongoing investigation, officers carried out house-to-house enquiries in the vicinity of where the vehicle was located and have successfully obtained significant evidence.

‘Enquiries to identify the offenders are continuing and we are currently exploring further lines of enquiry available to us.’