National Guard members in Washington, D.C., will wear black vests – in place of their usual camouflage ones – on Wednesday as crowds have already begun to gather to show their support for President Trump before the newly sworn-in Congress is expected to officially certify Electoral College votes in the final step before President-elect Joe Biden is sworn in on Jan. 20.

The black identification vests are meant to highlight a different mission for D.C. National Guard, spokesman Capt. Tinashe T. Machona told Fox News. It is the traditional uniform worn during domestic support operations, including presidential inaugurations, the 4th of July celebration, response to the COVID-19 pandemic, and the 57th anniversary of the March on Washington last year. It is not body armor or a tactical vest.

"It’s different from the camouflage vest, just like this mission is different from other missions we’ve done in the past," Machona said, explaining that each black identification vest includes the guardsman’s name, rank and service "plus the D.C. flag to show our pride in our city." 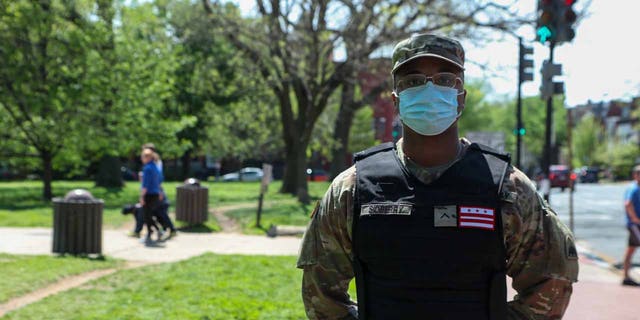 As thousands are expected to show up to support Trump on Wednesday, D.C., Councilmember Charles Allen has urged people not to counterprotest in the nation’s capital to avoid a repeat of the clashes between opposing groups seen after nightfall on Dec. 12.

Trump is planning to address supporters at 11 a.m. at a rally on the Ellipse just south of the White House.

Referencing protests planned this week by those he categorized as "White nationalist and militia groups," Allen said "these are people who have already lost, desperately clinging to conspiracy theories, who will not be reasoned with. They are eager to do harm to others."

"They will not overturn the results of our national election. They will not stop a peaceful transfer of power. They only seek conflict to elevate themselves. Do not give them what they seek," Allen said in a statement. "Going downtown to counterprotest, during a pandemic, will do nothing to advance our values, and only complicate the District's planned response to protect D.C. residents and institutions." 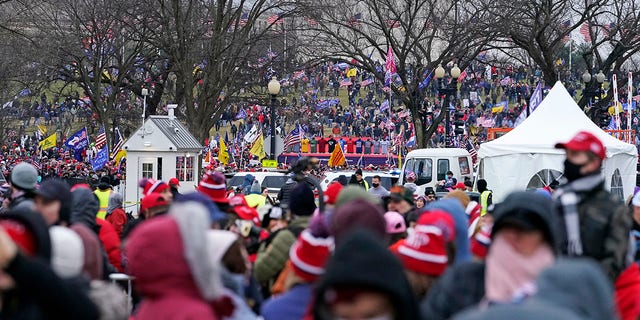 On Tuesday night, at least six people were arrested for a variety of offenses, including weapons and ammunition possession, assaulting a police officer, simple assault and possessing a stun gun. Hundreds of Trump supporters had gathered in Freedom Plaza to decry the vote in the Electoral College and remained after nightfall, even as temperatures dropped to the low 40s and a steady rain fell.

Video circulated online showed a group of people, many of whom carried pro-Trump flags and did not wear masks, curse Antifa as they marched through the streets Tuesday night. The crowd clashed with law enforcement officers blocking access to the Black Lives Matter plaza.

Trump and his campaign team have disputed the election results and have brought their claims to courts throughout the country, and nearly all of those legal challenges have failed. A group of GOP senators led by Sen. Ted Cruz, R-Texas, have said they will object to Wednesday’s certification of the election results unless there is an emergency 10-day audit of the results by an electoral commission.

In a series of tweets Tuesday, the president – arguing that Antifa should be declared a terrorist organization – warned the far-left group to stay out of Washington, adding that law enforcement is watching "very closely."

The president told Democrats, as well as "the weak and ineffective RINO section of the Republican Party," to pay notice to the thousands of people "pouring" into D.C. who he says "won’t stand for a landslide election victory to be stolen."

"Washington is being inundated with people who don’t want to see an election victory stolen by emboldened Radical Left Democrats," Trump tweeted. "Our Country has had enough, they won’t take it anymore! We hear you (and love you) from the Oval Office. MAKE AMERICA GREAT AGAIN!"

The group Women for America First estimated that 30,000 people will attend a so-called "Save America Rally" at the Ellipse on Wednesday, according to a permit filed with the National Park Service. Several other pro-Trump rallies are planned Wednesday at separate locations across the nation's capital.

According to a press release from D.C. National Guard, more than 300 guardsmen are supporting the District of Columbia from Jan. 5 to 7, 2021, at the request of Mayor Muriel Bowser and Dr. Christopher Rodriguez, director of the D.C. Homeland Security and Emergency Management Agency, on behalf of the D.C. Metropolitan Police Department and D.C. Fire and Emergency Services.

Allen pointed out that D.C. has not issued permits for pro-Trump events scheduled this week, and these gathering were planned to take place on federal property. Over the weekend, Bowser, a staunch critic of Trump, advised residents not to engage with demonstrators "who come to our city seeking confrontation, and we will do what we must to ensure all who attend remain peaceful." 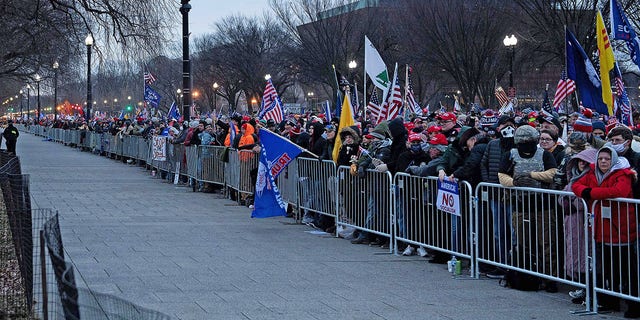 People wait for a rally of supporters of President Donald Trump challenging the results of the 2020 U.S. Presidential election on the Ellipse outside of the White House on January 6, 2021 in Washington, DC. (Photo by Brendan Smialowski/AFP via Getty Images)
(AP)

She reminded the public and anyone attending the rally that firearms are prohibited "within 1,000 feet of any First Amendment activity," and police posted signs notifying the public that all firearms will be prohibited – even for city residents who have a concealed carry permit.

A pro-Trump rally on Dec. 12 ended in violence as hundreds of Trump supporters, wearing the signature black and yellow of the Proud Boys, a pro-Trump group, clashed with Antifa members and local BLM activists attempting to bar them from Black Lives Matter Plaza, an area near the White House. At least two local Black churches had Black Lives Matter banners torn down and set ablaze.

On Monday, police arrested the leader of the Proud Boys, Henry "Enrique" Tarrio, 36, after he arrived in Washington ahead of this week’s protests. Tarrio was accused of burning one of the Black Lives Matter banners in December and was found with two high-capacity firearm magazines, police said. A judge signed an order Tuesday banning Tarrio from entering the District of Columbia, with very limited exceptions related to his criminal case. 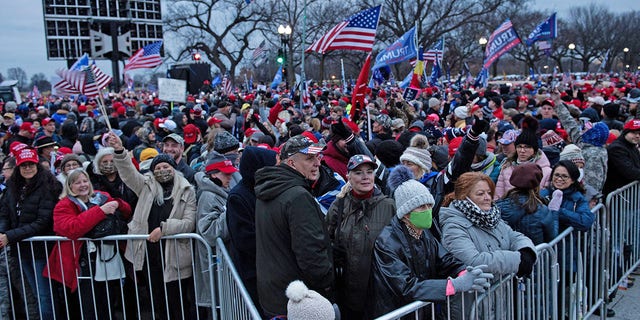 People wait for a rally of supporters of President Donald Trump challenging the results of the 2020 U.S. presidential election on the Ellipse outside of the White House on January 6, 2021, in Washington, DC. (Photo by Brendan Smialowski/AFP via Getty Images)
(AP)

Machona said part of D.C. National Guard’s duties this week will be to support police and fire/EMS on road closures and at Metro stops. Heightened security measures are being taken around the Capitol Hill complex, and Metropolitan Police has advised that there will be extensive parking restrictions and street closures throughout the District of Columbia.

When moving to and from the House Office Buildings and the Capitol, U.S. Capitol Police has encouraged members of Congress and staff to use the underground access points and the Cannon and Rayburn tunnels in lieu of walking outdoors or driving to the Capitol plaza, according to a security memo sent Tuesday. Members were encouraged to arrive before 9 a.m. Wednesday.

In addition to the National Guard, federal agents were on standby, in case they were quickly needed.

The federal Bureau of Prisons said about 100 "specially trained officers" were sent to the Justice Department headquarters to assist other security personnel but would remain "in a reserve capacity unless needed." The Department of Homeland Security, meanwhile, said that unlike during the unrest in May and June in Washington, it did not plan to deploy agents from Customs and Border Protection to the demonstration Wednesday.

A number of prominent Trump supporters were expected to attend rallies Wednesday, including Texas Attorney General Ken Paxton and Trump ally Roger Stone, the recipient of a pardon by the president. Stone was convicted of lying to Congress during the investigation into Russian interference in the 2016 election and sentenced to three years in prison. Trump commuted the sentence as Stone pursued an appeal and later issued a full pardon.

Former Trump national security adviser Michael Flynn, whom the president also pardoned after he was twice convicted of lying to the FBI in special counsel Robert Mueller’s Russia investigation, had addressed the pro-Trump rally in Freedom Plaza on Tuesday.

Fox News' Bradford Betz and the Associated Press contributed to this report.