Dead man’s parents can use his sperm to create his child, judge rules

Months after military cadet Peter Zhu died from injuries sustained in a tragic skiing accident – and lost what his parents said was his dream to have children of his own – a judge has ruled that his parents may use his frozen sperm to create a child.

New York State Supreme Court Justice John Colangelo ruled last week that Zhu's parents, Yongmin and Monica Zhu, may decide what to do with their son's sperm, including whether to use it for "procreative purposes."

The parents filed a court petition in March to retrieve their only son's sperm before he was removed from life support, calling it their "one and only chance of fulfilling Peter's wishes and preserving his incredible legacy" and to carry on the family name. 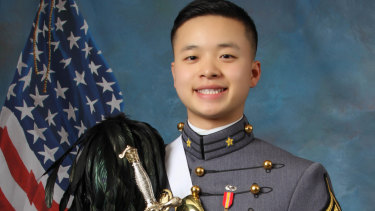 "At this time, the court will place no restrictions on the use to which Peter's parents may ultimately put their son's sperm, including its potential for procreative purposes," the judge wrote in his ruling.

"As far as the court can discern, no such restrictions are mandated by either New York or federal law.

"That is not to say, however, that petitioners may not need to surmount certain obstacles, or confront important residual issues should they choose to seek to use Peter's sperm for reproductive purposes." 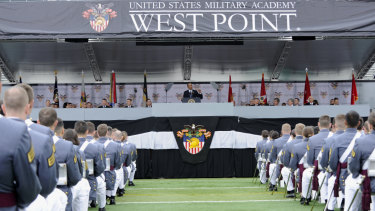 Peter Zhu was a cadet at the US Military Academy West Point.Credit:AP Photo/Susan Walsh

The parents' attorney, Joseph Williams, could not immediately be reached for comment.

Zhu, from Concord, California, had expressed a desire to have a family of his own, his parents said.

The 21-year-old senior at the US Military Academy at West Point in New York had discussed his dreams with his parents, telling them he wanted to be a father – to five children – and raise them on a ranch, despite their teasing him that such a brood would be expensive, his parents wrote in their March 1 petition.

For a senior class assignment, Zhu recently wrote that he wanted to get married "before 30," have kids and "become a career officer in the military," according to court records.

"Our son's dying wish was to become a father and to bring children into this world," his parents said.

But Art Caplan, a professor of bioethics and head of the division of medical ethics at New York University's school of medicine, said the case is "an ethical quagmire".

He said there is no set system for asking people what they want for their genetic material after their death and no set system for making that determination in court when they have not legally made their wishes known.

That, Caplan said, leaves many ethical considerations, particularly about what's in the best interest of the child – would the deceased parent have wanted the child to be created using a surrogate?

Regarding the Zhu case, Caplan said he disagrees with the judge's decision because he does not believe parents should have control over their children's reproduction. 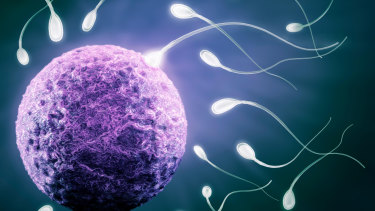 The High Court will determine whether a sperm donor can be considered a parent.Credit:Alamy

"It doesn't exist in nature," he said.

He added that he thinks such allowances should be made only for partners or spouses.

In February, Zhu was gravely injured in a skiing accident on the West Point ski slope, fracturing his spinal cord, according to court documents.

"Peter's death was a horrific, tragic and sudden nightmare that neither of us could have prepared for," his parents wrote in the March 1 court filing, seeking the judge's permission to obtain their son's genetic material.

"We are desperate to have a small piece of Peter that might live on and continue to spread the joy and happiness that Peter brought to all of our lives."

The case involving a medical procedure long fraught with ethical concerns, heartbroken parents and the pressures of cultural expectations was brought to a head hours later, when a judge directed the Westchester Medical Center in Valhalla, New York, where Zhu was being kept on life support, to retrieve the sperm and store it.

It wasn't until last week that a judge decided the parents could use it.

The ethics of postmortem sperm retrieval

Since it was first performed about 40 years ago by Cappy Rothman, a Los Angeles-based urologist, postmortem sperm retrieval has prompted questions of its ethical implications, The New York Times reported in 2004.

"Is it appropriate to consciously bring a child into this world with a dead father?" Alexander Capron, a professor of law and medicine and co-director of the Pacific Center for Health Policy and Ethics at the University of Southern California, told The Associated Press in 1999.

That year, a woman made history in the United States when she successfully gave birth to a child using sperm extracted from her dead husband, the AP reported at the time.

"Would we want, at the moment that a death occurs, to have doctors asking: 'Do we harvest eggs? Do we harvest sperm?'" Capron asked. "This is not for the betterment of the human condition."

Other studies have attempted to answer equally challenging questions, chief among them: How can you make sure the wishes of the deceased are being respected?

In April 2000, researchers concluded that written or verbal consent documented by a health care provider would be "desirable" but not "an absolute requirement," according to a paper published in the peer-reviewed journal Human Reproduction.

The paper noted that it is "possible that in some cases a reasonable inference can be made if the patient has previously discussed these matters with family members."

Carrying on the family's lineage

The Zhus laid out their son's detailed plan for fatherhood in the petition.

But beyond his personal desire for a big family, the couple said their son's legacy also needed to be preserved "for deeply cultural reasons."

Zhu was the sole male child in his family, and in Chinese culture, only sons can pass down a family name, his parents wrote in their petition.

"When Peter was born, his grandfather cried tears of joy that a son was born to carry on our family's name," they said.

"Peter took this role very seriously, and fully intended to carry on our family's lineage through children of his own."

Without Zhu's children, his parents wrote that it would be "impossible" for their lineage to continue and that the "family name will die."

On March 1, the parents insisted that retrieving the sperm needed to happen before 3pm, when their son, an organ donor, was scheduled to undergo an organ removal procedure.

The doctors had informed them that retrieval would not be possible after Zhu's organs were removed, the filing said.

According to the documents, the hospital had a urologist who was "ready and willing" to perform the procedure as long as the couple obtained a court order.

The Westchester Medical Center Health Network said at the time that "out of respect for patient and family privacy" it does not discuss the specifics of any cases.

"However, from time to time, like most hospitals, Westchester Medical Center is presented with complex legal and ethical situations where guidance from the court is appropriate and appreciated," the statement said, adding that the center "is grateful the family sought a court order during such a difficult time."