Beach huts have soared in demand as Britons look to holiday at home for a second year amid concerns foreign trips will be banned.

Prices to buy and rent the wooden shacks have rocketed despite most having few utilities and mainly being used for storage.

Property website OnTheMarket found estate agents have seen searches surge by 259 per cent this month compared to six months ago.

But there is a shortage of huts available across the country, with the average price increasing from £27,805 to £35,919 since September last year.

Mudeford in Christchurch, Dorset, has the most expensive ones in Britain – where they regularly sell for over £300,000.

Resorts that before the first lockdown had unwanted beach chalets on their books for months sold them as soon as the country opened up last summer.

Many estate agents have lengthy waiting lists of people eager to get their hands on a coastal getaway. 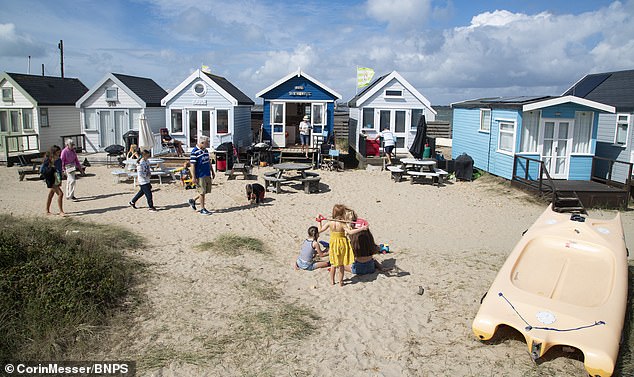 Prices to buy and rent the wooden shacks have rocketed despite most having few utilities and mainly being used for storage. Pictured: Mudeford in Dorset 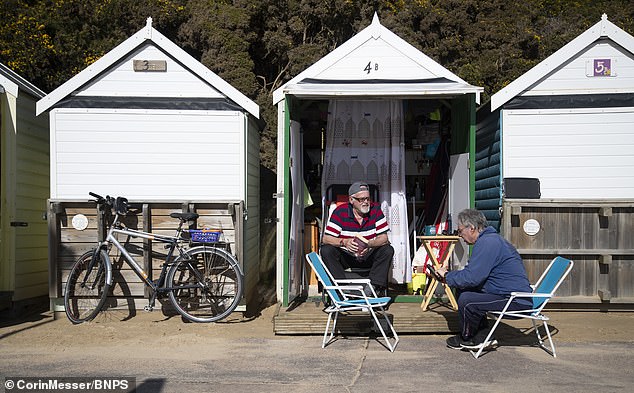 Where are the best beaches to get a hut?

Vikki Bennett, from OnTheMarket, said: ‘Having spent significant amounts of time at home under lockdown restrictions, it’s no wonder that increasing numbers of pent-up Brits are now attracted to the idea of buying a beach hut to own a slice of the outdoors.

‘And while many people may be reluctant to travel abroad this summer due to the pandemic even if restrictions are lifted, it seems likely that the popularity of beach huts is set to increase even further.’

On Monday the government brought in £5,000 fines for going abroad on holiday when a ban on leaving the UK without ‘reasonable excuse’ was announced.

The threat of fines was extended until July, making foreign summer holidays look increasingly unlikely as a third wave of coronavirus sweeps across Europe.

Health officials are increasingly concerned by a surge in cases of the South African Covid variant across the Channel.

A senior minister even suggested the whole of the Continent could be put on the red list because of the botched vaccine rollout.

Quarantine-free holidays may not be possible until August, killing off hopes of trips abroad until late summer. 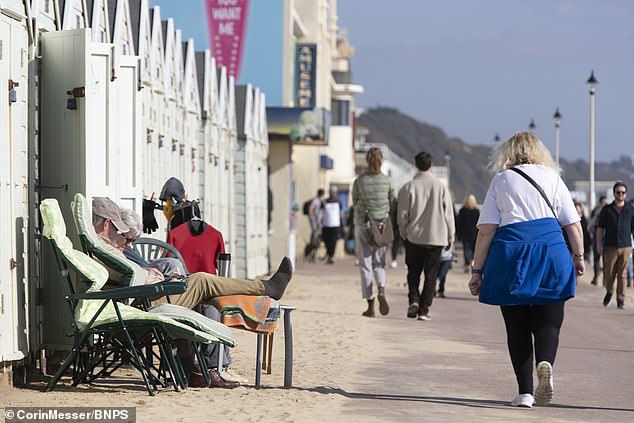 There is a shortage of huts available across the country, with the average price increasing from £27,805 to £35,919 since September last year. Pictured: Bournemouth

A ‘traffic light’ system is under consideration, allowing travel to ‘green’ countries without the need for quarantine on return.

Estate agent Bob May from May’s in Bognor Regis, West Sussex, said he had eight beach huts for sale in February 2020 with no interest.

But as soon as things reopened after the first lockdown he sold them all and now has a waiting list of about 100 people hoping to buy one.

Mr May said: ‘The demand has been astonishing. I now have a register of around 100 people hoping to buy one. 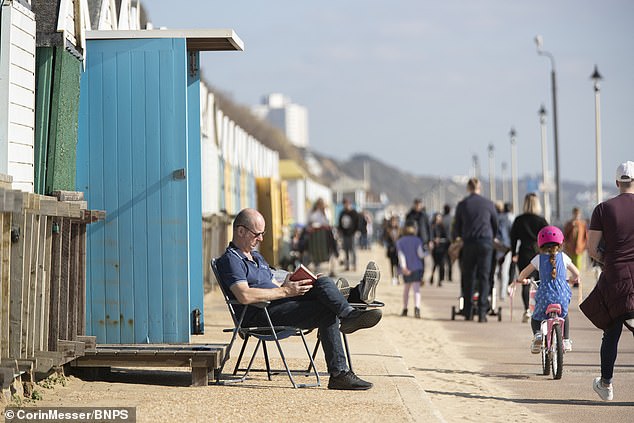 Resorts that before the first lockdown had unwanted beach chalets on their books for months sold them as soon as the country opened up last summer. Pictured: Bournemouth

Jo Tyler, at agents Belton Duffey in Norfolk, said: ‘Demand has probably doubled for beach huts this year in the wake of the pandemic.

‘It seems that because a lot more people are out and about locally, they are spotting the beach huts and enquiring about buying them.

‘They’ve always been popular but even more so now, people want to enjoy the outside spaces and have somewhere to visit.’

The front of the 16ft by 10ft wooden cabin on the exclusive Mudeford Spit in Christchurch, Dorset, points inland with a view over a lagoon.

The back faces towards the sea, but there are some other huts in the way that prevent an uninterrupted view. The hut also lacks a toilet or washing facilities. 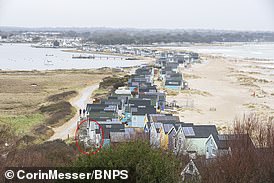 The front of the 16ft by 10ft wooden cabin (circled) on the exclusive Mudeford Spit in Christchurch, Dorset, points inland with a view over a lagoon. The back faces towards the sea, but there is another hut in the way

Meanwhile, a six-bedroom house in Manchester with four bathrooms and off road parking was recently listed on Zoopla for £320,000.

The hut already has a waiting list and is expected it to be snapped up quickly thanks to Covid-related demand for staycations and Brexit making it more complicated to buy holiday homes on the Continent.

He said: ‘We’ve probably sold around 10 huts this year and we don’t have any available now.

‘The huts don’t have any utilities so you can’t stay overnight, you can enjoy a cup of tea or a bacon sandwich using a gas stove, but they are mostly for storage.

‘We used to see around two or three enquiries for each one but that has risen over the last year.’

Chris Hope, from Dawsons in Swansea, said: ‘Beach huts have always been popular in this part of the world but demand has definitely escalated because of lockdown.

‘I also think that lockdown has given those who already own a hut more reasons to appreciate it when the restrictions lift – they will be delighted to use them again and probably use them more.’

At Avon Beach in Christchurch there are about 60 beach huts that are up for rent.

Beach hut manager Laura Huxtable-White said: ‘We are near enough booked up not only for this year but for next winter as well.

‘All of our long term lets, which are April to July and July to August, have gone as have the weekly lettings for the summer.

‘Even the winter lettings from October to next March have been booked up. It is people who now realise they can’t go abroad this summer but still want something of a beach holiday who have been booking.

‘We fixed our prices last October for this year but we could have sold out two times over.’

Andrew Denison, of Denisons estate agents, specialise in selling exclusive beach huts at Mudeford, Christchurch, for eye-watering prices of over £300,000.

He said: ‘There is a shortage of huts coming on the market but we still have a waiting list of people wanting to buy one.

‘There is a lot of demand at the moment from people who can’t go abroad.’

Transport Secretary Grant Shapps is leading a taskforce that will report by April 12 on how and when the ban on non-essential travel can be lifted.

It can be no sooner than May 17 under Boris Johnson’s official roadmap out of restrictions.

That might mean the need to quarantine after foreign trips would stay in place until at least August.