Dharmsala, India: Hundreds of Tibetans in exile braved the rain and cold in Dharmsala on Sunday to vote in a new political leader.

The voters wore masks, maintained social distance and used hand sanitiser as they cast their ballots during the first round of the election in the northern Indian city, where the exiled government is based. 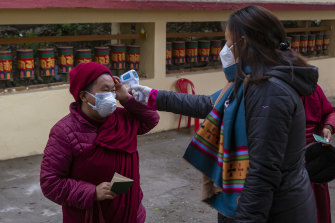 A Tibetan Buddhist nun has her temperature checked at the polliing station in Dharmsala, India on Sunday.Credit:AP

In this first phase of voting, two candidates for the top government post of president will be shortlisted, including 90 parliamentarians. The second and final round of voting will take place in April.

“By this we are sending a clear message to Beijing that Tibet is under occupation, but Tibetans in exile are free. And given a chance, an opportunity, we prefer democracy,” said Lobsang Sangay, who will soon be finishing his second and final term as the Tibetan political leader.

Formed in 1959, Tibet’s government-in-exile – now called the Central Tibetan Administration – has executive, judiciary and legislative branches, with candidates for the office of sikyong, or president, elected since 2011 by popular vote. 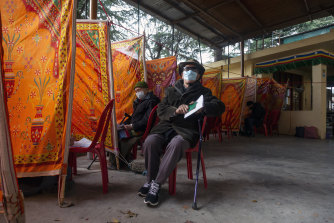 Voting takes place in Dharmsala on Sunday to elect a new political leader.Credit:AP

China says Tibet has been part of its territory since the mid-13th century, and its Communist Party has governed the Himalayan region since 1951. But many Tibetans say that they have been independent for most of their history, and that the Chinese government wants to exploit their resource-rich region while crushing their cultural identity.

The Dalai Lama, the Tibetans' exiled spiritual leader, and his followers have been living in Dharmsala since they fled Tibet after a failed 1959 uprising against Chinese rule.

Many young Tibetans are contesting the parliamentary election this year. As the Dalai Lama grows older, there is a growing realisation among the Tibetan youth that they should participate more in the government.

“As somebody who has studied technology, I believe I can try and make the parliamentary communications more secure and fill the gaps in information database,” said Lobsang Sither, 48, who is contesting the current election.

Sither said that the previous governments have largely focused on the Tibetan diaspora and not enough on Tibetans inside Tibet.

“That has to change. Unless we have reliable information on the situation inside Tibet, we cannot formulate policies to assist Tibetans there,” said Sither.

China does not recognise the Tibetan government-in-exile, and hasn’t held any dialogue with the representatives of the Dalai Lama since 2010. Despite hosting exiles, India considers Tibet to be part of China. 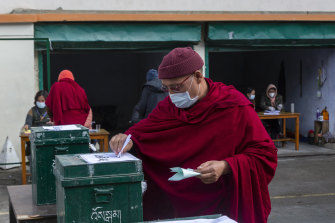 A monk casts his ballot.Credit:AP

There is, however, support elsewere. The US Congress passed legislation in December that reaffirmed the rights of Tibetans to choose the Dalai Lama's successor.

China regards the exiled Dalai Lama as a dangerous "splittist" and the latest show of support from the US Congress could increase already tense ties between the two countries.

The legislation calls for the establishment of a US consulate in Tibet's main city of Lhasa and the preservation of Tibet's environment.

Environmental groups and Tibetan rights activists have expressed concern about China's hydropower ambitions in the region, saying they could affect downstream water supplies.

China seized control of Tibet after its troops entered the region in 1950, in what it calls a "peaceful liberation". Tibet has since become one of the most restricted and sensitive areas in the country.

China has said its leaders have the right to approve the Dalai Lama's successor, which many see as a coercive attempt to control Tibet, where ethnic Tibetans make up about 90 per cent of the population.

China accuses the US of trying to destabilising the region by interfering in its internal affairs.

Some Tibetan groups advocate independence for Tibet, since little progress has been made in dialogue with China.