Washington: An influential Democratic Party senator has launched a blistering attack on Joe Biden for suggesting coal plants should be shut down across the US, accusing the president of being “divorced from reality” and saying it was “time he learnt a lesson”.

In a major blow three days before the midterm elections – and only hours before Biden, Barack Obama and Donald Trump headlined duelling rallies in the critical swing state of Pennsylvania – Senator Joe Manchin lashed out at the president and demanded an apology to voters reliant on coal mining jobs. 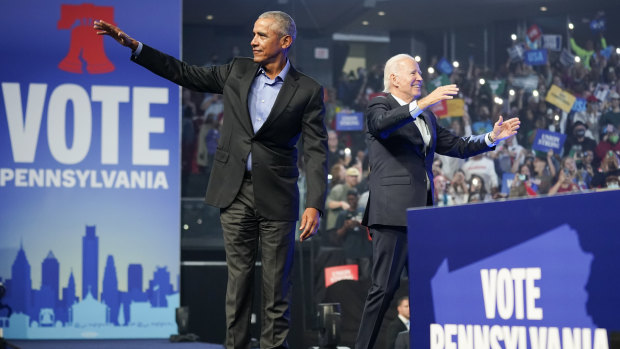 “Comments like these are the reason the American people are losing trust in President Biden and instead believe he does not understand the need to have an all-in energy policy that would keep our nation totally energy independent and secure,” said Manchin, a moderate Democrat who has links to the coal industry in his state of West Virginia.

“It seems his positions change depending on the audience and the politics of the day … It is time he learn a lesson that his words matter and have consequences.”

The scathing rebuke came after Biden, while spruiking new manufacturing and research laws in California on Friday, remarked that: “We’re going to be shutting these plants down all across America and having wind and solar.”

While the White House later sought to clarify the comments, claiming they had been “twisted to suggest a meaning that was not intended”, Manchin’s blast could be deeply damaging for the Democrats, who are on the brink of losing their narrow congressional majority at this week’s midterms due to soaring inflation and cost of living pressures.

If that happens, it will make it harder for Biden to deliver on his agenda for the next two years, while paving the way for Donald Trump’s expected White House run in 2024.

The timing could not have been worse, coming just before Biden and Obama made a rare joint appearance in Philadelphia to rally the base amid voter discontent over the economy, and the growing cost of everything from fuel, to food and housing.

About 400 kilometres away, Trump also headlined a rally in the regional city of Latrobe, stumping for two of his endorsed candidates: celebrity doctor Mehmet Oz, who is vying for a seat in the Senate against Democrat rival John Fetterman, and far-right state politician Doug Mastriano, who is trying to become Pennsylvania state governor against former attorney general Josh Shapiro. 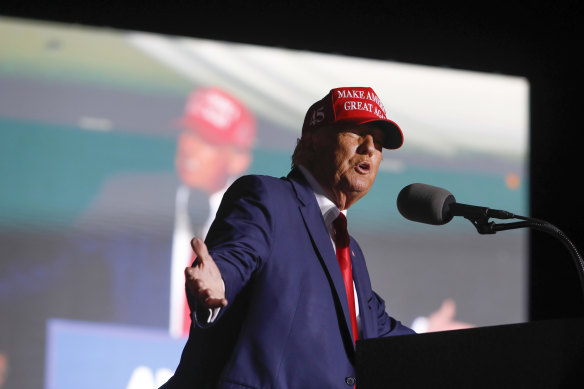 Standing near a massive sign saying “Joe Biden Owes Pennsylvanians Gas Money”, Trump accused the Democrats of “waging a war on Pennsylvania energy”, putting jobs at risk, and being responsible for cost of living increases.

He also hinted, yet again, that he would soon make a decision about his plans to run for the presidency – an announcement that Axios reported last week could happen as soon as November 14.

“I’m not going tell you right now,” Trump teased, as the crowd cheered feverishly. “But I promise you, in the very next – very, very, very short period of time – you’re going to be so happy.”

The fact that three presidents descended on Pennsylvania is a sign of how critical this battleground is to the midterm elections on November 8, which will decide who controls the US Congress – and in turn, the direction of the country for the next two years.

Pennsylvania was seen as the Democrats’ best chance of picking up a seat in the Senate, which could have given the party the balance of power in the all-important chamber.

However, a recent debate in which Fetterman, who is still recovering from a stroke, struggled to put sentences together has raised concerns about his fitness for the job and the lack of transparency from his campaign about the state of his health.

Fetterman received a much-needed boost this week when Oprah Winfrey, who is largely responsible for launching the career of “Dr Oz”, endorsed Fetterman – a move Democrats hope will boost their chances among women and the black community.

Obama also talked up the importance of voting in the midterms, where turnout is traditionally lower than presidential elections, and where the tide tends to swing against the party who controls the White House.

“When I was president, I got my butt whooped in midterm elections,” he told the crowd, before explaining the consequences.

“If we had kept the Senate in 2014, we’d have a very different Supreme Court making decisions about our most basic rights. So, midterms are no joke.”

The former president has been crisscrossing the state in a bid to boost the Democrats’ fortunes as they fend off an expected “Republican red wave”. To that end, Manchin’s comments were a blow to the party, fuelling the Republican narrative that Biden is out of touch with the plight of struggling Americans.

The controversial Senator is known as a “hold out” within his party because of his propensity to vote against Democrats in the interest of West Virginia, a traditionally conservative state that backed Trump for president.

In response to Manchin’s comments, the White House issued a statement saying the president was speaking about an ongoing “energy transition” which would help “all Americans in all parts of the country, with more jobs and better opportunities”.