‘Progressive’ Democrats have been slammed for penning an open letter to Joe Biden calling on him to negotiate a ceasefire in Ukraine with Vladimir Putin.

Thirty left-wing politicians – among them Alexandria Ocasio-Cortez and Ilhan Omar – wrote to Biden on Monday saying that ‘direct talks with Russia’ to ‘seek a rapid end to the conflict’ should be his ‘top priority’.

Within hours the group had been forced to backtrack, but it will do little to assuage fears in Kyiv that the West’s support – which has been crucial in halting Russia’s bloody assault – could falter as the cost of Putin’s war on energy begins to bite. 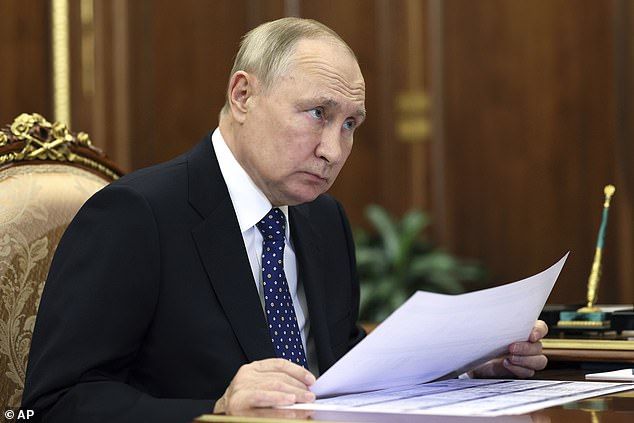 Negotiating a ceasefire in Ukraine with Vladimir Putin should be America’s ‘top priority’, at least according to dozens of left-wing US Democrats 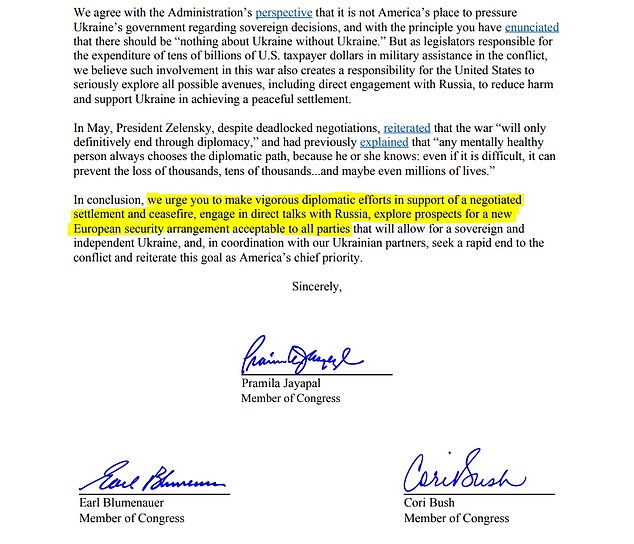 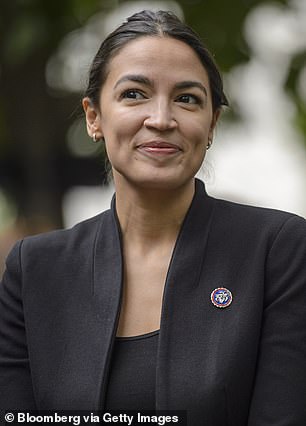 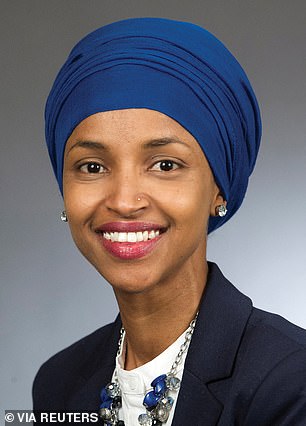 In the letter, a copy of which was published online, the group say they support ‘Ukraine’s legitimate struggle against Russia’s war of aggression’ and want to see ‘a sovereign and independent Ukraine.’

But they also urge Biden to ‘explore prospects for a new European security arrangement acceptable to all parties’ and to seek ‘a negotiated settlement and ceasefire’ with the Kremlin.

That suggestion caused fury in Ukraine, with journalist Anastasiia Lapatina tweeting that ‘Russia does not accept a sovereign Ukraine – how many times does this have to be reiterated?’

Her frustration was shared by General Hertling who said Ms Lapatina was ‘exactly right’ and the politicians had been ‘exceedingly naive about this crucial point.’

Mr Browder, who ran Russia’s most successful venture capital firm until a crackdown by Putin’s regime saw his lawyer and friend – Sergei Magnitsky – beaten to death, added that it ‘makes my blood boil’.

‘[They] want the US to reward Putin’s murderous aggression,’ he added. ‘We all know where appeasement goes and it’s nowhere good.’

Putin launched an all-out war against Ukraine eight months ago having under the guise of protecting Russia for NATO expansion.

But, in speeches delivered since then, he has ranted about the ‘historical mistake’ of allowing Ukraine its independence and vowed to right the wrongs of history that Russia suffered when the Soviet Union collapsed.

Putin has asserted that Ukraine has no right to statehood, that Ukrainians and Russians are really one people longing to be reunited, and has sought to demonise any Ukrainian who resists as being in thrall to a ‘Nazi’ regime in Kyiv.

The Russian leader and his media puppets have also posited the war as one against the West, vowing to establish a so-called ‘multipolar order’ in which Washington would have to kowtow to Moscow.

Experts and analysts say any ceasefire negotiated with Putin would simply allow him to freeze the conflict, repair his beleaguered army, and then attack again at a time of his choosing – as he did after the last invasion of Ukraine in 2014.

Any guarantee that Moscow gives regarding Ukraine’s security would be near-impossible to trust, experts add, because Russia had already agreed never to use force against its neighbour after Kyiv agreed to give up its nukes back in the 1990s.

The Kremlin spent weeks in late December and early January vowing it had no plans to invade the country, before launching an all-out assault.

Moreover, Ukrainians themselves show absolutely no appetite for ending the war and President Zelensky has vowed never to negotiate with Putin.

A Gallup poll conducted a week ago showed 70 per cent of Ukrainians believe their country ‘should continue fighting until it wins the war’.

Zelensky, meanwhile, said he has nothing to discuss with Putin after the despot annexed the occupied parts of Ukraine to Russia in sham referendums.

‘Ukraine will not hold any negotiations with Russia as long as Putin is the president of the Russian Federation,’ he said at the time.

‘We will negotiate with the new president.’

As the war has gone from bad to worse for Putin, he has resorted to energy price wars, attacks on Ukrainian civilians, and nuclear threats in an attempt to fracture the alliances upon which Kyiv relies and break people’s will to keep fighting. 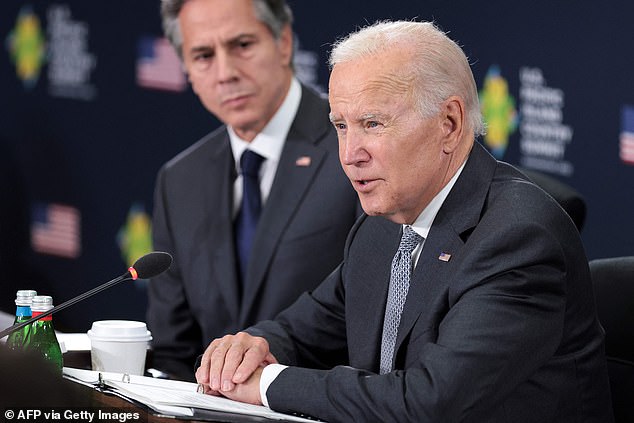 A third of Ukraine’s power plants have been destroyed over the last fortnight in Russian missile and suicide drone attacks, that have left Ukrainians cuddling their pets to keep warm as blackouts plague the country and winter sets in.

Meanwhile his throttling of gas supplies by shutting down the Nord Stream 1 pipeline has been driving up the cost of energy in Europe and the US.

Missiles and drones have also been used indiscriminately against civilians, killing dozens and wounding hundreds in the last couple of weeks alone.

Moscow is now warning that Ukraine is preparing to use a ‘dirty bomb’ – a charge laced with radioactive material – on its own territory, sparking fears that it is laying the groundwork for its own use of nuclear weapons.

Putin has also threatened the West directly with Russia’s long-range arsenal, prompting Biden to warn that ‘Armageddon’ is closer than at any time since the Cuban Missile Crisis.

However, experts including the Atlantic Council’s Andriy Zagorodnyuk have argued that the West must not give in to ‘nuclear blackmail’.

‘The current rush to appease Moscow is deeply unnerving’, he wrote last week.

‘Giving in to Putin’s nuclear blackmail would not end the war in Ukraine.

‘What it would do is set a disastrous precedent that makes a future nuclear war far more likely while encouraging dozens of countries to acquire nuclear arsenals of their own.’

Russia is now more than eight months into a war that was supposed to last only a few days, and is struggling to hold on to the meager gains it has made on the battlefield.

Ukraine has pushed Moscow’s forces back in both the north and south of the country, and is thought to be closing in on the southern city of Kherson.

Sergei Surovikin, Russia’s top commander in Ukraine, has begun laying the groundwork for a retreat from the city – which is the only regional capital captured by the Kremlin’s forces and the main city in a province Putin annexed.

Losing it to Ukraine would be the most embarrassing defeat that Putin’s army has yet suffered, and open the door to a Ukrainian assault on Crimea – the crowning glory of his last war in Ukraine.