One of the defining features of the Victorian government over the past few years has been the extraordinary levels of spending on new buildings and infrastructure. Billions upon billions are being spent on transport projects, housing projects, hospitals and community infrastructure. It even has its very own marketing spin: “Victoria’s Big Build”.

With this level of public investment in projects, it was unfathomable to see the state government slash $600,000 from the Office of the Victorian Government Architect (OVGA) in the recent budget papers. This cut is minuscule in the context of the state budget, but represents a reduction of more than 40 per cent in core funding to a small and discrete office that is of critical importance for our state. 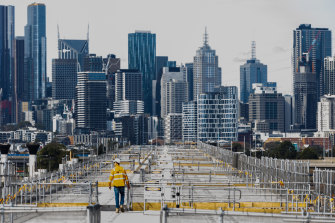 A worker on top of the elevated road that will tower over Footscray Road, connecting the west to the CBD as part of the massive multi-billion dollar Westgate Tunnel project.Credit:Jason South

The reason the OVGA is so important, is that they provide critical knowledge and independent advice to both state and local governments on how to achieve quality buildings and spaces for the community. They are the safeguard against billions of dollars of public funds being wasted on buildings that are poorly conceived, too costly to maintain, or poor value for money. In many cases, their work might be preventing the wrong type of building being built, by advising a change in project brief and scope, or by identifying opportunities that would otherwise go unrealised.

Poor design is expensive and this is where the public has a vital interest in making sure that our taxes are well spent. When we hear about the proposed construction of a $1 billion hospital, what many don’t appreciate is how this represents only about 3 per cent of the overall cost. Maintenance over the life of the building, is around four times more than construction costs, whilst operating the building represents a whopping 85 per cent of the total cost. The actual design cost of the hospital, which impacts upon all these other costs, makes up a tiny 0.5 per cent of the total.

All of these benefits rely upon governments having the knowledge to ask the right questions, for the right type of building, with the right design requirements. It requires these projects to have a rigorous design and procurement process that is interrogated independently, and then built in a way that reduces risks to taxpayer money. This expertise is what the government architect’s office provides.

In addition to their work on significant projects, the OVGA is also critical in the development of policies that impact how the private sector shapes our built environment. The better apartment standards are an excellent example of policy that is dramatically lifting the liveability and ultility of buildings that would otherwise be designed to achieve maximum developer profits. The development of these policies needs rigorous architectural expertise that is independent and entirely focussed on the public interest.

Before the cuts, the OVGA consisted of just 15 full time equivalent staff including non-technical personnel along with a group of experts that are commissioned on an as-needs basis for providing advice through the design review panel. This small team just over the past three years has provided guidance on 187 projects with a construction value of over $25 billion.

This gold mine of expertise is running on a shoe string budget, triaging projects so that their time is given to only the most significant. This leaves many worthy projects, particularly in regional areas without expert independent advice or guidance. With the state government planning to spend $2.6 billion on infrastructure and housing for the 2026 Commonwealth Games we need to ask, will these projects leave an enduring legacy, or will they be white elephants that are too costly to maintain, are no longer useful and will be torn down in 10 years time?

If we are in any way serious about getting better design we need a properly funded OVGA that is expanded in response to increased demand not hobbled. With the Victorian public service no longer operating a public works department, the OVGA is at times the only safeguard to quality. Their work behind the scenes is in many cases the difference between taxpayer money being used to build assets or future liabilities.

The most frustrating part of the cuts to the office is that this is a public service that pays for itself. Independent economics analysis by SGS Economics has found that just in the last three years the OVGA had saved over $20 million of public funds just by reducing construction risks on projects alone. These savings more than cover its operating costs, and you would think would also justify an expansion of their funding and operations.

Perhaps if the office was renamed “Department for saving taxpayers billions from being spent on bad buildings” politicians would think twice about cutting it in half.

Michael Smith is an architect and a director of architecture practice Andever.