The Los Angeles County sheriff says detectives have determined what caused Tiger Woods to crash his SUV last month in Southern California but would not release details Wednesday, citing unspecified privacy concerns for the golf star.

The claim by LASD chief Alex Villanueva that his deputies needed permission from Woods to reveal the findings of their investigation struck legal observers as odd.

Villanueva has been criticized for his handling of the probe. He declined to ask a drug recognition expert to examine Woods immediately after the February 23 crash in order to test for possible signs of impairment.

Villanueva announced on the day of the accident that Woods was driving alone in good weather, and that his deputies ‘did not see any evidence of impairment.’

The following day, the sheriff said the crash was ‘purely an accident,’ and therefore there had been no need to bring in a drug-recognition expert, or a DRE. 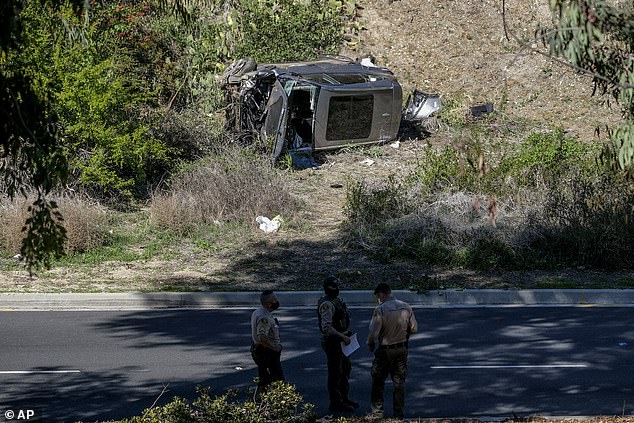 The Los Angeles County Sheriff’s Department has wrapped up its investigation into the February 23 crash that left golf superstar Tiger Woods severely injured. The image above shows LASD investigators at the scene of the crash in the Los Angeles suburb of Rancho Palos Verdes on February 23 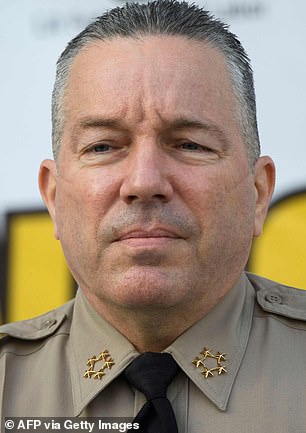 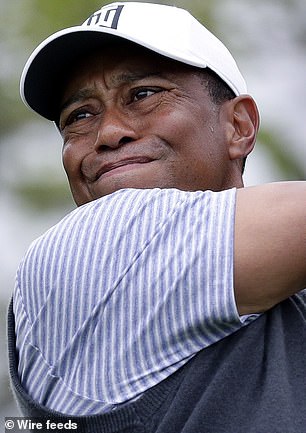 But according to several forensic experts who spoke to USA Today Sports, based on the evidence in the case, including an affidavit from a resident who was the first to arrive at the scene of the crash, the legendary golfer was possibly inattentive or asleep when the SUV went into the median instead of staying in his lane.

Woods told deputies – both at the wreckage and later at the hospital – that he did not know how the crash occurred and didn’t remember driving, according to the affidavit that was filed earlier this month.

Woods suffered serious injuries in the crash when he struck a raised median at around 7am in Rolling Hills Estates, just outside of Los Angeles.

The Genesis SUV he was driving crossed through two oncoming lanes and uprooted a tree on a downhill stretch that police said is known for wrecks.

Woods is in Florida recovering from multiple surgeries.

He was unconscious when a witness first approached the mangled SUV.

But a sheriff’s deputy said the athlete later appeared to be in shock but was conscious and able to answer basic questions.

Investigators did not seek a search warrant for Woods’ blood samples, which could be screened for drugs and alcohol.

Police say Woods was travelling at a high speed when he hit a raised median, smashed through a wooden road sign, splintered a tree and then rolled his SUV off the wrong side of the road where it came to rest at the bottom of an embankment

Experts claimed that evidence in the case, including lack of skid marks on the roadway that would have indicated the driver’s attempt to brake, suggests that Woods possibly dozed off

Charles Schack, a former New Hampshire state police trooper who is now president of Crash Experts, which analyzes traffic accidents, told USA Today that it would have made sense for deputies to invite a DRE to evaluate Woods for signs of impairment.

‘To an untrained person, sometimes the effects are a bit more subtle, and require a bit more in-depth examination to bring out the evidence of impairment,’ Schack said.

In his statement to the press a day after the crash, Villanueva explained that no field sobriety test was administered to Woods and no DRE was brought in because the start athlete had shown no signs of impairment whatsoever.

‘He was lucid, no odor of alcohol, no evidence of any medication, narcotics or anything like that would bring that into question,’ said the sheriff. ‘So that was not a concern at the time.’

In 2017, Woods checked himself into a clinic for help in dealing with prescription drug medication after a DUI charge in his home state of Florida.

Detectives, however, did obtain a search warrant for the data recorder of the 2021 Genesis GV80 SUV, known as a black box.

Villanueva would not say Wednesday what data had been found in the black box.

‘A cause has been determined, the investigation has concluded,’ Villanueva said during a live social media event Wednesday in response to a question posed by The Associated Press.

But Villanueva claimed investigators need permission from Woods – who previously named his yacht ‘Privacy’ – to release information about the crash.

‘We have reached out to Tiger Woods and his personnel,’ Villanueva said.

‘There’s some privacy issues on releasing information on the investigation so we’re going to ask them if they waive the privacy and then we will be able to do a full release on all the information regarding the accident.’

Woods’ agent at Excel Sports, Mark Steinberg, did not immediately respond to an email.

‘We have all the contents of the black box, we’ve got everything,’ Villanueva said.

‘It’s completed, signed, sealed and delivered. However, we can’t release it without the permission of the people involved in the collision.”

Greg Risling, a spokesperson for the Los Angeles County district attorney, said in an email Wednesday that no complaints against Woods had been filed through their office regarding the crash.

Villanueva’s statement about privacy issues did not make sense to Joseph Giacalone, a professor at the John Jay College of Criminal Justice and a retired New York City Police Department sergeant, who has criticized the sheriff’s response to the Woods incident from the start.

‘I don’t think I’ve ever seen a department ever ask for permission like that,’ he said.

‘What happens if his lawyers say “No, you can’t send it out now.” And then where does that leave us?’

Giacalone said it’s unlikely that deputies would have sought the permission of non-celebrity victims in similar crashes to release information.

If the sheriff’s hesitancy stemmed from a potential medical episode behind the wheel, Giacalone said authorities could simply say it was a medical emergency without giving additional details.

‘I don’t think they would have asked any family member of us if they can come out with it,’ he said.

Woods is from the Los Angeles area and was back home to host his PGA tournament, the Genesis Invitational at Riviera Country Club, which ended two days before the crash. He was driving an SUV loaned to him by the tournament.

Woods has never gone an entire year without playing, dating back to his first PGA Tour event as a 16-year-old in high school.

Jonathan Cherney, a former police detective-turned-accident reconstruction expert who walked the scene after the crash, said evidence in the case, including lack of skid marks on the roadway that would have indicated the driver’s attempt to brake, suggests that Woods possibly dozed off behind the wheel.

Cherney said the fact that Woods twice told deputies he couldn’t remember driving at all ‘absolutely’ is a clue pointing to impairment.

If a DRE had been brought in to question Woods about medications and check his vital signs, and ordered a blood test at the hospital, it could have resulted in a misdemeanor driving under the influence charge, had the results showed drugs in his system.

LASD sheriff’s Deputy Johann Schloegl previously told USA Today Sports that he did not seek a search warrant for Woods’ blood samples because there was no probable cause to do so, other than Woods’ history.