Disabled pervert, 50, who has flashed young women and girls for 13 years avoids jail after saying his behaviour may be due to his frustration at being wheelchair-bound 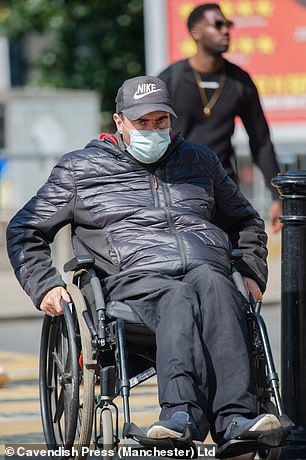 Lee Farrell (pictured), 50, is said to have left victims shaken, disgusted and terrified after flashing at them in a string of public places since 2008

A wheelchair-bound man with a 13-year history of exposing himself to girls as young as seven has been spared jail after suggesting his offending could stem from his ‘frustration’ at being disabled.

Lee Farrell, 50, is said to have left victims shaken, disgusted and terrified after flashing at them in a string of public places since 2008.

His latest victim was a 17-year-old girl who he flashed after she got off a tram in Bury, Greater Manchester, on October 12 last year.

When confronted he reportedly blustered: ‘I was just scratching!’, but the teenager was said to have been left feeling ‘very anxious’ and had a panic attack after the incident.

At Manchester’s Minshull Street Crown Court, Farrell, of Bolton, faced jail after he admitted causing a public nuisance and indecent exposure but was freed with a suspended sentence after a judge told him: ‘I’m going to give you a chance.’

It came after he was arrested for exposing himself to a woman while sat in his stationary Renault Laguna in a car park in 2008, before flashing two girls aged seven and 11 in a Morrisons supermarket in 2010 and targeting an eight-year-old girl playing hide and seek with friends in 2012.

Prosecutor Gavin Howie told the court how the latest victim had arrived at Bury Interchange at 7.10pm after getting a tram from Manchester city centre.

He said: ‘She saw this defendant in a wheelchair and he was staring at her from around eight feet away.

‘She was in the glassed off area of Bury Metro station and she gave him a “dirty look”.

‘She doesn’t say why. But she thought he was moving his hand near his groin area.

‘Then another male approached and the defendant moved away for a short time before returning.

‘She could clearly see he had his penis outside of his jeans and it appeared to be erect, and he was moving his hands up and down in a “jerking motion” and looking straight at her.

‘She shouted, “What the f**k are you doing?” and that alerted other service uses in the station.

‘She added: “What’s wrong with you!” whereupon the defendant looked scared and said, “I was just scratching.”

‘The other male asked if she was okay. The defendant moved off to Mill Gate Shopping Centre whilst the girl’s mum drove her straight to the police station, where she made a report.

‘The incident left her feeling very anxious and she said that she had a panic attack and she described the experience as “horrible”.’

Police were shown CCTV footage of the incident and were immediately able to identify the suspect as Farrell given his history. He was quickly arrested.

Mr Howie added: ‘The complainant has been affected, but it hasn’t been as bad as it might be. 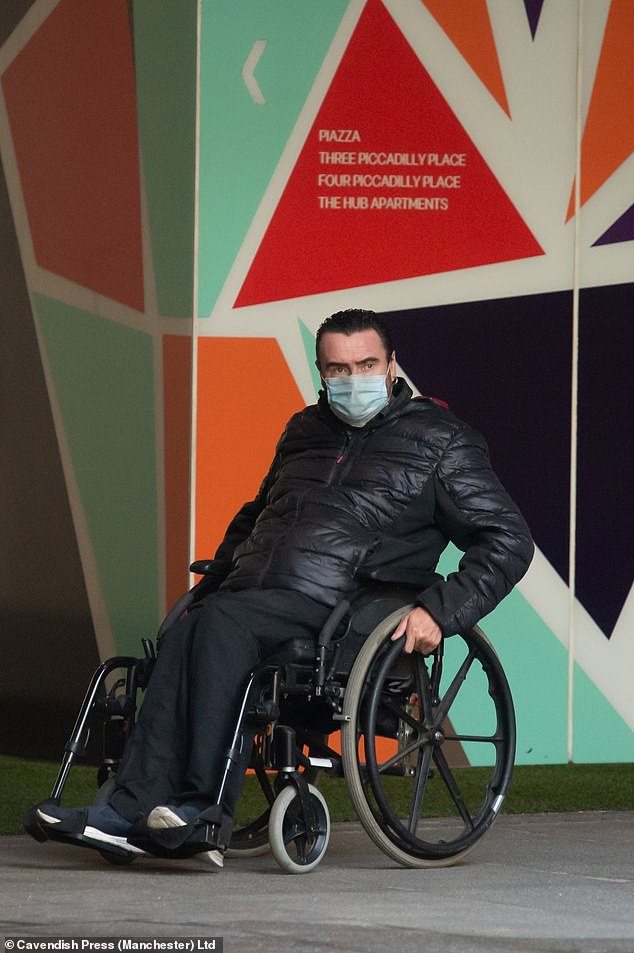 Farrell was previously arrested for exposing himself to a woman while sat in his stationary Renault Laguna in a car park in 2008, before flashing two girls aged seven and 11 in a Morrisons supermarket in 2010 and targeting an eight-year-old girl playing hide and seek with friends in 2012

‘He [Farrell] is deserving of full credit for his guilty plea. It saves [the victim] the ignominy of having to give evidence.’

Farrell had 13 offences on his record. In July 2008 he was convicted of outraging public decency after parked his car in a residential street and began exposing himself to passersby.

He was given a three year community order but in 2010, he targeted the two of her children after they were left playing in a family play area at a Morrisons supermarket while their mother was shopping.

He was jailed for 18 weeks but in 2012 he targeted an eight-year-old playing hide and seek with friends.

She had hidden behind a car when she saw Farrell approach in his wheelchair before exposing himself.

On a further occasion he boarded a tram at Piccadilly station in Manchester and carried out a sex act in front of horrified passengers while winking at a six-year-old child.

Farrell’s defence counsel Waheed Babar said: ‘He does accept responsibility for his actions. 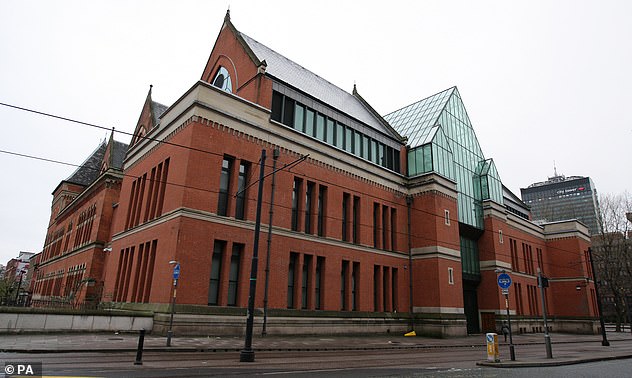 At Manchester’s Minshull Street Crown Court (pictured), Farrell, of Bolton, faced jail after he admitted causing a public nuisance and indecent exposure but was freed with a suspended sentence after a judge told him: ‘I’m going to give you a chance.’

‘He has had previous treatment programmes, but the programme now offered seems more in line with the weaknesses of Mr Farrell.

‘There does seem to be some confusion or a question as to his motivation – whether it’s sexual or a frustration as to his disability.

‘In the last pre-sentence report, it said that further work needs to be done to discover what his motivation is.

‘That’s something Mr Farrell is actively aware of. The programme that’s been offered by the probation service is one that is incredibly arduous.

‘One can see that this was sporadic offending. There are years when no offending takes place, and he is perfectly stable.

‘He is clearly sorry for his actions. He doesn’t understand why he does what he does.

‘Perhaps this programme will help him to find out why he offends in this nature.’

Sentencing Farrell, Judge Tina Landale told him: ‘You targeted this seventeen-year-old woman and intended to distress her and cause her to be disgusted and upset. Fortunately, she was helped by a member of the public.

‘The court is concerned because you have four previous convictions for identical behaviour, and it seems despite several attempts to stop your behaviour, it hasn’t stopped you. There has been a treatment programme in 2008 and again in 2013.

‘They worked for a period of time because there was a gap from 2013 to now when you stayed out of trouble.

‘Clearly, the protection of the public is the court’s priority today but I’m going to take a chance and suspend the sentence.’

Farrell was sentenced to nine months jail suspended for two years and was ordered to complete the Horizon counselling programme for sex offenders.

He was ordered to sign the Sex Offender Register for a further ten years.