A doctor who was convicted of attacking his wife with a broom handle as she scalded him for staying out all night with his friends has been banned from treating patients for nine months.

Dr Amjad Raja, 55, was arrested by police after he grabbed the plastic kitchen brush and hit spouse of 18 years Maria with it when he arrived back home from a night out at 6am – and she found a picture of a woman on his mobile phone.

During the breakfast time bust up, Raja a former research physician, who runs a laser treatment clinic in Manchester, followed his wife down the stairs after she woke him up and then struck her on at least two occasions including a strike to the face. 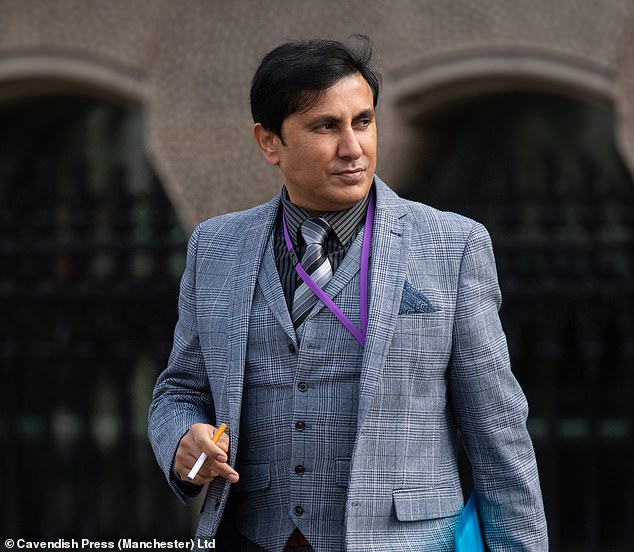 He also smashed her £500 phone into the wall, causing a dent in the plasterwork, and she suffered an injury to her thumb when the broom handle hit her hand whilst Raja was ‘aggressively swinging it around.’

In March last year, father of two Raja, from Cheadle Hulme, near Stockport, Greater Manchester was convicted of assault and criminal damage and was banned from contacting his wife for a year under the terms of a restraining order. He denied wrongdoing but reported himself to the General Medical Council.

At the Medical Practitioners Tribunal, Manchester, the doctor faced being struck off but he was suspended from medical practice and will be able to return to work following a review. Raja had earlier blamed his wife for the incident saying she had mental health issues and claiming he had ‘permission’ from her to stay out late.

In making the determination tribunal chairman Mrs Emma Boothroyd said: ‘There is a lack of evidence to demonstrate that Dr Raja has insight into his offending behaviour. He continues to deny that he assaulted the family member or damaged the mobile phone.

‘On the contrary, he has made unsupported allegations about the family member. He has provided the Tribunal with no evidence of any reflection into his behaviour leading to his conviction, or of the impact his behaviour has on public confidence in him as a doctor and upon the profession as a whole. The Tribunal considered his attitude to be self-serving.’ 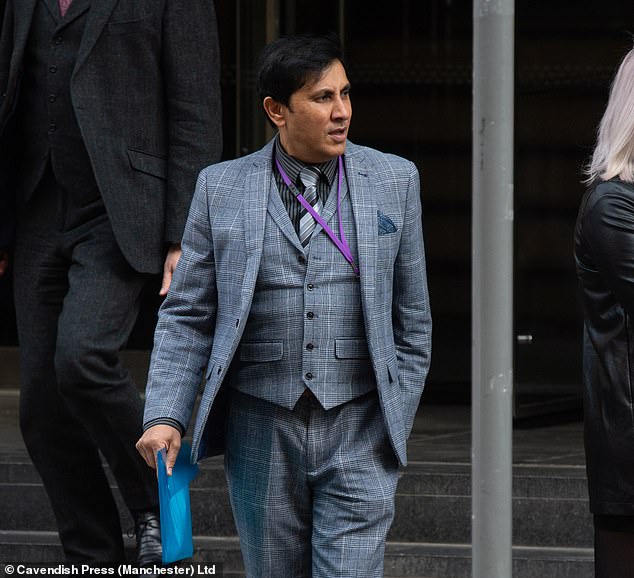 But she added: ‘Although the convictions are serious they are not fundamentally incompatible with continued registration. The behaviour is capable of remedy and with sufficient remediation and insight, the risk of repetition could be significantly reduced.

‘Dr Raja is beginning to appreciate the concerns arising from his conviction and he proposed to take action to remediate those concerns in the future..’

The incident occurred on September 8 2018 when Dr Raja arrived back at the family home at 6am.

Emma Gilsenan lawyer for the General Medical Council said: ‘Dr Raja returned home late and became embroiled in an argument with his wife. He followed her downstairs and assaulted her by striking her to the head on two occasions.

‘Dr Raja is alleged to have smashed a phone into the wall causing damage to the wall and smashed the phone onto the floor causing it to break.

It is also alleged he picked up a plastic sweeping brush and swung it around aggressively and caused an injury to his wife. 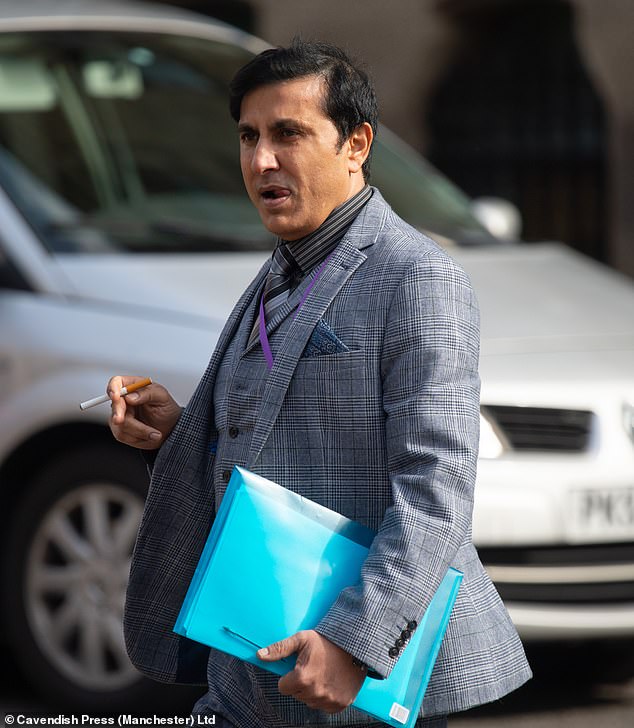 ‘There was a picture of her thumb and the swelling caused to it but he denied hitting her. Dr Raja has sought to minimise his actions dramatically and paints a different less serious picture to the tribunal than made out by the evidence and conviction.

‘He’s made unsupported allegations about his wife at the time in relation to her mental state and her aggressive behaviour and propensity to violence and her character and credibility. There has not been an appeal hearing in any crown court.

‘Dr Raja’s conduct is also compounded by his failing to accept his behaviour to demonstrate insight or remorse into his behaviour. He demonstrated a patent lack of insight into the impact of his actions.

‘The way in which he assaults his wife by hitting her to the face behind the hair and the use of a weapon is conduct unbefitting of a medical practitioner.’

The hearing was told Raja was ordered to complete a 12 month community order, 80 hours unpaid work and pay £500 compensation plus a £85 surcharge. he has since completed the penalty.

He told the panel: ‘It’s one of those Friday evenings which had been agreed between me and my wife. I working all week and look forward to that Friday evening and meet all my friends. We all wanted to have some drinks and I got permission from home off my wife. She understood that if I had too much to drink I would stay there till I got sober and then I would drive back home. 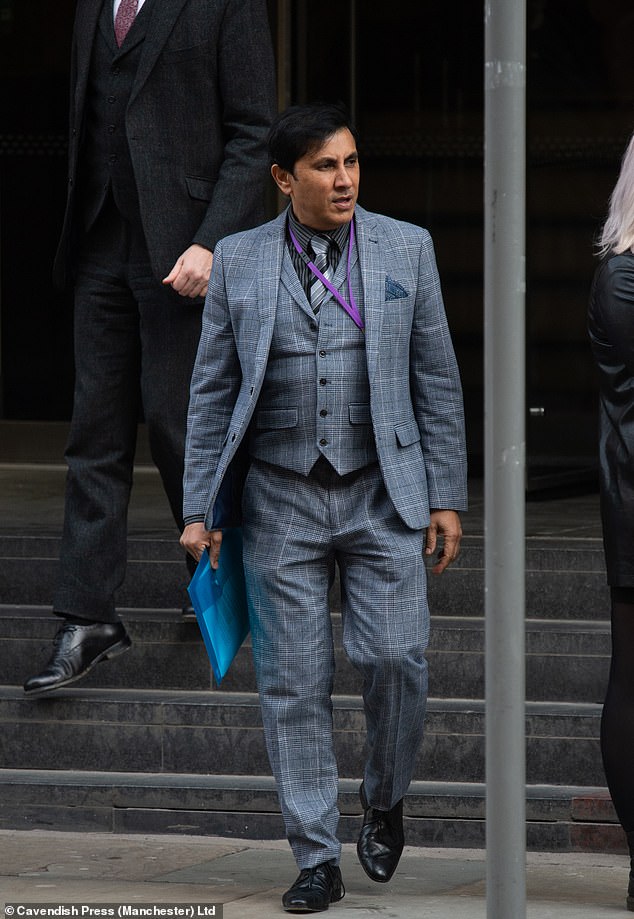 A probation report compiled about Raja said he posed a ‘medium risk of harm within intimate relationships.’

‘She never objected before to this there had been some occasions when I had to stay there and then I got sober and felt okay.’

He added: ‘When I came back I actually thought it was about 4.30am and my first priority was to get some sleep as I had a clinic starting.

‘I can’t remember how long I had been in bed for when I felt pain and discomfort and I found my wife trying to pull my fingers back to put my thumb on my phone. I was half asleep and she was shouting: ‘turn on your phone.’

‘She asked me about one of my friends who was there that night and she was angry and pushing and punching me and saying: ‘Who’s this?

‘It’s happened before many times and she would get angry but realise the next morning and life goes on. But she was talking to someone and came back in anger and punched me on the back and mentioned the name of a lady I knew and have known for two years. She’s my friend and she’s actually married to a female girlfriend and lives happily.

‘She mentioned her and I said: ‘okay I will call her’ and then my wife went downstairs. On my mind, were two things – I want to go to sleep and secondly I want to have my phone next to me but she’s taken my phone. At that stage, I heard some kind of bang or smash went downstairs and saw there was on the floor a mess of plates and cups.

‘She had a broom and was shouting and was kind of red. She would break things as she normally does when she’s angry a lot and she was angry about me coming in late which has happened before. I went back to my bed and she said she says: ‘No, no I’m calling the police.

‘I started putting my clothes back on and she went down and I went downstairs and the police arrived and took me to the police station.’

‘I did appeal against the conviction. It’s very stressful having never ever been accused of anything. Nobody believed me and nobody seemed to mention the plates and cups that were broken when I came downstairs. ‘She’s smashed the plates and cups and everything.

‘I can’t live with this thing and that I have been accused of something which I have not done.’

A probation report compiled about Raja said he posed a ‘medium risk of harm within intimate relationships.’ The report added: ‘Due to his denial of both his offence and the risk factors highlighted by the victim, it is necessary to complete one to one work to aid responsibility taking and personal insight. If Mr Raja is able to address the underlying issues at hand, his risk of harm could be reduced.’