This is the hilarious moment a dozing tot suddenly snaps awake when his aunt reveals she wants another baby.

Madison Wallace filmed herself as her nephew lay on her chest, and whispered to the camera: ‘I want another baby’.

Footage, filmed in the US, shows the slumbering infant suddenly lift his head and stare at his aunt, apparently outraged. 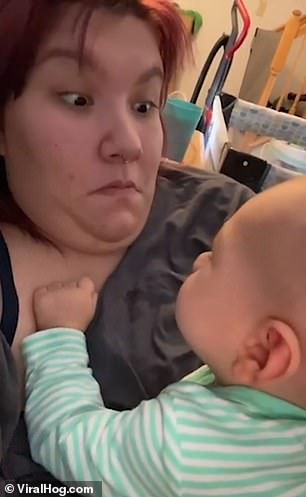 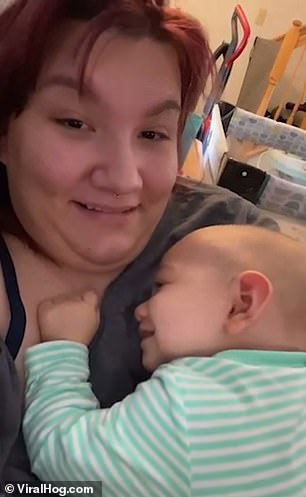 Madison Wallace filmed herself as the child lay on her chest, and whispered to the camera: ‘I want another baby’ before her nephew looked up in outrage

The mother-of-two was spending time with her nephew when she said that ‘baby fever kicked in’.

But the little one didn’t seem very pleased that there might be a new addition to the family and gave her a very serious look in the amusing clip.

His aunt looked surprised before whispering: ‘I’m sorry’, which seemed to please the youngster.

He lay back down against her chest with a big smile on his face.

Madison said: ‘I was having a normal day spending time with my nephew, when baby fever kicked in!

‘I just wanted to make a funny video to send my significant other saying that I had baby fever and want another baby.

The footage, posted to TikTok on November 30, has since gone viral with more than 75.7K views and 18.2K likes.

One commented: ‘Baby said “take it back right now”.’

Another said: ‘That was cute, reaction like “don’t you dare”.’