A Channel Seven reporter stopped his live cross and rushed into the surf to rescue a 10-year-old boy who was struggling to stay afloat in the waves on the Gold Coast.

Paul Burt noticed the child was struggling during his cross on Thursday evening and was then seen charging into the choppy water at Surfers Paradise to rescue him.

He was later seen helping other beachgoers carry the boy out of the surf. 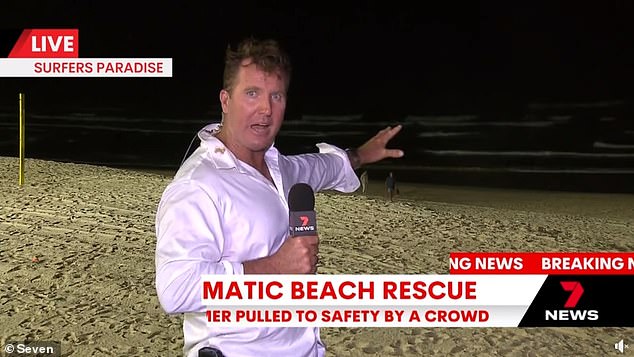 ‘A group of family from Pakistan jumped in, they got sucked out,’ Burt later told the network.

‘(He) got dragged out into this fierce gutter, and of course into this rip …. About four or five of us jumped in and basically pulled him back to the beach.

Footage shows Burt bounding into the water before tearing off his shirt to help keep the boy above the water. 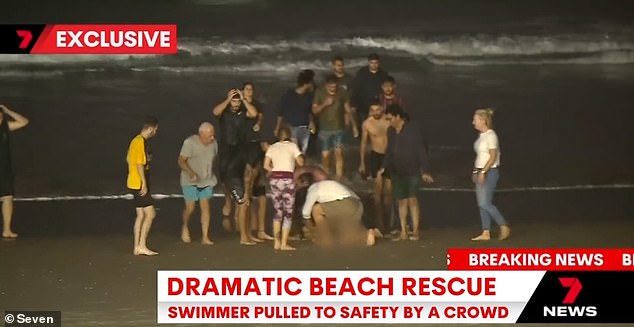 Burt, centre (at front) is seen helping the Pakistani family out of the water

It took him nearly ten minutes to find the boy while other swimmers desperately tried to locate him amid the rough surf.

The reporter said there was ‘no doubt’ the ten-year-old would have swallowed a lot of water.

Burt said he was doing a live report on the dangers of beach gutters that lure unsuspecting swimmers into life-threatening rips at the time of the incident.

‘His dad was screaming and crying for his son,’ Burt told The Courier Mail.

‘We started walking out of the water and then we heard someone say, there he is, there he is.’

His cameraman Geoff Bowden said he feared both the child and Burt had drowned. 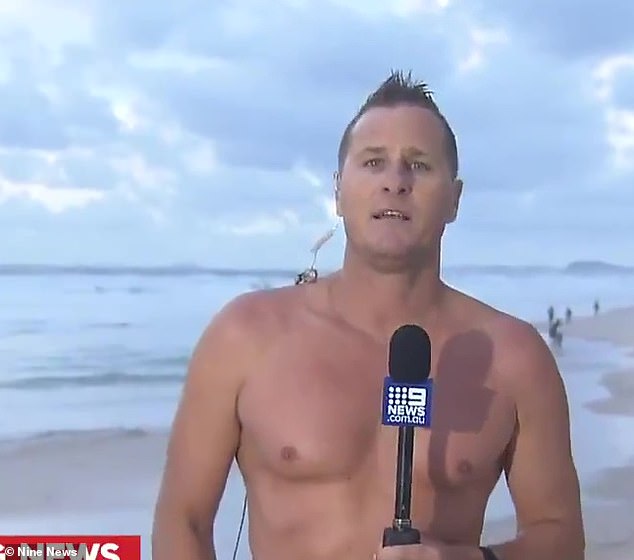 Last February, Channel Nine broadcaster Luke Bradnam raced into the ocean at Narrowneck beach on the Gold Coast to pull the body of a swimmer out.

British gym manager Jake Jacobs, 32, had tragically drowned after entering the water the night before.

‘We’d seen this boogie board rider motioning to us from the water and he looked like he was in distress,’ Bradnam told Daily Mail Australia at the time.

‘I felt like I had to do something because there didn’t look like there was anyone else around who’d be much good.

‘I got out there and sure enough, there’s a body face down in the water.

‘The body boarder was looking like he was in shock and I’ve never experienced anything like that. I’ve never seen a dead body before.’