Drug smugglers heading for British shores could be hunted down by remote-control Royal Navy drone boats.

The Navy and Marines are testing a Mad Fox autonomous vehicle with the Border Force to see how it could be best deployed.

Its most likely use is that on-board cameras will identify drug smugglers and then, on approaching the criminals, the drone will launch a net to clog the propellers of their boat.

The unmanned drone, measuring 41ft and with a maximum speed of 40-plus knots or about 45mph, will be operated from onshore or from a bigger inflatable vessel or ship. 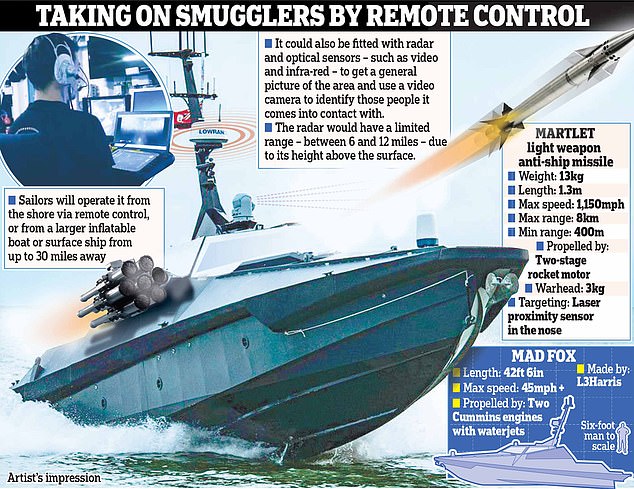 Navy sources said it could also be armed with surface-to-surface missiles to attack incoming fast boats deployed in choke points, such as the Strait of Hormuz in the Middle East.

Another option is using on-board radar and cameras to search for migrants crossing the Channel.

Captain Chris Ling, who is in charge of bringing autonomous vehicles into the Navy, said: ‘They can pretty much do whatever, that’s why it is really exciting to get these.’

A Navy source added: ‘The world is your oyster when it comes to what equipment you can put on them. You are only limited by your imagination.’ 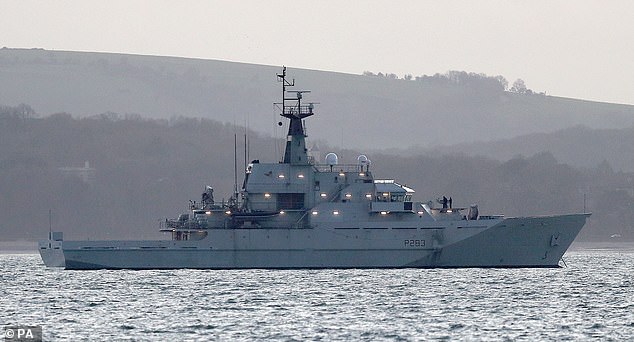 The Navy and Marines are testing a Mad Fox autonomous vehicle with the Border Force to see how it could be best deployed. Pictured: File photo

The joint Royal Navy and Border Force trial was to see how well the drones could operate in congested waterways.

The source said: ‘Putting them in the Dover Strait would be like putting a driverless car in a London rush hour, with hordes of tourists randomly crossing the roads.’

The Navy has ordered one Mad Fox, short for Maritime Autonomous Demonstrator.

It can operate about 20 to 30 miles from its control centre, but the Navy is not revealing how long it can remain at sea for security reasons.

Explaining the potential drug-busting role, the source said: ‘If you can get the net in front of a fast drug smuggling boat doing 40 knots and bring it down to ten knots it makes it a lot easier for our teams to get on board.’

The Navy and Marines have intercepted millions of pounds worth of drugs this year during counter-narcotic operations in the Gulf and the Caribbean.

A Royal Navy spokesman said: ‘No decision on its procurement or future use have been made.’