This is the bizarre moment a drunk man threw himself and his motorbike at a taxi in an insurance scam.

CCTV footage shows a taxi grinding to a halt as a man perches on his motorbike in front in Shanghai, China.

He then pushes his bike to hit the taxi in front and sends the motor vehicle falling sideways on to the road. 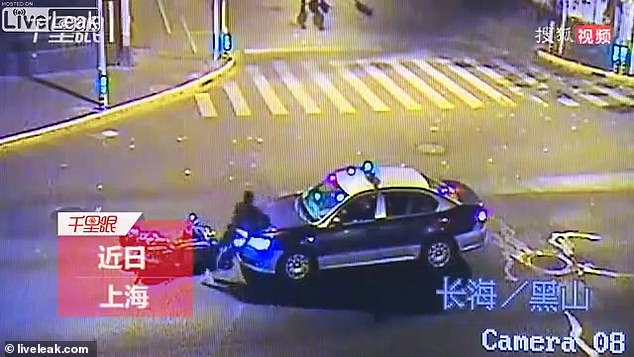 A drunk man threw himself on to the bonnet of a parked taxi and hit his motorbike into the front in a desperate bid to make an insurance claim in Shanghai, China

The man, who topples over with the bike, then casually gets up and launches himself onto the car’s bonnet.

He pauses on the taxi’s side before dramatically falling to the ground.

In a desperate bid to make his scam authentic, he quickly rolls over and stands up to try and figure out another way to a fabricate an accident. 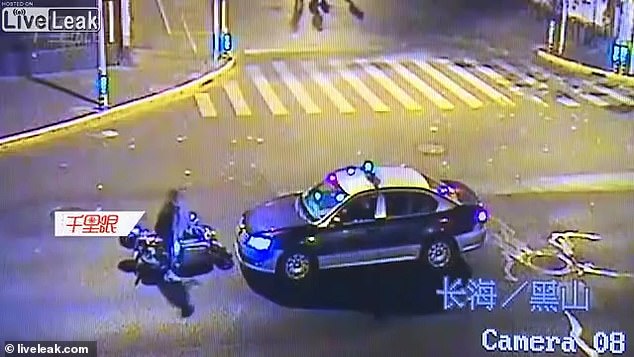 His bike topples on to the ground and unbalances him, in the CCTV footage. He then casually gets up and throws himself at the car

Another figure then appears by the side of the taxi and the fallen man serves him a few punches.

The two people wrestle and fight next to the car, illuminated by street lights, as the initial man then tumbles to the ground on purpose.

He tries to then hold the other person in a headlock. 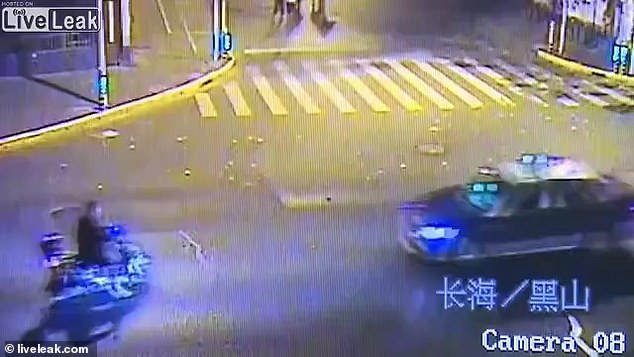 The man watches the car approaching before his plan unfolds. Around 469,000 fraudulent and dishonest claims were detected by insurers in 2018, according to The Association of British Insurers

Seconds later, a third person arrives who is given a beating against one of the back doors while another watches on the bonnet as though it is a staged attack.

Fraudsters deliberately causing accidents as part of ‘crash for cash’ scams are thought to rake in an estimated £340million-a-year.

Around 469,000 fraudulent and dishonest claims were detected by insurers in 2018, according to The Association of British Insurers.