E-gate: The inner Melbourne suburb that could have been

Anthony McKee looks out over a severe vista from the elevated platform at North Melbourne station. Between where he stands and the shuttered Docklands Observation Wheel in the distance are belts and belts of train tracks and disused rail yards.

Not so long ago, there were grand plans for this place: up to 10,000 people would live here, in eco-friendly homes on one of the “best development sites in Melbourne”, with bucket loads of green space, a sprawling urban forest and sporting fields. 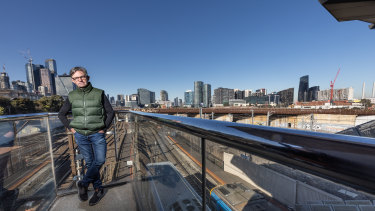 Anthony Mckee set up the Western Connection community group several years ago to propose some ideas on the E-Gate site to government.Credit:Jason South

“Under our plan you’d cover the top of the train lines all the way down and build a bridge to go across the top of Footscray Road,” says McKee, pointing out across the area known as E-Gate, 20 hectares of largely disused, publicly owned rail land on the fringe of the CBD.

“Then [on top] you’d put in a park. [We were] proposing something the size of Flagstaff gardens. You would literally walk off the edge here [the North Melbourne station raised platform] and you would be on grass.”

But a 20-year blueprint published last week by the City of Melbourne that outlined grand visions for the renewal of former industrial sites around Melbourne left E-Gate largely off the list.

Places such as the fledgling suburbs of Arden and Macaulay, nestled between North Melbourne and Kensington, and Fishermans Bend and Lorimer, south of the Yarra, will be radically transformed over the next two decades to house more than 25,000 people and become, as Deputy Mayor Nicholas Reece described, “the next Fitzroy or Collingwood”.

Notably absent, though, within the council’s Municipal Planning Strategy and City Spatial Plan, were any concrete plans for E-Gate.

The plan envisages 1600 people working in the area by 2040 but no residents at all – a surprising admission by the council for a place that has been flagged since 2009 by successive Labor and Coalition state governments as an ideal location for major residential and commercial redevelopment.

Back in 2009, the current Victorian Treasurer Tim Pallas, who was then major projects minister, said the site was “one of the last remaining large brownfield areas in inner Melbourne that is currently without a long-term strategic plan”.

The Napthine government later moved to sell the land, launching an expressions-of-interest campaign just days before it lost the 2014 state election.

At least four major developers – Lend Lease, MAB Corporation, Walker Corporation and Cbus – were considered in the early days of the Andrews government to build the project. Beautiful concept renders of green neighbourhoods were published in newspaper articles touting “one of the best development sites in Melbourne”.

“But then things went quiet,” says McKee, who formed a community group named Western Connection, which included urban planners and a range of professionals, and pushed for a major green-space project in the new suburb.

“And then came the announcement that Transurban were going to use the site for the West Gate Tunnel Project.”

Critics say the sole reason for the loss of E-Gate’s potential was the Andrews government’s decision to allow Transurban to build two large tollway extensions through the site, as part of the $5.5 billion West Gate Tunnel. 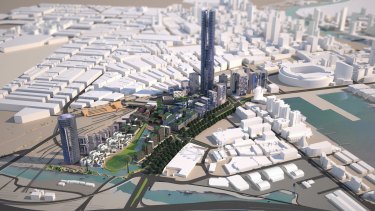 Melbourne City Council was one of the loudest dissenting voices on the plan, claiming in submissions to the government at the time that the flyover would ruin “a once-in-a-generational opportunity” for E-Gate, and that proposal was “inconsistent with policy and practice of the last 30 years, in an area of Melbourne where we should be specifically planning for the next 30 years”.

An inquiry and advisory committee, convened in 2017 to hear submissions on the West Gate Tunnel, recommended to then-planning minister Richard Wynne that it considered the impact on E-Gate as “suboptimal” and there would be “a missed opportunity” if the design wasn’t remedied.

Despite these protestations, including from groups such as Western Connection which proposed an alternative road set-up, the flyovers went ahead. The only concession was to lower the road by about 10 metres, to 2.6 metres, for much of the road, but it will still tower to 11 metres at some points.

Urban planner and associate professor of RMIT’s Centre for Urban Research, Andrew Butt, who was also part of the Western Connection group as an expert and a West Melbourne local, said the decision to allow the tollway operator to cut through the site “sacrificed” it. 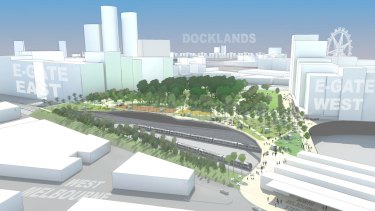 “It was an exercise in providing tolling for Transurban and not necessarily transport solutions,” Butt says.

Docklands Chamber of Commerce chief executive Shane Wylie said E-Gate would have been a game changer for the harbourside suburb. By connecting Docklands to West and North Melbourne, E-Gate could have ended the precinct’s isolation.

“Retailers, traders and residents were all extremely excited,” he says. “It’s disappointing for the chamber and Docklands businesses to see such an exciting proposal disappear.” 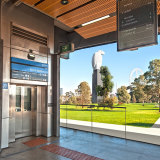 Wylie says the West Gate Tunnel’s intrusion into the site is now a major barrier to the planned development becoming a reality. The dampening of the appetite for major new developments caused by the pandemic leaves Wylie with little hope that the development of E-gate will get off the ground.

“The barriers that are there now are too great and the rewards for such a proposal are not what they were,” he says.

When or if E-Gate will ever be realised as a proper suburb will be a decision for the state government of the day. An Andrews government spokeswoman said it would reconsider E-Gate for development when the West Gate Tunnel is completed and when the site is no longer being used as a rail stabling yard and maintenance site.

She said significant changes were made to project design to get the “full potential” out of the E-Gate development site, including lowering the Wurundjeri Way extension to allow direct access to the site.

“The Wurundjeri Way extension … will create a CBD bypass, making it easier to travel between the inner north, central city and the western suburbs,” she said. 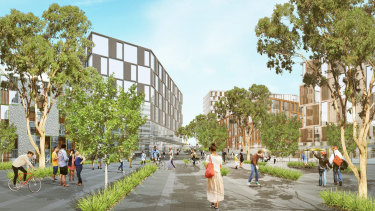 An artist’s impression, released by the Napthine government in late 2014, of what the E-Gate site was meant to look like.Credit:Victorian Government

“It will take traffic off Spencer and King Streets and use less than 1.5 hectares of the 20-hectare E-Gate site on its northern and eastern edges, leaving the vast majority available for future development.”

But Rohan Leppert, a Greens-aligned councillor with the City of Melbourne who was active in the council’s failed fightback against the plan, said the toll road ramps had reduced the idea of E-Gate to a shadow of its former self.

“Raised freeways are a recipe for urban blight, and E-Gate will be surrounded by big and hostile arterials. Knitting E-Gate together with West Melbourne and Docklands will need a lattice of bridges, and that isn’t cheap,” he said.

“But if those challenges can be overcome, E-Gate has the potential to be a world-class urban-renewal precinct, with sustainable buildings and the reintroduction of trees and greenery. That’s what our new Municipal Planning Strategy strives for, despite the ridiculous folly that is the West Gate Tunnel – where ‘tunnel’ means ‘freeway on stilts’.”

Anthony McKee, meanwhile, says he hasn’t given up entirely on his hopes of one day seeing some remnant of his group’s original vision for E-Gate come to life.

Although it would require building over both the rail lines and now over the new toll roads, he says there are examples of this happening already on different sections of Wurundjeri Way in Melbourne and other Australian cities.

“There’s plenty of traffic in Sydney that goes underneath tunnels,” he said. “And above ground, you wouldn’t know anything was there.”