The Washington Football Team claims that it offered medical assistance to fans who fell over a railing at FedEx Field on Sunday as it collapsed near Philadelphia Eagles quarterback Jalen Hurts.

Some of those fans claim otherwise.

In interviews with the Philadelphia Inquirer and ESPN on Monday, multiple Eagles fans said that they were injured during the incident and that the team did not offer onsite medical attention.

"They didn't ask if anyone was hurt, and they sure as hell didn't ask if anybody needed medical attention," 26-year-old Andrew Collins of Brooklawn, New Jersey told ESPN's Tim McManus. "The only thing the staff said to us was to get the eff off the field."

Another 26-year-old fan named Mike Naimoli from from Sicklerville, New Jersey told ESPN that he was told by staff: "Everybody get the eff off the field." He added: "[they] quickly grabbed us away from Jalen and shooed us up into the stands."

Naimoli and Collins are friends. Both claim injuries to themselves and others. Both told similar stories to the Inquirer. 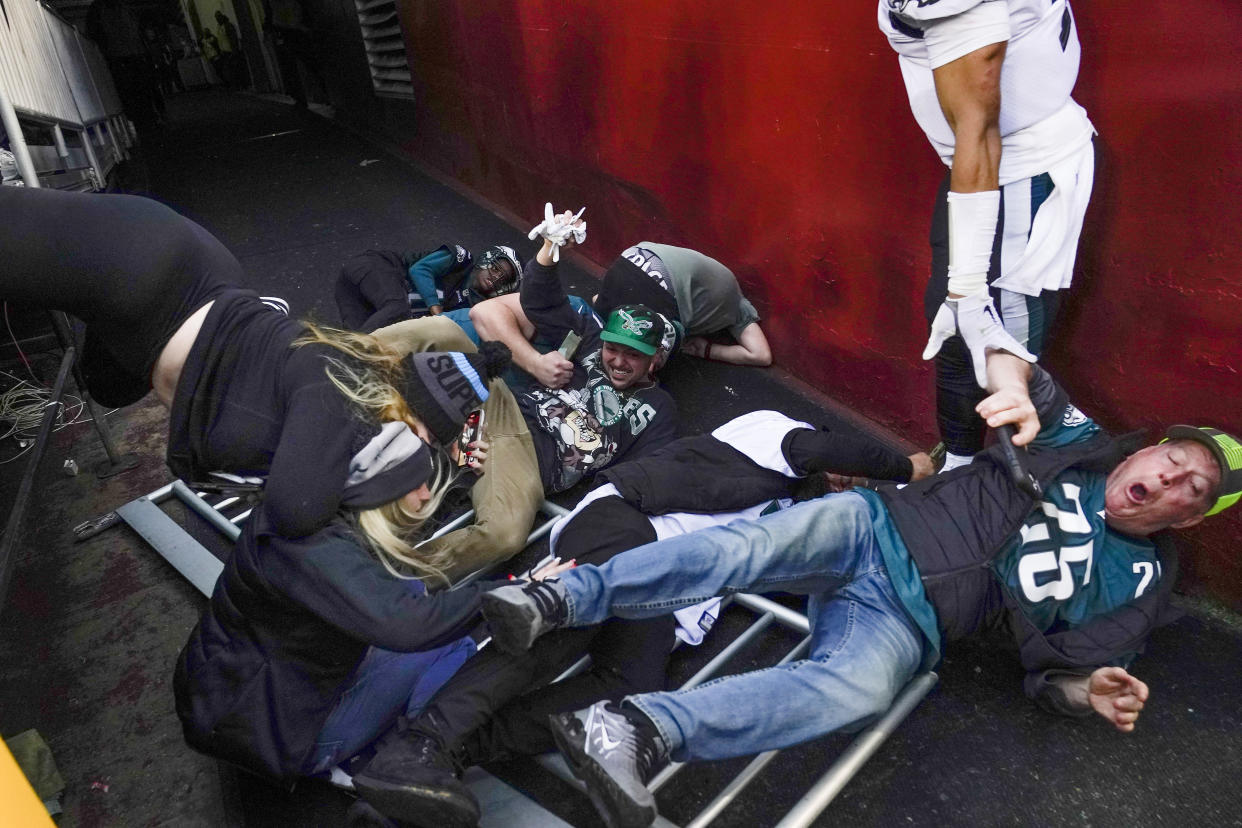 "To our knowledge, everyone involved was offered onsite medical evaluation and left the stadium of their own accord," the statement reads. "We're very glad no one appears to have been seriously injured. The safety of our fans and guests is of the utmost importance and we are looking into what occurred."

A source told ESPN that "Prince George's County EMS personnel were on the scene within five minutes and began treating those who needed medical attention," according to McManus. That source added that staff weren't aware of anyone else needing medical attention in the aftermath of the collapse.

In case you missed it, here's video of the incident:

#Eagles QB Jalen Hurts was sacked only once during today’s game. Almost had a second on his way to the locker room. pic.twitter.com/WwBE5pXaxO

Here's another angle from the stands:

This view is crazy… I would've stayed on the ground until my lawyer arrived… 🤕💰
pic.twitter.com/cVU0yPmG3z

According to ESPN, Naimoli is the fan wearing the green No. 1 Hurts jersey getting a selfie with the Eagles quarterback. Naimoli told the Inquirer that his initial instinct was to get up and take the selfie. He said that he felt numbness at the time of the collapse.

“Obviously, there was a bunch of people on the barricades,” Naimoli told the Inquirer. “That was applying pressure and made my fingers go numb for a second and turn purple instantly.”

He claims he later experienced pain in his hand and neck on the drive home and that he spent the night at New Jersey's Inspira Medical Center. He told the Inquirer he didn't suffer broken bones and was advised to get an MRI if the pain persists. He told ESPN he was diagnosed with a cervical strain, a head injury and elbow and knee contusions.

A Washington Football Team spokesperson told the Inquirer and ESPN that the section that collapsed was designated for wheelchair access under the Americans with Disabilities Act — that the railing was attached to a wheelchair ramp instead of anchored in concrete and not intended to be load-bearing.

Naimoli told ESPN there was no signage indicating that access was restricted and that they were granted access by a security staffer.

"The security guard at the bottom, we [asked] him, 'Can we go over there?' And he was like, 'Yeah,'" Naimoli said. "If Washington Football Team wants to come out and say that the area is restricted, there was no documentation of that at all.

"The one security guard that was right in front of that area swept us in there and was like, 'OK, go ahead over to the tunnel.'"

NFL spokesman Brian McCarthy addressed the incident in a statement to ESPN:

"We are reviewing the matter with the club to understand what happened and to ensure it does not happen again."