The damning emails that prove Matt Hancock misled the public about his friend’s Covid contract: He repeatedly insisted he had ‘nothing to do with it’… but these messages reveal the truth

Matt Hancock is facing fresh scrutiny after The Mail on Sunday obtained bombshell emails contradicting his insistence that he did not help a friend win a lucrative coronavirus contract.

The messages, obtained after a Freedom of Information battle, reveal the ex-Health Secretary personally referred a plea for business by former pub landlord Alex Bourne to a senior civil servant in the Department of Health.

Within weeks, Mr Bourne had secured a meeting with Boris Johnson and a reported £30 million deal to supply test tubes for NHS Covid tests. 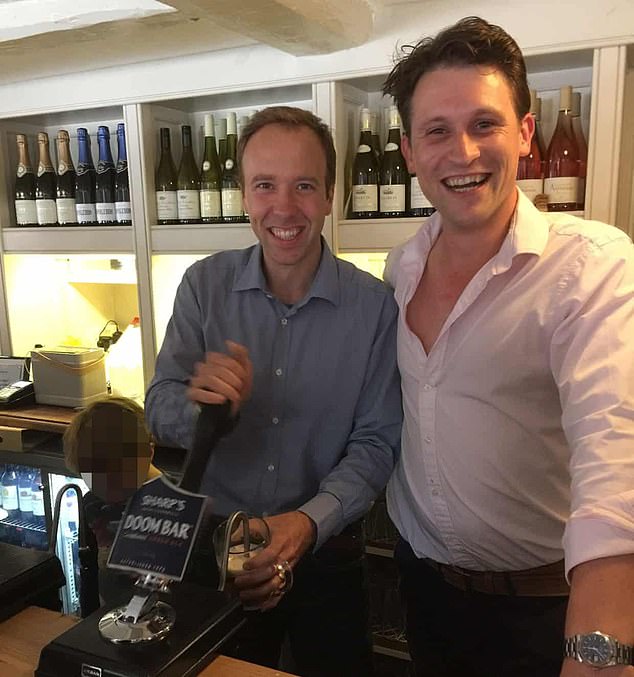 ‘The charge sheet against Matt Hancock grows by the hour,’ he said.

‘These damning emails reveal the beleaguered Health Secretary misled the public over his help for his pub landlord friend winning lucrative public contracts.’

The Department of Health and Social Care battled for months to keep email exchanges between Matt Hancock and his friend a secret – and only caved in when threatened with court action.

The Mail on Sunday submitted a request for information on February 23, asking for copies of emails and WhatsApp messages exchanged by the two men between March and December 2020, as well as the transcripts of any relevant telephone conversations. The DHSC failed to reply to that or a subsequent request for an internal review.

The MoS then complained to Information Commissioner Elizabeth Denham, who – after reminding officials of their responsibilities under the Freedom of Information Act – issued a Decision Notice on June 15 in which she stated that a failure to respond was a breach of the law.

She warned that a failure to respond within 35 calendar days could lead to High Court action for contempt of court. Three days later, the DHSC capitulated.

However, while it supplied Alex Bourne’s communications to the Health Secretary, it ignored the part of the FoI request which asked for those written by Mr Hancock.

Officials also redacted swathes of the exchanges and said it could not find any details of phone conversations alluded to in the documents, and that Mr Hancock had no recollection of them.

Mr Bourne, whose firm Hinpack Limited manufactured cups and cartons for the catering industry before the pandemic struck, has been friends with Mr Hancock for many years.

The Minister was a regular visitor to the Cock Inn pub Mr Bourne used to run, which is a few hundred yards from the MP’s former constituency home in Suffolk.

While it is known the pair communicated last year, the extent of that contact and the content of their exchanges has until now remained confidential.

In his first message sent on March 30, 2020, Mr Bourne focused on ‘Surgical Mask Manufacturing’ – despite having no experience of supplying medical equipment.

‘Dear Matt. Good to hear you again and glad you are full of beans!’ he wrote. ‘You and your department are doing a fine job and we’re all very grateful to you for steering us through these difficult times with such a level head.’

He then outlined how his firm might be able to assist the department: ‘By way of introduction, Hinpack is a company I own and run and we specialise in food and drink packaging made from biodegradable feedstock.

We manufacture as well as distribute so understand simple manufacturing processes and distribution such as those involved in making surgical face masks.’

He added: ‘I’m not looking to make my fortune from this and will work at cost supplying this product to the NHS and allied government professions.

‘If you are stuck for PPE and supply is not coping – we can make this happen very quickly.’

Three hours later, Mr Hancock referred the message to Jonathan Marron, the then director general of community and social care at the Department of Health, writing: ‘This one is for domestic production.’

The messages allude to other contacts between the two men, including telephone conversations.

On June 15, 2020, Mr Bourne thanked his friend ‘for your time the other day’. They also reveal Mr Bourne switched from masks to testing.

On June 30, following further contact between them, he sent Mr Hancock a three-page message headed ‘Antigen Testing Problems/Solutions’ in which he complained about the ‘highly problematic’ procurement process he thought placed too much emphasis on what companies had done as opposed to what they could do in the future.

On August 25, Mr Bourne accepted an invitation to join Mr Hancock, the Prime Minister and other suppliers in a virtual Zoom session on ‘manufacturing support for increased testing’. 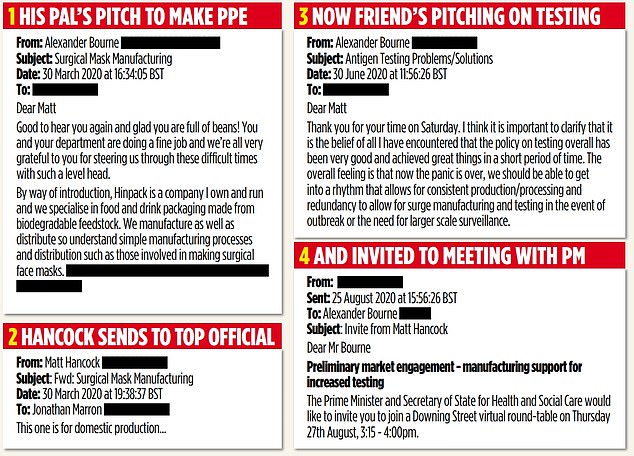 The messages, obtained after a Freedom of Information battle, reveal the ex-Health Secretary personally referred a plea for business by former pub landlord Alex Bourne to a senior civil servant in the Department of Health

Mr Hancock was also asked about the deal at a No 10 coronavirus press conference in December, when he replied: ‘I had absolutely nothing to do with that contract.’

Quizzed on ITV’s Good Morning Britain in February, Mr Hancock said: ‘As I’ve repeatedly said, I didn’t have anything to do with that contract… All of this was done properly.’

The weasel words that hid the reality

‘A constituent of mine came forward and approached the Government and went through the normal channels… I had nothing to do with this contract. I don’t have anything to do with the signing of individual contracts.’

‘I had absolutely nothing to do with that contract.’

‘As I have repeatedly said, I didn’t have anything to do with that contract. This has been looked into by the National Audit Office who confirmed that position.’

While it may be true that Mr Hancock had no involvement in awarding the contract, the emails demonstrate that there were a number of occasions when he communicated with Mr Bourne, who was his constituent, about this work.

In the documents released to the MoS, the Department of Health acknowledged that the communications referred to phone conversations, but insisted that it had no records of them and that Mr Hancock had no recollections of them.

Last night Mr Bourne stressed there had been no impropriety in securing his Covid contract. He said: ‘I don’t know him [Mr Hancock] well… This idea that I am chummy with him is not true.’

He said his firm had signed a contract with an approved NHS distributor rather than directly with the Government, and that the reported £30 million value of his deal was exaggerated.

Last night it was also claimed that Mr Hancock used a personal email account instead of an official Government address during the pandemic and therefore does not hold records of some decision-making, including negotiating contracts.

The disclosure came in the minutes of a meeting at the Department of Health in December where an official said Mr Hancock only dealt with his private office ‘via Gmail’ and that the ‘threshold’ for requesting access or information from it ‘would need to be substantial’.

Cabinet Office guidance says Ministers should use official email to ensure there is evidence of important decisions and scrutiny.

Sipping a drink in his local pub, Matt Hancock soon hit it off with the landlord Alex Bourne.

The Tory MP’s constituency home was a few hundred yards from the Cock Inn in Thurlow, West Suffolk.

Villagers noted how Mr Hancock warmed to Mr Bourne, 37, a former Welsh Guards captain, after he and his wife Rebecca acquired the freehold of the 17th Century coaching inn in 2016. 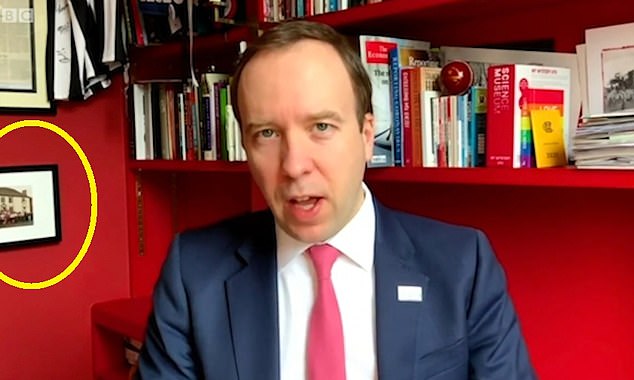 Mr Hancock’s fondness for the establishment even extended to displaying a photograph of it in his office at his home, its prominence easy to spot whenever the politician gave a TV interview during the pandemic lockdown

Mr Hancock’s fondness for the establishment even extended to displaying a photograph of it in his office at his home, its prominence easy to spot whenever the politician gave a TV interview during the pandemic lockdown.

It was quietly removed in February when there was renewed reporting about Mr Bourne securing a deal to supply coronavirus testing equipment.

‘If it’s all above board, why has the photo of Matt Hancock’s mate’s pub, the Cock Inn, been taken off the wall behind him?’ one viewer asked, although Mr Bourne has insisted there was no impropriety.

What it did, however, was underline the view held by locals that Mr Hancock became a ‘buddy’ of Mr Bourne after he took over the shuttered pub. 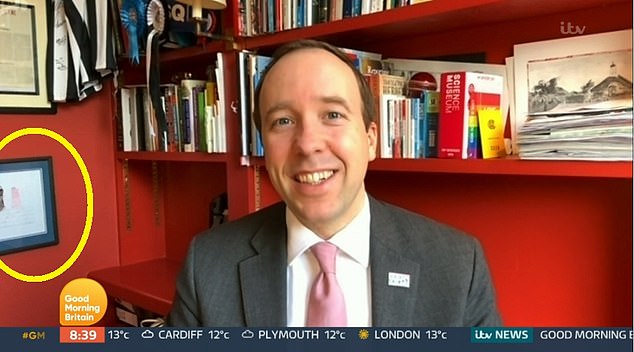 There had been fears that the inn might not reopen, prompting locals to launch a fundraising drive. The Bournes, who had a five-month-old son at the time of the purchase, saw press coverage of the campaign and eventually took on the venue.

Mr Hancock was happy to promote the fledgling business. In August 2016, he presided over the ribbon-cutting ceremony at the pub’s grand reopening after earlier issuing a statement in which he predicted that it would become ‘a focal point for the village’.

The then Culture Minister was paraded at the Cock Inn again in January 2017 when he opened its new shop.

Later that year, he gave the place his public backing by urging constituents to put forward nominations for the annual Parliamentary Pub Chef of the Year awards.

Constituents were left in little doubt where Mr Hancock’s own loyalties lay.

In his address to constituents, he included a picture of himself and Mr Bourne behind the bar at the Cock Inn and the accompanying endorsement: ‘Great food, the kind served by Alex Bourne at the Cock Inn at Thurlow, is fantastic when you find it.’

Despite moving out of the area in 2018, Mr Hancock has remained in contact with the retired Army officer – as the emails obtained by The Mail on Sunday testify.

Mr Bourne addressed all of his messages to ‘Matt’ and the exchanges suggest that the pair spoke by phone.

Mr Hancock was even available to chat at weekends.

Despite the recent disclosures, the men have sought to play down their contact with each other.

Last November, Mr Bourne’s lawyers said he had no ‘personal connection’ with Mr Hancock and the former publican insisted: ‘I’ve never once been to his house. He’s never been to mine. I’ve never once had a drink with him.’

The comment puzzled villagers in Thurlow, where Mr Bourne’s friend, Sukhvinder Dhat, recalled regularly seeing Mr Hancock in the pub and described the Minister and Mr Bourne as ‘friends’ and ‘buddies.’

According to locals in Thurlow, Mr Bourne has recently moved into a large property in nearby Hundon.