The environment regulator is hiring dozens of surveillance experts, intelligence analysts and forensic accountants to staff a special taskforce for cracking down on polluters and rogue operators in the waste industry.

The recruitment drive is part of a bid to boost the investigative capabilities of the Environment Protection Authority, which will be re-classified as a “law enforcement agency” under a legislation set to come into effect in mid-2021. 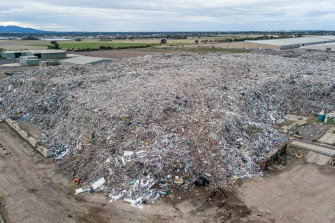 A former “recycling” business that was abandoned near Lara and will cost the state government $100 million to clean upCredit:Justin McManus

EPA officers will be able to conduct covert surveillance, obtain search warrants and stage unannounced raids on suspects, all of which marks a significant expansion in the existing powers of the regulator. The EPA will be able to plant audio and video "bugs" but not intercept telephone calls.

The EPA will shortly begin advertising positions for more than 70 officers to join the its Waste Crime Prevention Inspectorate, which was established earlier this year following a series of major pollution incidents and high-profile regulatory blunders.

The jobs will be open to any applicant but the EPA is hoping to attract experienced current and former law enforcement and national security personnel.

Among those targeted for recruitment will be forensic accountants, who will be used to track down the assets of offenders and combat “phoenix activity”, where industry players start new businesses after allowing companies to go into external administration leaving behind polluted sites and large debts. 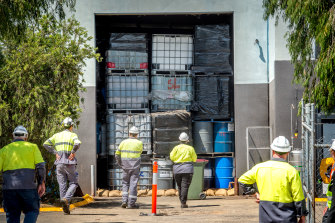 One of the stockpiles of toxic waste found in a warehouse in Epping.Credit:Justin McManus

The Andrews government is already being forced to spend hundreds of millions of dollars to clean up properties that have been abandoned by rogue waste industry operators, including $100 million for a former “recycling” centre in Lara and $56 million for 13 sites stockpiled with toxic waste in the city’s northern suburbs.

Taxpayers are also footing a huge bill to clean up the site of the West Footscray industrial fire in August 2018 and a massive subterranean chemical dump near the South Australian border, both of which have been allegedly linked to the same organised criminal syndicate.

Environment Minister Lily D’Ambrosio said the hiring spree was part of a $71 million funding boost announced in February targeting illegal stockpiling and dumping in the waste and recycling industries.

“By establishing the Waste Crime Prevention Inspectorate, recruiting 70 specialised staff, and strengthening environment protection powers, the EPA will be better equipped to stop waste crime before it happens.

“This means we can save significant costs in the clean up and make sure the environment and community are protected.

The powerful new EPA laws were meant to come into effect in July 2020 but were delayed for a year due to the COVID-19 pandemic.

Under the current system, the EPA’s ability to enter a property where a suspected environmental offence has been committed is heavily restricted – obtaining access usually involves providing advance notice and seeking the consent of land owners or occupiers. While the EPA can enter a premises to conduct an inspection if it is open, the agency has no right to force entry.

In the case of the subterranean dump in Victoria’s hinterland, EPA officers required the permission of the landowner – the person suspected of creating the illegal toxic dump – to remove a padlock on the front gate before entering.

The 70 new hires is the largest one-time recruitment drive in the EPA’s history, according to the state government. EPA staff numbers have nearly doubled in recent years, after being slashed during a deregulation push a decade ago.