Experts warn infections must drop to 1,000 before lockdown is lifted

Covid infections must fall by another 95% to 1,000 a day before lockdown is lifted, says the NHS: Hospitals chief writes to Boris urging him to wait before easing restrictions after SAGE warned of FOURTH wave causing more than 1,000 deaths a day

Boris Johnson must wait until there are fewer than 1,000 Covid infections a day before lifting lockdown, NHS bosses and scientists have warned.

Chris Hopson, chief executive of NHS Providers, is set to write to the Prime Minister and urge him not to lift the restrictions yet or face another increase of infections.

Mr Hopson said in the Sunday Times: “We have crested the peak but we’re only just beginning the descent. 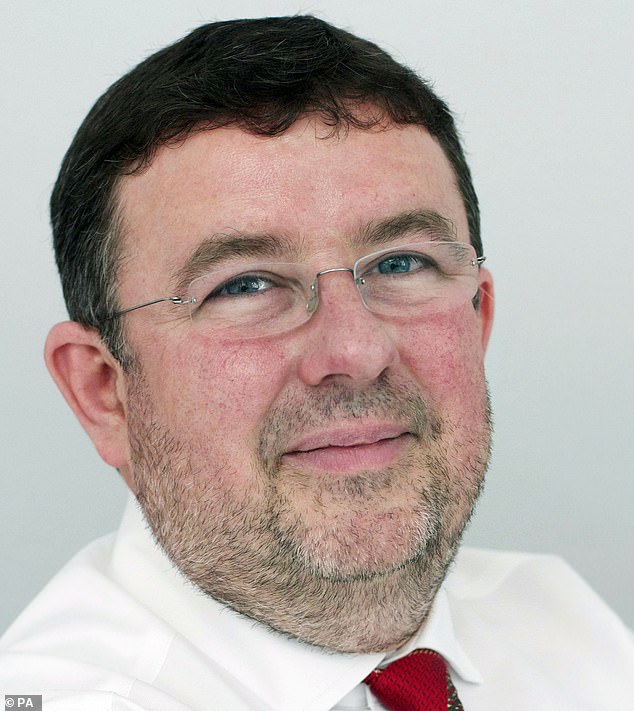 Chris Hopson, chief executive of NHS Providers, says the national lockdown should not be lifted until cases are below 1,000 a day

‘We’re still at a dangerously high altitude where the NHS is under great pressure and the thing we know is the descent is going to be much slower because people are taking longer to recover.

‘It’s going to take months, not days and weeks.’

Yesterday the UK has recorded 18,262 new coronavirus cases – down a fifth in just one week.

In a triumphant sign that the UK’s third national lockdown has slowed the spread of a highly-infectious Covid-19 variant, today’s daily case total is down 21.5 per cent on the 23,275 seen last Saturday.

Britain’s daily death toll has also plunged – with 828 fatalities recorded today. The figure is 31 per cent lower than the 1,200 seen on this day last week.

It marks the second Saturday in a row where deaths have dropped week-on-week.

In other good news, the total number of vaccines given in the UK have hit 11,975,267, data up to February 5 has revealed. 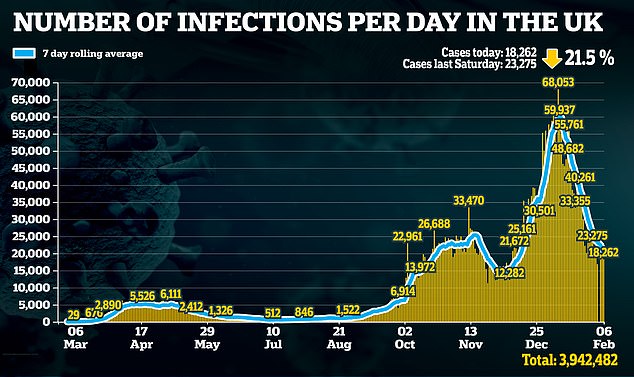 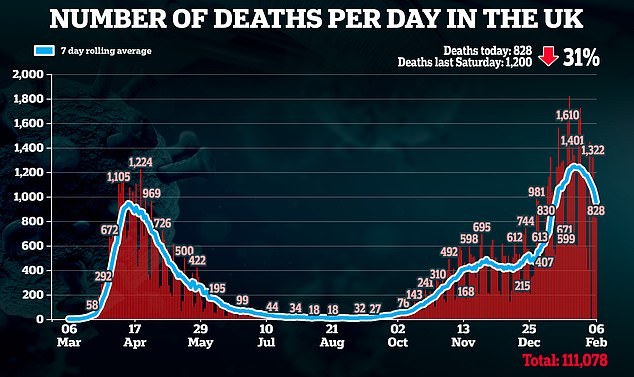 How will the country’s arrivals testing scheme work?

How many tests do people need to get?

1 – Passengers get their first mandatory test within 72-hours of their departing flight.

2 – On day two of self-isolation, a Covid PCR test will be administered. The tests will be posted to the traveller, it is understood.

3 – An optional test can be taken on the fifth day of at-home isolation. If it comes back negative, the traveller will no-longer have to self isolate.

4 – Another mandatory test will be carried out on day eight.

How are the mandatory tests enforced?

Fines will be issued for those who don’t get tested, The Times reports.

But it is not clear how the mandatory testing will be enforced – i.e. how officials will know if the tests have been taken or not.

It is also not clear how much the fines will be.

Will they be lateral flow or PCR tests?

The tests on day two and day eight will likely be PCR tests – which are more reliable than the quicker lateral flow ones.

The tests passengers flying into the UK must take can be lateral flow tests or PCR tests.

It is unclear what tests passengers can take on their optional day five test.

Who will pay for the tests?

The traveller will have to pay for the tests

It comes as a million people in the North West of England have been told to take a Covid test if they have a runny nose, as part of a clampdown on a mutated virus detected in the region.

A mobile testing unit has been set up at The White Hart pub in Fernhill Heath, near Worcester, for adults with no symptoms living within walking distance, a drive-through testing site will open and door-to-door testing will be rolled out.

Worcestershire County Council said: ‘Working in partnership with NHS Test and Trace, every person over the age of 18, living in the WR3 postcode and some WR9 postcodes, is strongly encouraged to take a Covid-19 test this week, even if they are not showing symptoms.’

Meanwhile, residents in the Liverpool city region, Preston and Lancashire have been urged by health bosses to get swabbed if they have even the slightest suspicion they are ill.

It comes after more than 40 cases of an altered strain of the original virus – which carries a mutation experts fear makes vaccines less potent – was spotted in the three areas.

Yesterday, it was revealed that passengers arriving in Britain from countries not on the Covid hotspot list could have to take up to four tests during their at-home isolation period, it emerged last night.

Earlier this week, the Government confirmed that all passengers from the 33 ‘red list’ countries would have to quarantine for ten days in a hotel from February 15.

And now, travellers arriving from countries not on the list – who have to isolate for ten days at home – face three mandatory Covid tests during their isolation.

A fourth test taken half-way through quarantine could allow travellers to be let out early.

All the tests must be paid for by the traveller. Those who fail to take the mandatory tests face fines.

It is unclear how much the tests will cost, but private patients can fork out around £150 on one currently.

This means it could cost up to £600 for all four tests.

The mandatory testing regime – to be announced next week by Health Secretary Matt Hancock – will come into force on February 15. 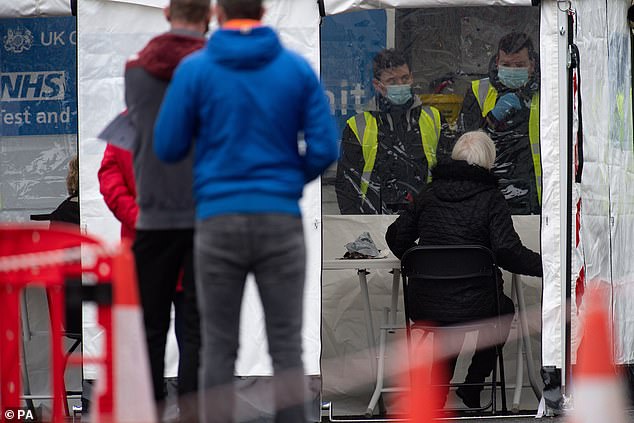 Staff instruct a person on how to carry out a Covid-19 test at a mobile testing unit set up at the White Hart pub in Fernhill Heath, near Worcester

The travellers first test will be taken up to 72 hours before flying – as is the rule currently.

Once home, arrivals must begin their ten-day self isolation.

On their second day in quarantine, travellers need to get a second compulsory Covid test.

It will likely be a polymerase chain reaction (PCR) test which will be posted to Britons to carry out themselves, sources claim. 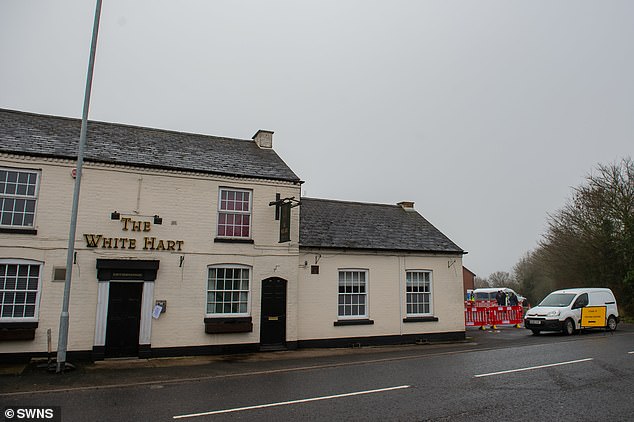 Any positive results as part of surge testing programmes will be sent for genome sequencing to identify the variant – a process which usually takes around a fortnight. Pictured, The White Hart pub

The wider range of symptoms includes shortness of breath, fatigue, muscle or body aches, a sore throat, congestion or a runny nose, and nausea or vomiting.

Public Health England said the most recent tests rolled out in a number of areas of the country this week will be prioritised in a bid to speed up the process.

Testing of around 10,000 people in Maidstone, Kent, was completed on Thursday night.

In Surrey, testing in Woking was expected to finish on Friday with door-to-door deliveries in Egham and Thorpe due to begin on Saturday.