‘We won’t have any buffer’: Squeezed families say Rishi’s National Insurance and fuel duty handout will do little to ease cost of living crisis as they tighten budgets and rule out extravagant foreign holidays

Rishi Sunak has said millions will benefit from cuts to national insurance and fuel duty announced yesterday, but families are unconvinced it will actually ease the huge cost of living crisis.

Under pressure to deliver for the hardest hit by soaring energy costs and a looming tax hike, the Chancellor used his annual Spring Statement to announce a £15billion package of tax cuts.

It included a massive increase in the starting threshold for paying national insurance, worth £330 to an average earner, in a move that will effectively ‘spike the hike’ for most.

He also made a 5p cut to fuel duty that came into force at 6pm last night and will remain in place until March 2023.

And in a significant declaration of intent, he made a dramatic pledge to cut the basic rate of income tax by a penny in the pound in 2024 – adding that he ultimately hoped to ‘go further’.

But last night there were clamours for more help from the Treasury, with a snap poll finding seven in ten people felt the Chancellor had not done enough to ease the pain of soaring prices.

Here, the Mail hears from workers and hard-hit families reacting to the statement and what more could be done.

This is the least he could do, says nurse 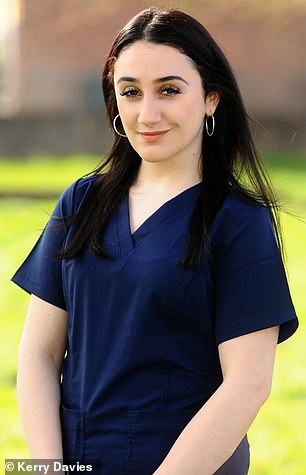 Nurse Aylin Yilmaz, 23, said the Spring Statement’s income tax reduction was ‘brilliant’ and would help a lot of people.

But she said the earlier the cut in the basic rate of income tax – currently scheduled for 2024 – came in ‘the better’ as so many people were struggling with rising costs.

‘Given that things are going to be rising so much with bills, fuel and in supermarkets, this is the least they could do,’ she said. ‘I think [the announcement] is a good sign and should improve things.’

Miss Yilmaz is a GP practice nurse in south London. She lives with her parents and two siblings, aged 21 and ten, and helps with rent and bills.

‘It’s a good sign, given that everything is rising,’ the NHS worker said.

‘To get what you deserve and take home more of what you have worked for is a brilliant idea.’

‘Heating is down as low as we can bear’

Enamel artist Rachel Smith, 40, and her partner Stewart Smith, 38, from Somerset, said the measures would not do enough to help their family.

‘We are worried about how we will make the money back because we’re self-employed,’ said Miss Smith, who makes colourful jewellery which she sells via her business iamrachel.

‘We now have to spend so much more on living costs and won’t get a wage increase. 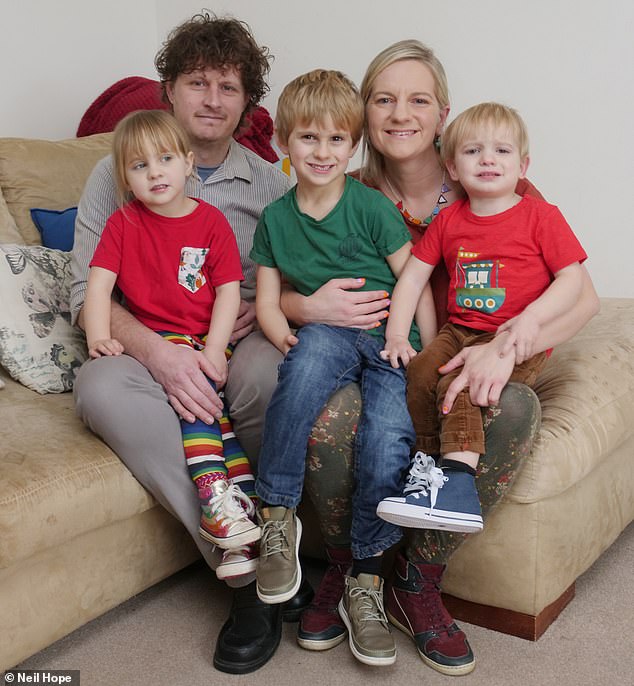 ‘However, material costs are increasing for me as well as daily living costs.’ The couple, who have children Owen, six, Ruby, four, and Zac, two, were disappointed there was no increase to child benefit and said even an extra £10 a month would make a huge difference to helping feed and clothe their children.

The family have already replaced one of their cars with a bi-fuel LPG Dacia due to rising fuel costs.

Their heating is turned down ‘as low as we can bear’ and Mr Smith carries out all repairs on the three properties the couple rent out.

Miss Smith said the national insurance threshold increase was ‘great’ but stressed that it would take a while to feel the benefits as it only comes into force in July.

‘We’ve been completely squeezed, even squished’

Single mother-of-four Mel Knibb said the national insurance threshold increase would ‘soften the blow’ of the rising cost of living.

But the part-time teacher and foreign language assistant added that her family still ‘won’t have any buffer’ for any unforeseen expenses.

‘The national insurance threshold increase was a big surprise,’ she said.

‘It’s a really good thing – it will help a lot of families. For us, it will limit the disaster. It will soften the blow. But it doesn’t change that everything is rising.’ 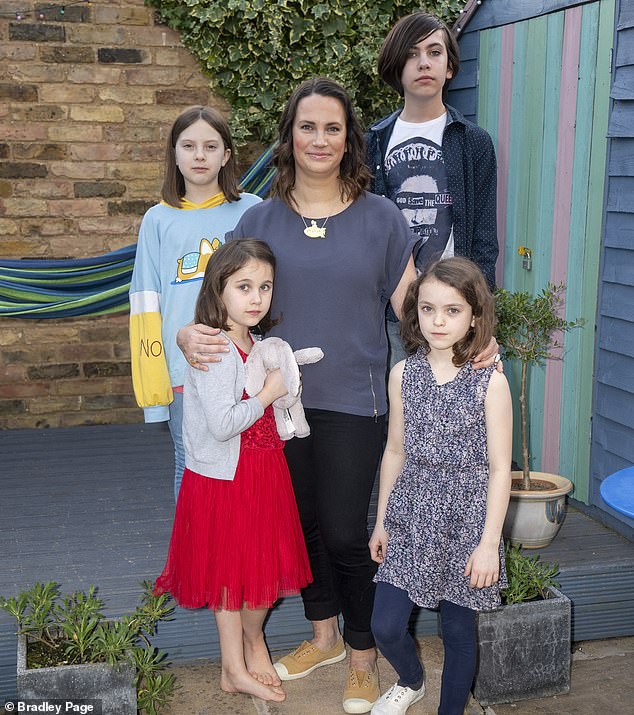 Miss Knibb, 42, also runs Le Coin de Mel, a blog and Instagram account where she shares recipes and crafts, to supplement her income.

‘It’s very scary that all the bills are going up so much and my family won’t have any buffer if any big expenses need to be paid,’ she said. ‘For a family on a single income, every penny matters. We’ve been completely squeezed, even squished.’

She added that she still won’t be able to send her children, JP, 13, Amélie, 11, Ellie, nine, and Elise, seven, to their ballet or swimming lessons – as spending that extra money would be ‘unthinkable’.

Any holidays that aren’t to visit family in Devon or France are also out of the question.

Gemma Holmes plans to install a bank of solar panels ‘sooner rather than later’ after yesterday’s VAT cut. 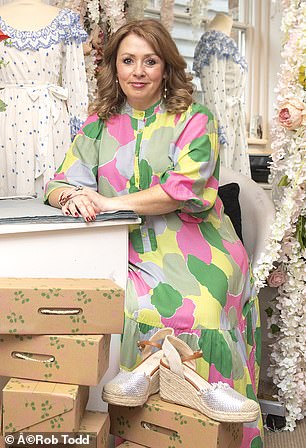 The 47-year-old boutique owner, who lives in Rolvenden, Kent, with her partner Ross, 45, and son William, 12, said of the green tax break: ‘It’s good news because I’m going to save £1,000 on my solar panels. I know it’s only a [5 percentage point] VAT drop but it’s better than nothing, so quite honestly it’s a great thing.’

‘We had looked at it before, but now it’s a more viable option because of that saving. It’s something we’ll consider doing sooner rather than later because of the new cut.’

Miss Holmes, the owner of women’s fashion boutique ODYL and a presenter on shopping channel QVC, plans to put solar panels on the family’s seven-acre plot of land.

She believes this could not only power their four- bedroom home, but also the holiday cottage and shepherd’s hut they rent out.

‘We will hopefully have a bank of solar panels,’ Miss Holmes said. ‘We will try to sell anything we don’t use back to the grid – but I suspect that won’t be a huge amount!’

Florist Gemma Hales said that – even with the 5p cut to fuel duty – it was still cheaper to import her flowers than drive to buy them locally.

The 32-year-old has her blooms delivered from Holland, which she thinks costs hundreds of pounds less a month than making the regular journey a few miles across London.

Miss Hales, who runs Femme Petale in Wimbledon, south London, said: ‘Fuel is something that’s increased a lot, so this cut is a drop in the ocean. 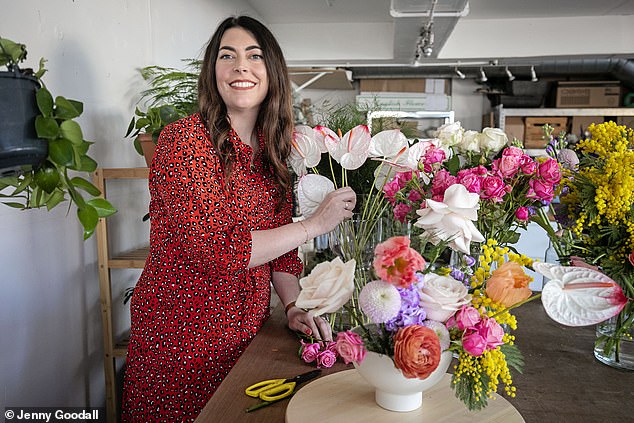 ‘It’s something… but when you look at how much fuel has gone up in the last year it doesn’t make enough of a difference.’

Including London’s Ultra Low Emission Zone (ULEZ) charge, she calculated it would cost her around £300 more a month to make the ten-mile round trip to New Covent Garden Market, in Nine Elms, a few times a week than order from Europe.

Miss Hales, who decorates customers’ weddings, is trying to save up for her own.

‘It’s not just the petrol, it’s everything else on top of it. The ULEZ, as well as petrol prices being at a record high, make things so much harder for a small business like mine. Ordering things online to be delivered to me is just so much cheaper, quicker and easier.’