Home » World News » Family of girl with cancer say her bond with pony is &apos;helping her&apos;

The rescue pony called Potter who is helping cancer-stricken girl, 12, defy the odds after doctors said she would not survive 2018 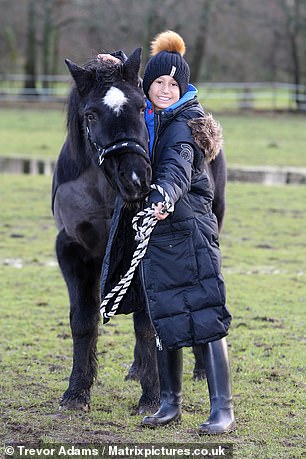 Twelve-year-old Bryony has an aggressive form of cancer – and her family believe it is her love for Potter that is keeping her going.

The pony was going to be put down after he developed a severe ear infection but Bryony begged her mother Carol to take him on and look after him.

Bryony was diagnosed with acute myeloid leukaemia in November 2017 after suffering bad headaches and tiredness.

Mrs Faasen had been told her daughter would be lucky to still be alive for Christmas 2018 after her cancer proved too aggressive for chemotherapy.

But Bryony has defied doctors’ expectations, and her family have attributed her survival to the bond she has with Potter.

Teacher Mrs Faasen, 45, who lives in Hindhead, Surrey, with husband Armand, 46, also a teacher, and their younger son Kale, nine, said: ‘Bryony said to me the other day, ‘Mummy I can’t die, because who would look after Potter’.

Acute myeloid leukaemia (AML) is a type of blood cancer that starts in young white blood cells in the bone marrow.

AML affects around one in 200 men and one in 255 women in the UK at some point in their lives.

Approximately 19,500 new cases occur every year in the US.

It is most often diagnosed in older people.

AML’s exact cause is unclear, however, risks include:

AML is usually treated via chemotherapy. A bone marrow or stem cell transplant may be required.

‘It brought tears to my eyes, but I know that pony keeps her going. Even when she’s not feeling well enough to ride, she goes down to the stables just to hug and talk to him. He really does give her something to fight on for.’

Mrs Faasen added: ‘She has always been really sporty and loved doing ballet and trampolining, but she woke up one morning and said she had such a bad headache she couldn’t lift her head off her pillow.

‘I took her to the doctors and they said it was a hormonal headache and wanted to give her beta blockers. But I wasn’t happy with that so we took her to the local A&E department.’

At the hospital, doctors had devastating news for the couple, and told them that Bryony had leukaemia. She had to start chemotherapy treatment straight away at the Royal Marsden Hospital in London.

Initially doctors thought the treatment was working, and she had a stem cell transplant.

But then in the summer of 2018 doctors discovered that her cancer had returned, and it was proving resistant to all available treatments.

Doctors said they didn’t know whether Bryony would survive to see Christmas of that year, but she managed it, and then in March last year came an unusual form of medicine for her.

Rescue pony Potter arrived at the local stables and Bryony instantly fell in love with him.

Mrs Faasen said: ‘His previous owner had died, and he risked being put down, so Bryony begged to look after him. Since then, they have been inseparable. Her face lights up when she is with Potter, and he adores her too. She’s helped him recover, and he keeps her going too.’