A former Labour councillor has been convicted of criminal damage after he daubed graffiti claiming Charles Dickens was racist on council-owned property in a town.

Ian Driver gave a lengthy self-defence at court in Margate, Kent, in which he insisted he was driven to his actions after researching ‘institutionally racist’ local authorities.

The father-of-three from Broadstairs told how he believed something needed to be done to protect the lives of local black, Asian and minority ethnic people.

But Driver, 64, who has also represented the Green Party, was handed a £1,400 fine plus a two-year conditional discharge at Margate Magistrates’ Court yesterday. 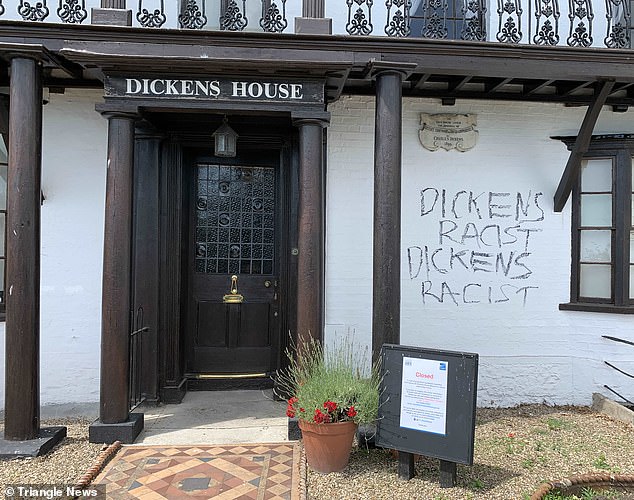 Ian Driver daubed graffiti on Dickens House, a museum about the author in Broadstairs, Kent 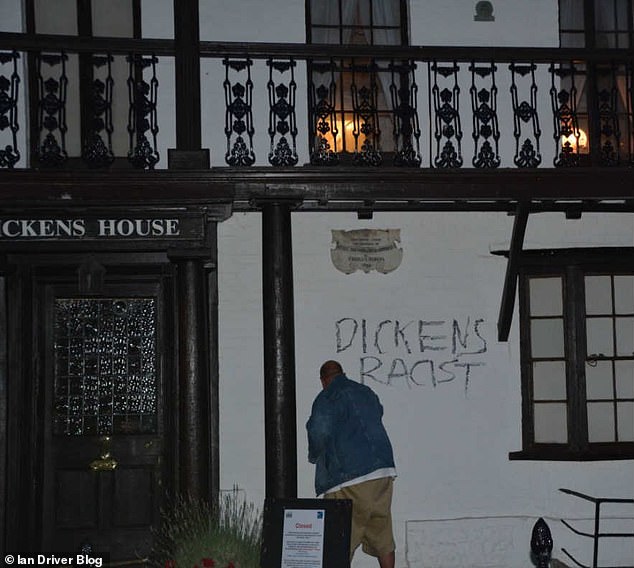 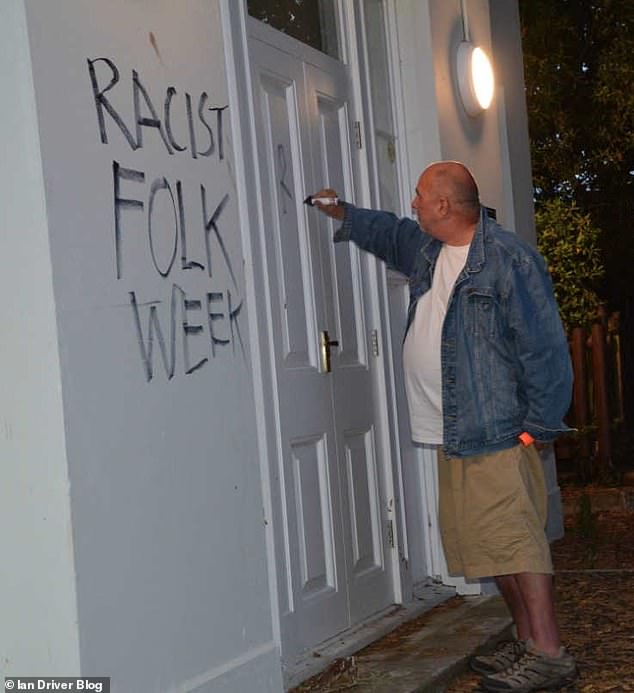 Driver was hauled before the courts after he posted on his blog about defacing a plaque to controversial blackface minstrel ‘Uncle Mack’ in Broadstairs in June 2020.

Why do people say Dickens was racist?

Charles Dickens is one of the most beloved authors of the Victorian era.

His works, including A Christmas Carol and Oliver Twist, are viewed as championing the plight of the working class during the Industrial Revolution. But some of his works have garnered criticism since his death in 1870 for anti-Semitic and genocidal views.

In 1857, following an unsuccessful uprising by Indians against the British East India Company, Dickens wrote he wanted to ‘exterminate’ the race.

Dickens, writing as though he were a addressing Indian citizens, said: ‘I… have the honour to inform you Hindoo gentry that it is my intention, with all possible avoidance of unnecessary cruelty and with all merciful swiftness of execution, to exterminate the Race from the face of the earth.’

In his book The Noble Savage, he wrote: ‘I call a savage as something highly desirable to be civilised off the face of the earth.’

His depiction of the character Fagin in Oliver Twist has also been described as anti-Semitic – both during the time Dickens was alive and today. The first 38 chapters of the book refer to Fagin as ‘the Jew’ more than 250 times’ compared to calling him ‘Fagin’ or ‘the old man’ 42 times.

Dickens said he made the character Jewish because it ‘unfortunately was true, of the time to which the story refers, that the class of criminal almost invariably was a Jew’.

It is housed in the cottage that was the author’s inspiration for the home of Betsey Trotwood in David Copperfield.

Driver targeted both buildings and a street sign for Dickens Road and also left graffiti on the Uncle Mack memorial in Victoria Gardens.

This is dedicated to James Summerson who led a blacked-up minstrel band that performed in the town between the 1880s and 1920s.

The plaque – which had been covered with a wooden box while council bosses deliberated on whether to remove it – was covered with pink paint by Driver, who admitted his graffiti was ‘juvenile’.

Prosecutor Edmund Body told how the cost of the damage from the graffiti spree totalled £3,500 and said Driver could have used legal means to protest.

He also described Dickens as a ‘genocidal racist,’ adding he believes local authority’s attitudes towards controversial historical figures ‘perpetuates a culture’ where racism is acceptable.

He added that his ‘actions were genuinely acts to protect others,’ describing how he was ‘inspired’ by the toppling of the Edward Colston statue in Bristol and subsequent Black Lives Matter protests, one of which he had attended locally before defacing the Uncle Mack plaque.

He also described how his self-proclaimed ‘citizen journalism’ had seen him flooded with hundreds of negative comments on social media which led him to believe other means of raising awareness for anti-racist causes would have been difficult.

Driver admitted responsibility for the graffiti last June but denied seven counts of criminal damage, saying his actions could be justified. 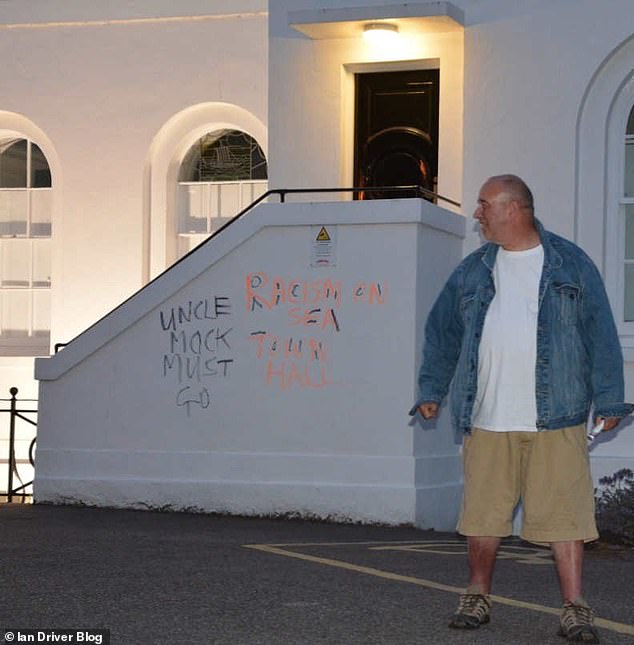 He also asked the bench to take into account the ‘excessive’ 30 hours he spent in custody and the 268 days on curfew before they deliberated for more than an hour.

Sentencing, Magistrate Angela Moyles told Mr Driver: ‘We do not accept there was an immediate lawful excuse or believe it was done to avoid circumstances that could not otherwise be avoided.’

Addressing Mr Driver’s defence, she told him it was not up to the court to decide whether his actions were ‘justified’.

‘The crucial question is not whether the defendant’s actions were justified but whether he can be excused on the grounds that a reasonable person would have acted in the same way,’ Ms Moyles said. Mr Driver’s court costs were waived. 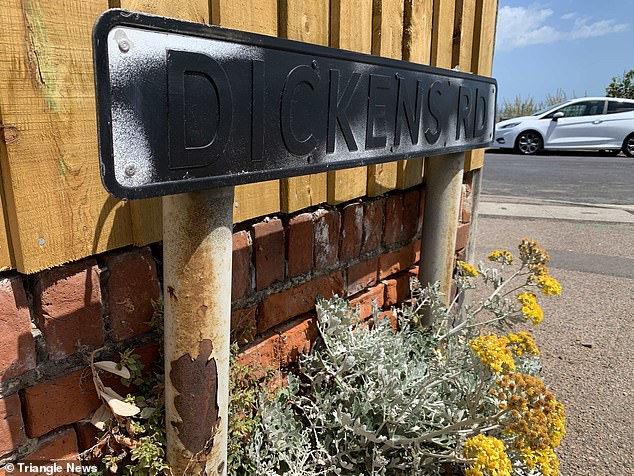 Driver gave a lengthy self-defence at court in Margate, Kent, in which he insisted he was driven to his actions of graffiti after researching ‘institutionally racist’ local authorities

Speaking after his court appearance, Mr Driver said: ‘I don’t regret for a moment what I did and under similar circumstances I would do the same.

‘I’m relieved and I think I had some degree of sympathy from the magistrate.’

Reflecting on the court process, he said: ‘It was a fantastic learning process, although I knew I knew from the word off that I was never going to win because the defences I used are not very often successful.

‘The fact that I was found guilty but then given a conditional discharge, it’s probably the lowest punishment you can get.’