Oh dear! Ferrari 488 owner crashes his brand new £250,000 supercar on the same day he bought it – after driving it for just TWO miles

The owner of a brand new £250,000 Ferrari crashed the supercar on the same day it was purchased – after driving for just two miles.

The luxury sports car, believed to be a Ferrari 488, was the sole vehicle involved in the collision in Derby earlier today.

Photos shared by Derbyshire Police show the front bonnet of the vehicle crumpled with scratches all across it.

The driver, who was uninjured in the crash, was left counting the cost shortly after he purchased the car in Derby. 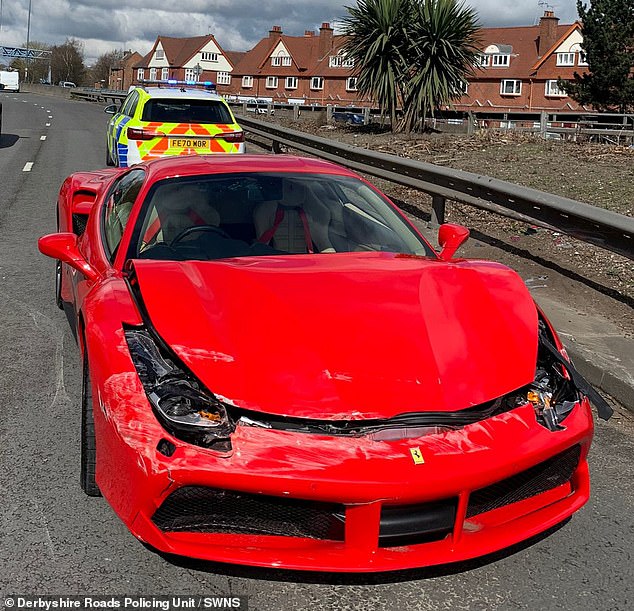 Derbyshire Roads Policing Unit wrote on Twitter: ‘Driver bought a Ferrari this morning and crashed it after driving it less than 2 miles. No injuries.’

One person tweeted: ‘OH NO!! Wounded.’

Elsewhere, a user added: ‘You would be absolutely gutted.’

Someone commented: ‘I take it due to the fact the car facing the wrong way. He’s given it a bit too much gas?’

A Derbyshire Police spokesperson said: ‘East Midlands Ambulance service alerted us to reports of a collision on St Alkmund’s Way in Derby just before 11am today.

‘One vehicle was involved in the collision. No injuries were reported. 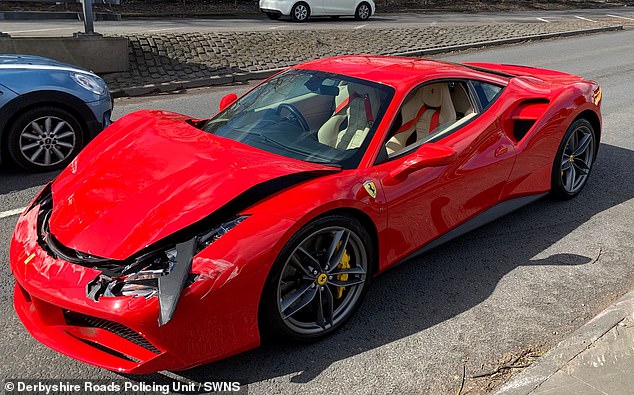 One person said: ‘How mortified would you be? That is going to take some fixing’

‘The car was moved off the road and the driver arranged for their own recovery.

‘The driver was not arrested or charged with any offence.’

One person put: ‘What on earth was he doing? Is he even licensed to drive?’

Another added: ‘How mortified would you be? That is going to take some fixing.’

And still another said: ‘Good to hear no injuries but maybe too much power for this driver and it looks like he’s the April Fool for crashing’