A fisherman has been filmed holding a baby dolphin underwater before slaughtering it in Japan’s infamous ‘Red Cove’.

The horrifying scenes were recorded in September in Taiji, a small coastal town in Wakayama Prefecture, which was the filming location for the 2009 documentary The Cove.

Yabuki, who has seen 32 juvenile dolphins killed in two years, told 9newsAustralia this killing made his ‘blood run backwards’.

After the diver held the dolphin underwater, Yabuki said he dragged the calf under a tarpaulin, where it was slaughtered.

Admitting that he didn’t witness the actual slaying because of the tarpaulin, Yabuki said it was likely the calf was killed by a method called ‘pithing’, which involves driving a metal rod into the dolphin’s back to sever its spinal cord. 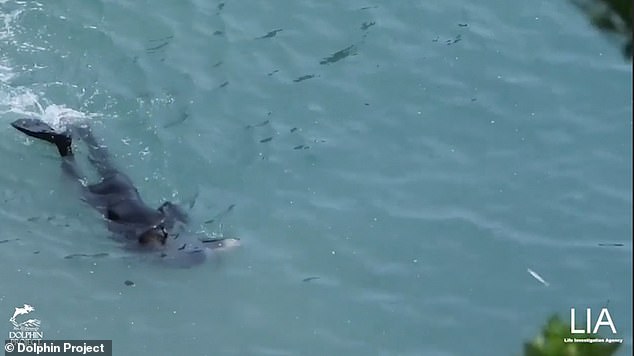 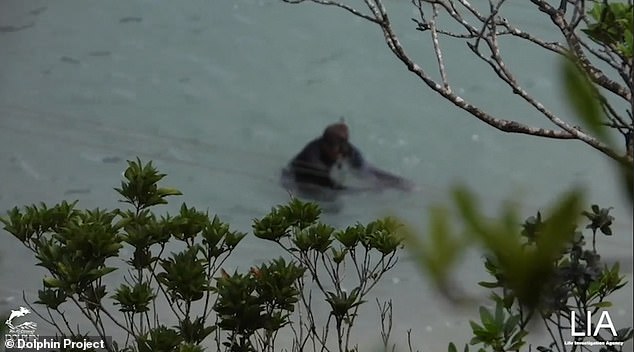 The diver holds on the dolphin underwater before dragging it under a tarpaulin to slay it in Taiji, Japan in mid-September

The Japanese Government maintains that ‘pithing’ is a humane way of slaughtering dolphins but activists argue it’s impossible to ensure the animals are killed quickly.

In the cove, where swimmers and boats herd the animals into a cordon, activists say it takes several attempts of driving the pole into them to kill the creatures – all done while they’re still alive.

Dolphin-hunting season in Taiji runs from 1 September to 28 February and the event was the subject of the 2009 critically acclaimed documentary The Cove.

The feature documentary showed the herding of dolphins into enclosed water pens for slaughter which turned the sea red.

Each year the Japanese Government sets a quota for the amount of each type of dolphin which can be legally slaughtered.

For the year 2020/21, fishermen are allowed to kill 1,749 of dolphins, which include the bottlenose, rough-toothed, and false killer whale species. 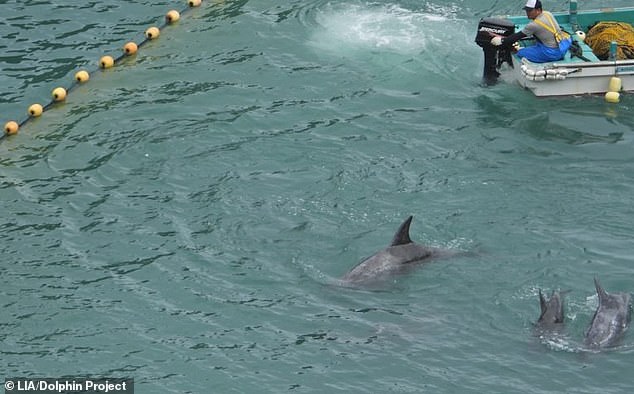 Fishermen can be seen herding dolphins in the infamous ‘Red Cove’ in Taiji, Japan

The dead animals are either killed for their meat or captured to be sold for live trade.

The water in the cove has been turned completely red six times this year, according to animal rights NGO the Dolphin Project.

The Fisheries Agency of Japan’s ‘Whaling Affairs Office’ told 9News in a statement: ‘Japan’s basic policy is the ‘sustainable use of aquatic living resources including cetaceans based on scientific evidence.’

‘The Fisheries Agency of Japan (FAJ) is responsible for the management of cetaceans [whales and dolphins] and has conducted a series of scientific researches on cetaceans.

‘Based on the results obtained from those researches, it calculates and sets catch quotas for dolphin fisheries species by species every year.