Five brand new £1million luxury mansions will be torn down because plots were ’33 per cent too big’ after homeowners desperately fought to save them in a bitter, five-year-long planning row.

The six-bed detached properties in the West Pennine moors are up to a third bigger and in different locations than they were allowed, a planning inquiry heard.

Bolton Council issued an enforcement notice for demolition in 2018 and a planning inspector has now given the householders 12 months to demolish the structures and return the site to its previous state.

That period has been extended from a six-months due to the ‘hardship’ the decision will impose on the appellants, whose buildings are at Grundy Fold Farm.

At a previous hearing homeowner Elan Raja said he paid £1,057,000 for the plot in 2016 and claimed he has had since spent more than £215,000 on the rental of an alternative property and other costs.

He said he had suffered from severe stress and anxiety coping with the immense demands of the matter and had suffered cardiac problems as a result of the ‘nightmare’. 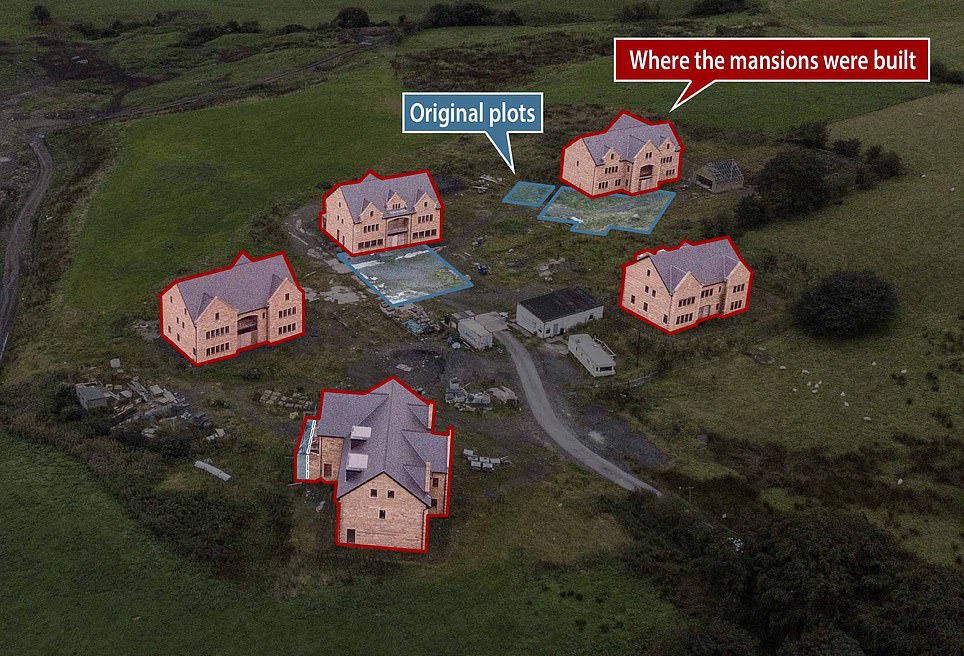 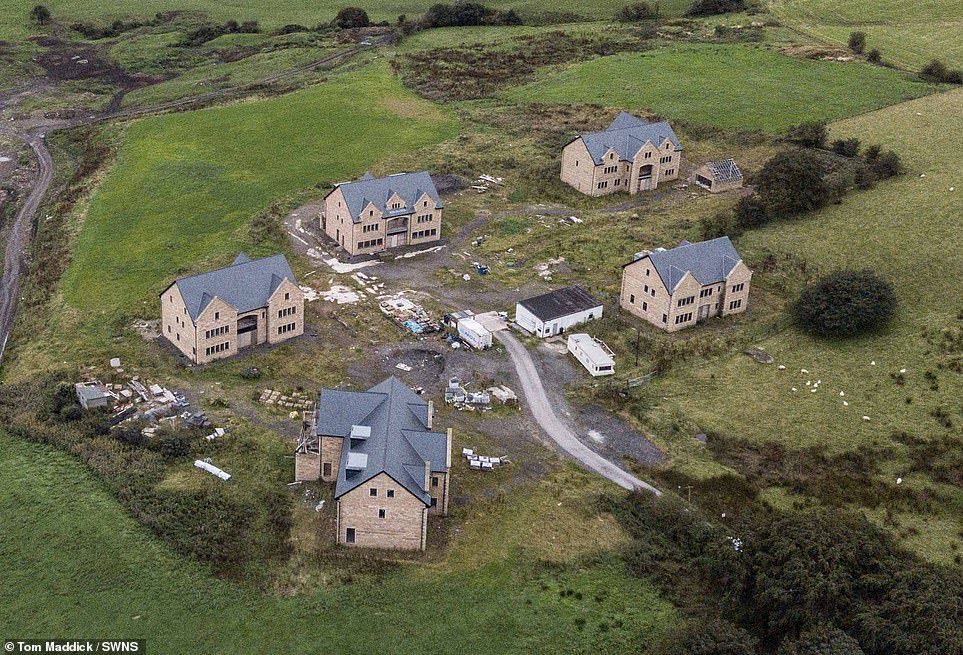 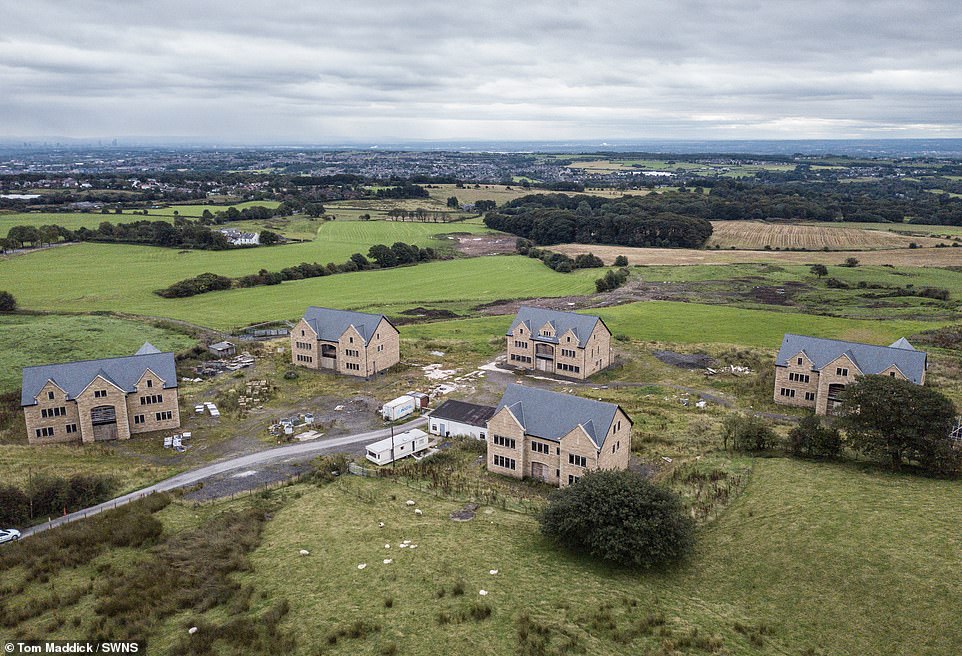 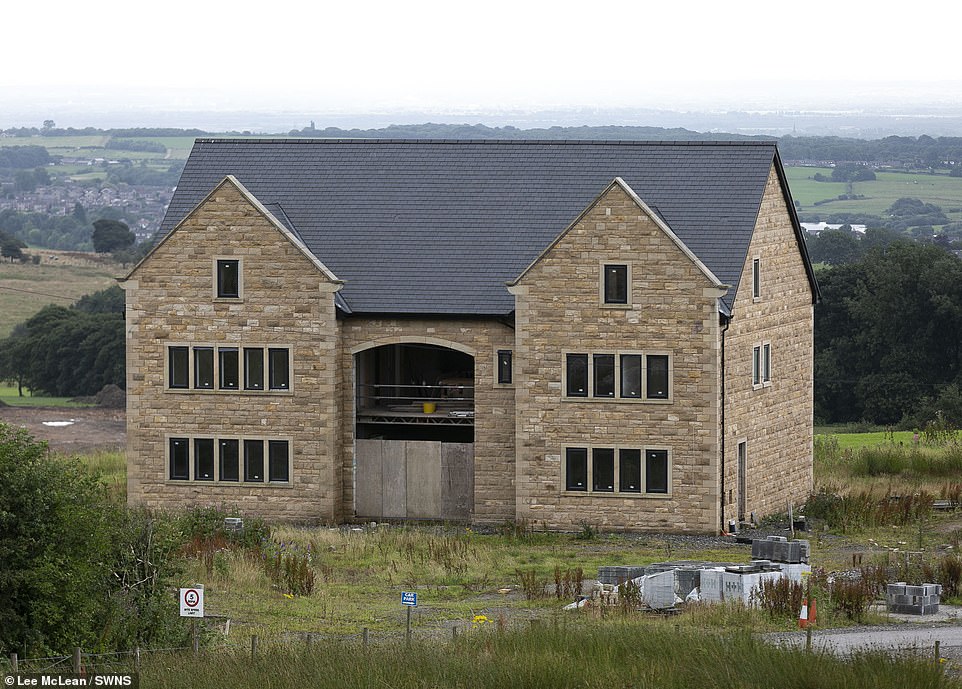 The six-bedroom, stone-built exclusive houses were built on a stunning plot in the West Pennine moors near Bolton, Lancashire, but finishing works were put on hold after a complaint was filed in October 2016 (pictured still unfinished in 2019)

The development began in 2014 when planning permission was granted for the conversion of a former farmhouse and four new homes around a central courtyard.

The stone-built exclusive homes were erected on a sprawling plot near Bolton, Greater Manchester.

But finishing works were put on hold after a complaint was filed in October 2016, and Bolton Council found the houses were not being built in accordance with the planning permission.

The local authority first issued an enforcement notice to flatten the entire development in 2018 following an impasse with the developers, Sparkle Developments.

The appeal claims the enforcement notice issued by the council to demolish the homes was excessive and too harsh to remedy any breach in planning regulations. 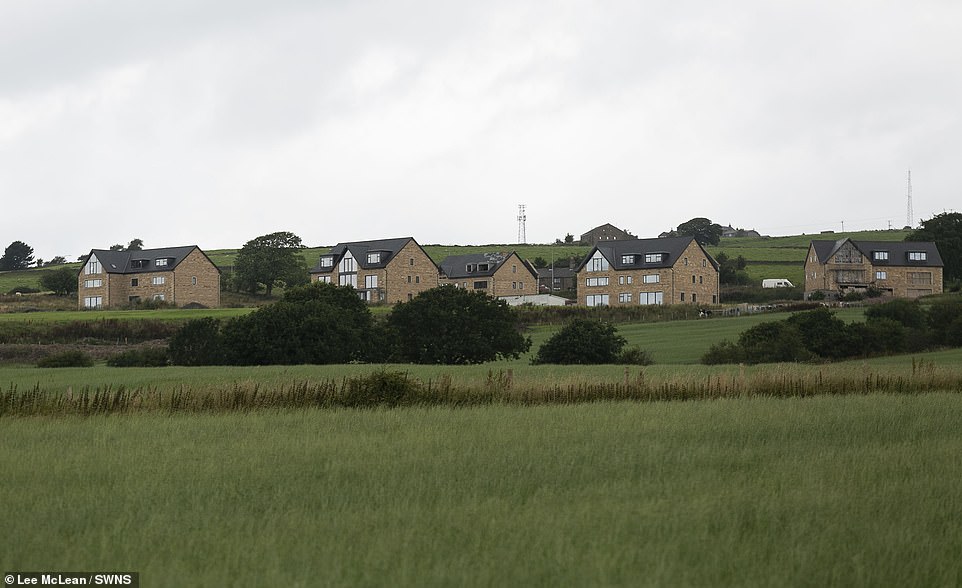 Planning permission was originally granted in August 2014 for five houses at the site, but the mansions were built bigger, in different places and facing in different directions to the initially agreed scheme (pictured in 2019) 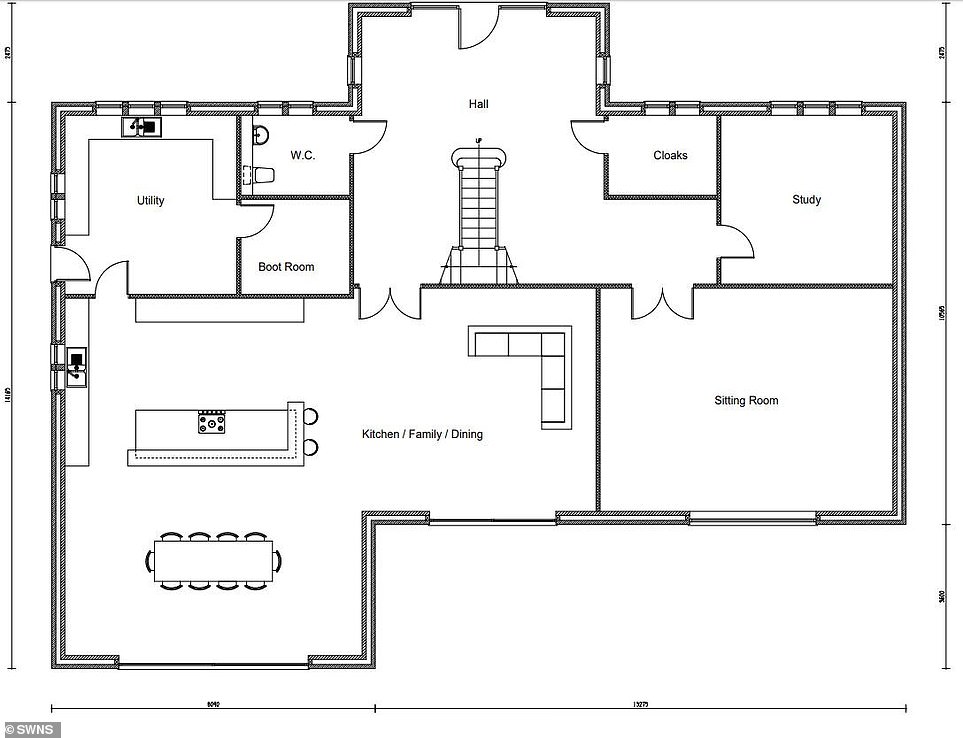 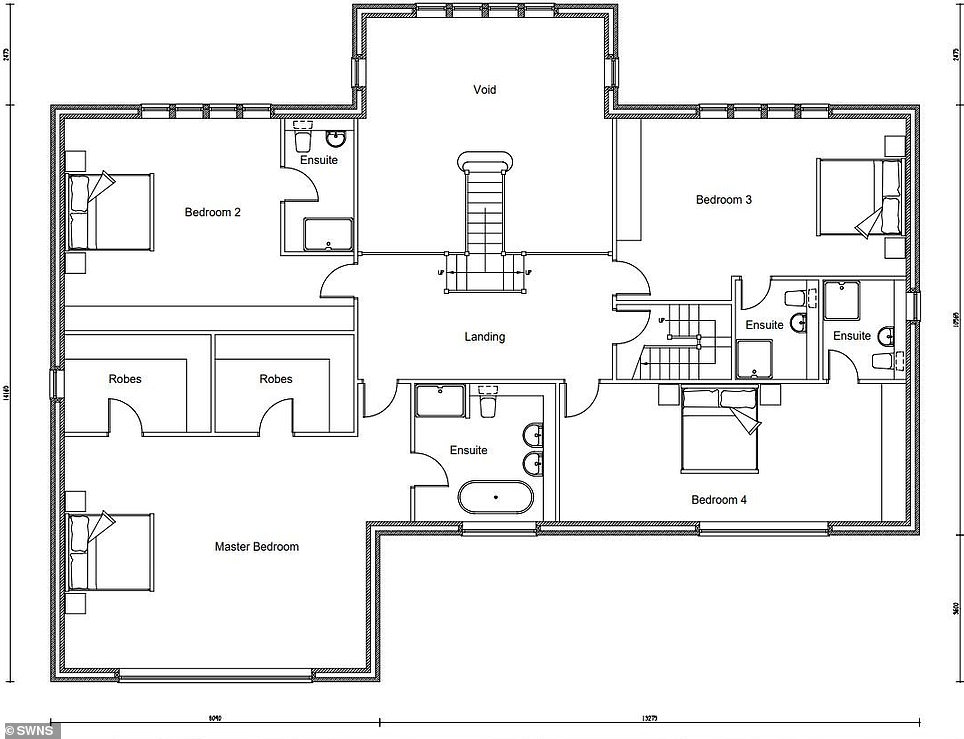 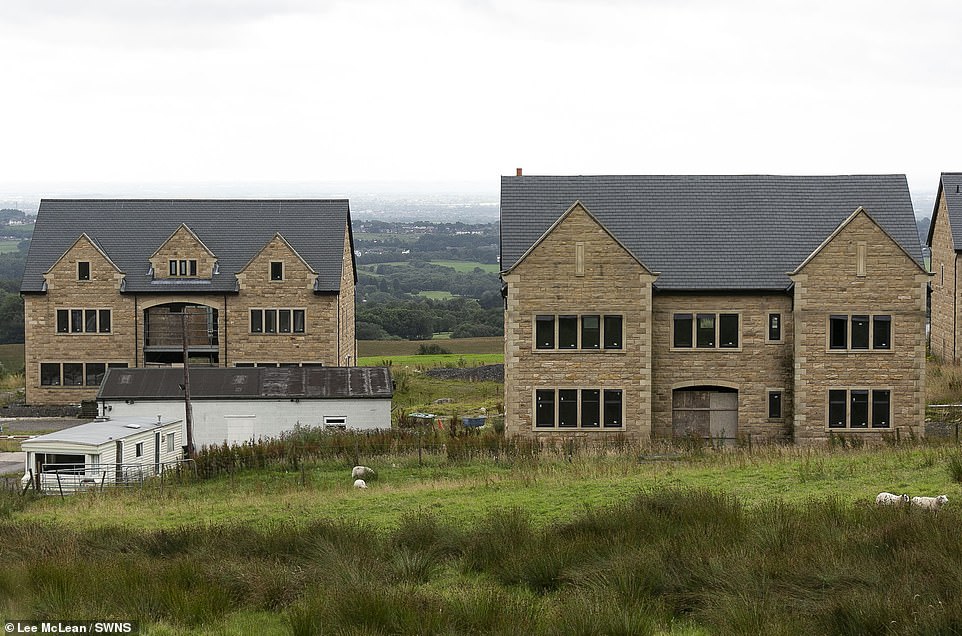 The buildings, known as Grundy Fold, had been put in different positions on the development than those agreed and some were bigger than permitted (pictured in 2019) 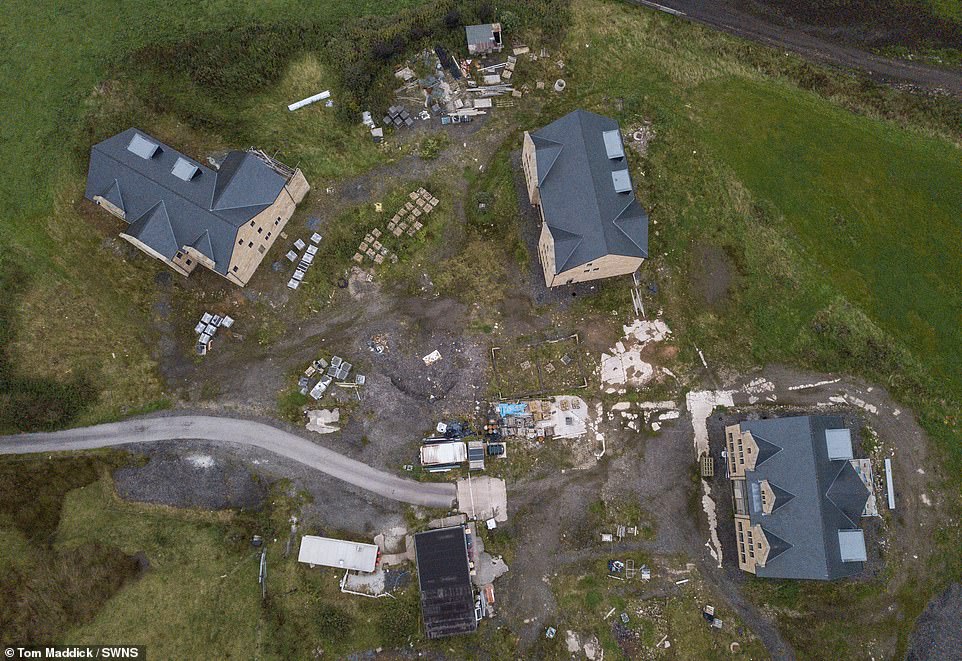 The owners now face the prospect of a ‘fall back position’, which is to demolish the existing buildings and rebuild in the correct areas to the correct size.

That planning permission, which is still in place, is for just four dwellings and conversion of the former farmhouse, which was demolished and stands partially rebuilt.

A four-day planning inquiry in March heard from plot holders and their lawyer as well as from Bolton Council.

Developers Sparkle demolished the farmhouse and began building afresh and partially constructed four new homes in the wrong locations and with different dimensions than agreed, it was heard.

The inquiry considered two appeals from the house owners, one against the demolition enforcement and another to try and overturn a decision on a subsequent amended planning application.

Both appeals were dismissed yesterday. 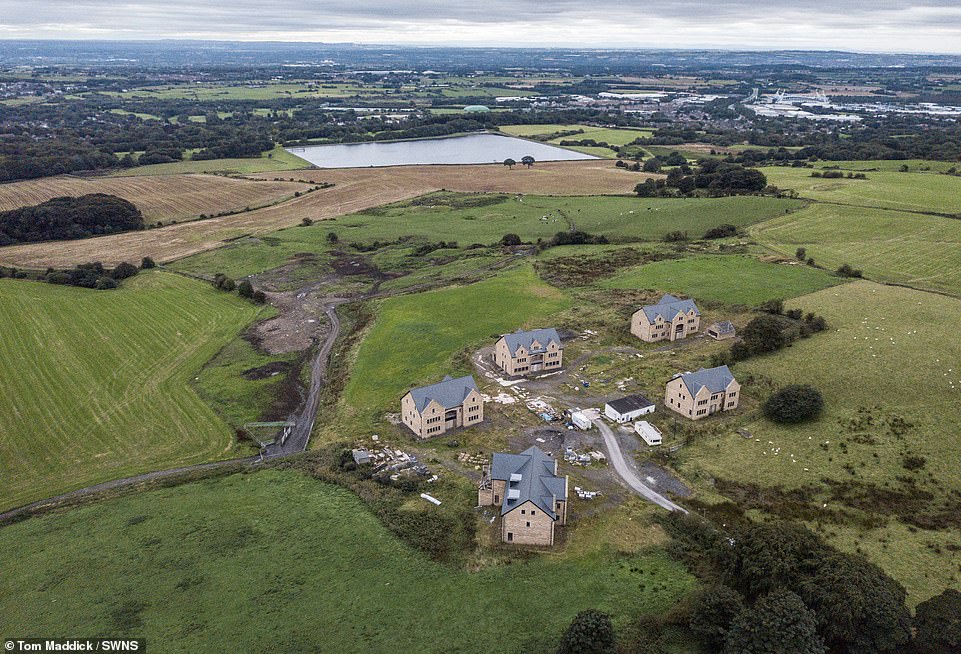 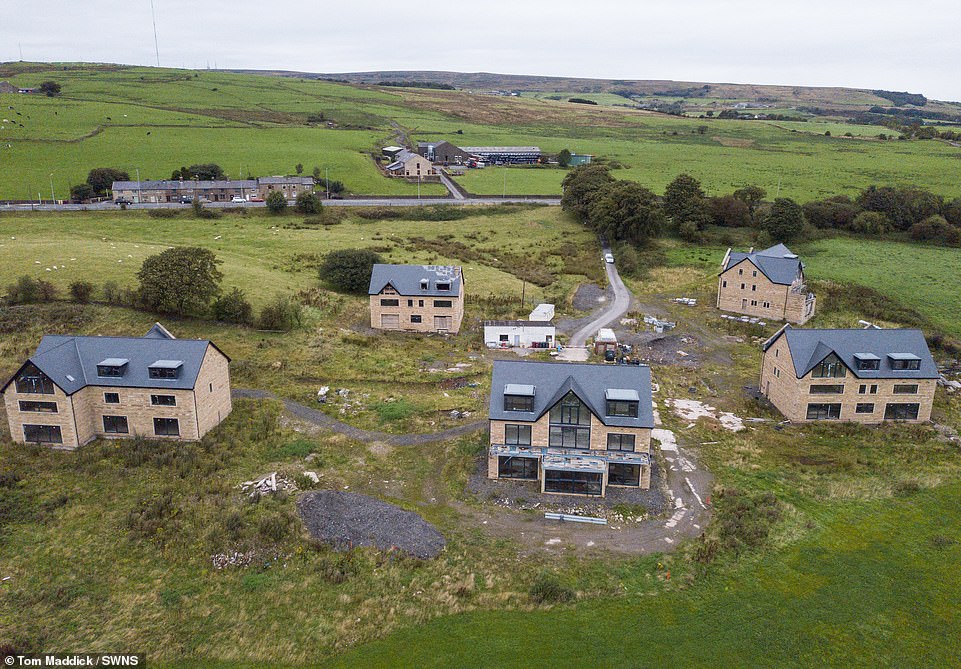 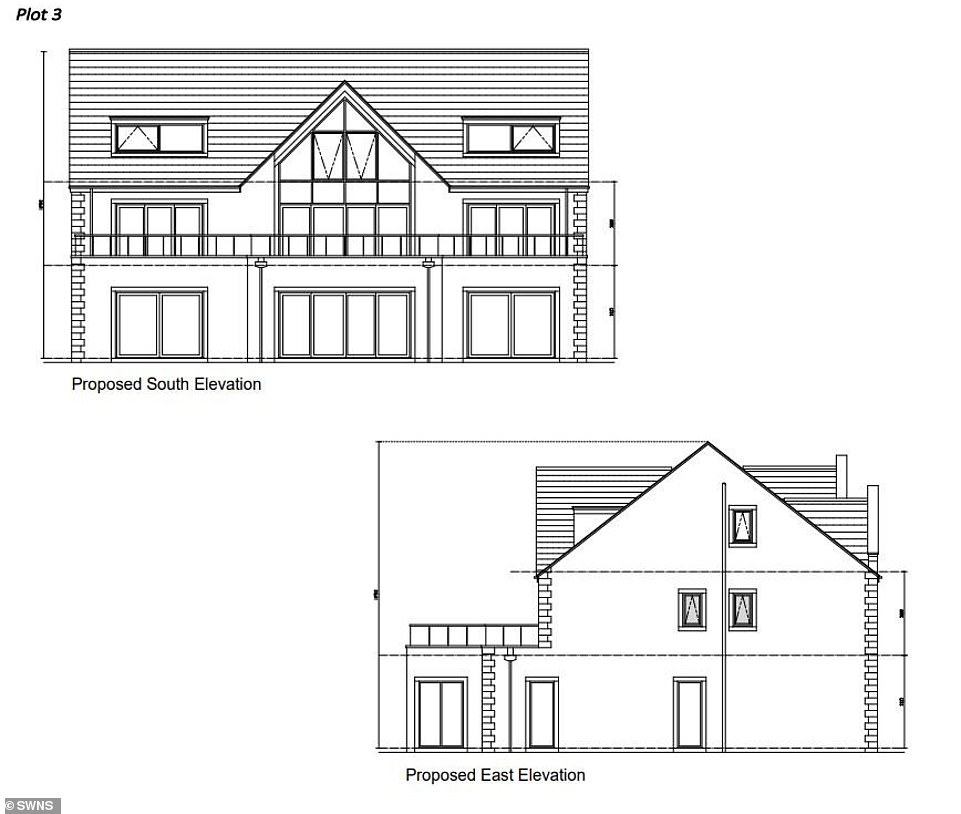 At the inquiry, Bolton Council argued harm had been caused to the green belt.

‘The character of the area is scattered farms, individual rural houses and groups of houses clustered into small villages located below the uplands.

‘The original plans were expressly designed to be compatible with that settlement pattern.

‘They were sensitively sited in a hamlet form of development.’ 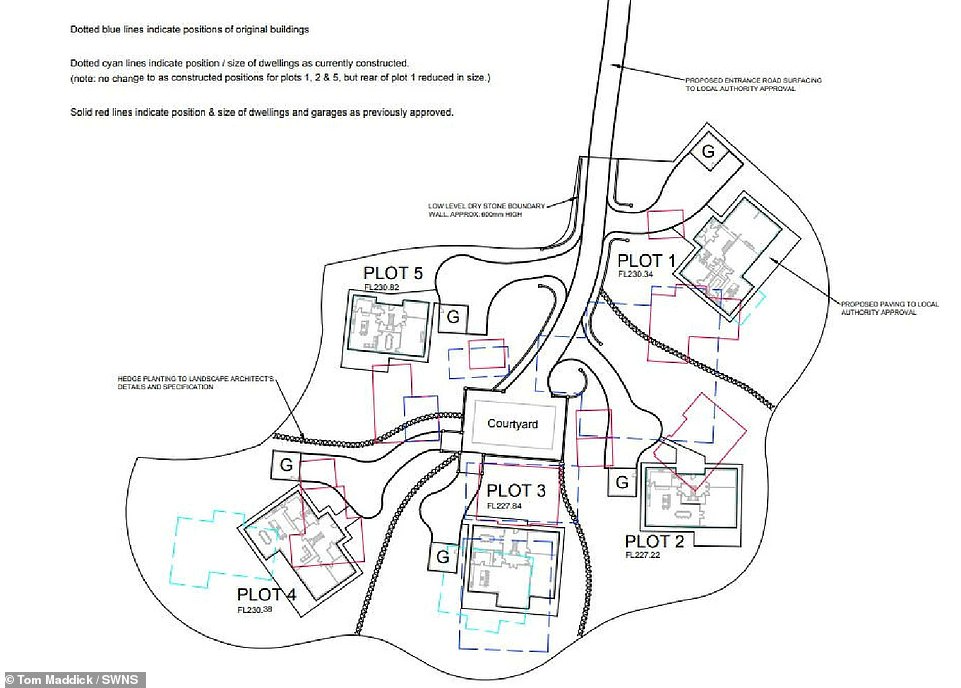 He said that the current location of the houses represents a ‘significant departure away from the clear design intentions of the 2014 scheme’.

He also argued that the enforcement action to order demolition was not proportionate to the breaches of planning.

In the decision notice, planning inspector Jason Whitfield said: ‘Both appeal A and appeal B would result in a greater presence of built development in the green belt than the fall back position.

‘I find that this greater increase in built form would be harmful, both spatially and visually, when located in an area characterised by openness and on a site which, when considered at its baseline, is largely free of built form.

‘As a consequence, considering all the evidence before me, I find the harm resulting to green belt openness from the appeals would be greater than any such harm resulting from the fall back position.’