Liverpool: Keir Starmer has opened the Labour conference with a rousing rendition of God Save the King – a move that went off without a hitch, defying fears that the UK Opposition Leader could be heckled by ultra-Left members of the party.

The show of patriotism – the first time Labour has opened its conference with the national anthem – came as polling showed a surge in support for both the monarchy and the Labour Party, which is hoping to bring an end to what will be 14 years of Tory rule at the time of the next election. 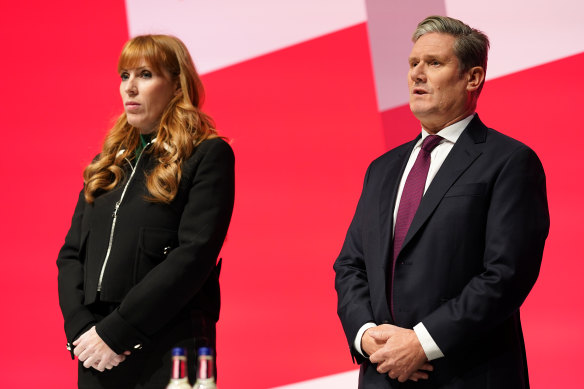 The opposition leader, addressing party members in Liverpool in England’s north-west – a part of the country that often touts itself as “scouse, not English” – said he was proud to lead a tribute to the late Queen.

“Between the history we cherish and the history that we own, she was the thread, a reminder that our generational battle against the evil of fascism and the emergence of a new Britain out of the rubble of the Second World War don’t only belong to the past, but are the inheritance of each and every one of us,” Starmer said.

“[She was] an example that taught us that whatever challenges we face, the value of service endures.

“As we enter a new era, let’s commit to honouring the late Queen’s memory. Let’s turn up our collar and face the storm, keep alive the spirit of public service she embodied. And let it drive us toward a better future.” 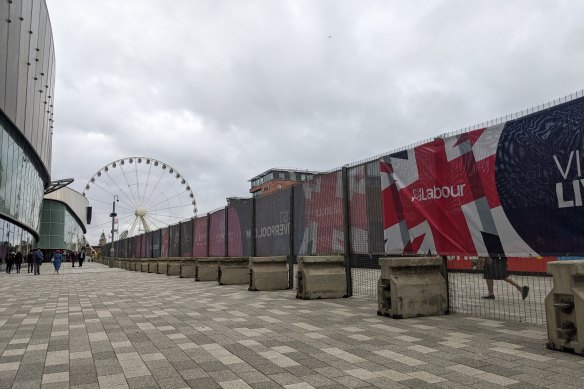 The Union flag is emblazoned on a wall outside the Labour Party conference in Liverpool. Credit:Latika Bourke

Those in the conference centre stood and held one minute’s silence for the Queen before singing the anthem that now carries her son’s new title.

The Union flag features heavily at this year’s party conference, appearing on stage as part of the official backdrop where shadow ministers have given set-piece speeches, as well as around the venue.

It is yet another clear break with the Jeremy Corbyn era when the party was led by its hard-Left faction and routed at the 2019 election, losing lifetime Labour seats to the Tories. 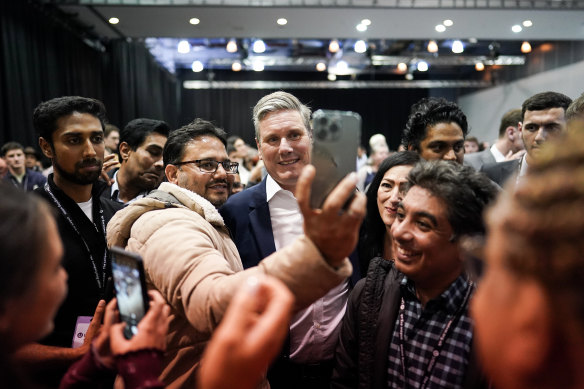 James Johnson, a former Number 10 pollster, said research conducted by his firm, J.L Partners, showed for the first time that a majority of young people now supported the monarchy.

The poll showed nationwide support for the crown at 66 per cent but at 55 per cent among 18- to 24-year-olds – up from 47 per cent in February prior to the Queen’s Platinum Jubilee.

Prince William, who has taken up his father’s climate advocacy, is the country’s most-loved royal with a 69 per cent approval rating, followed by his wife Catherine, who was just one per cent below.

Support for King Charles III surged by 27 per cent to 41 per cent.

“This poll shows there’s only one road in town for any mainstream political party when it comes to the monarchy: embrace it or place yourself on the wrong side of voters,” Johnson told The Sydney Morning Herald and The Age. 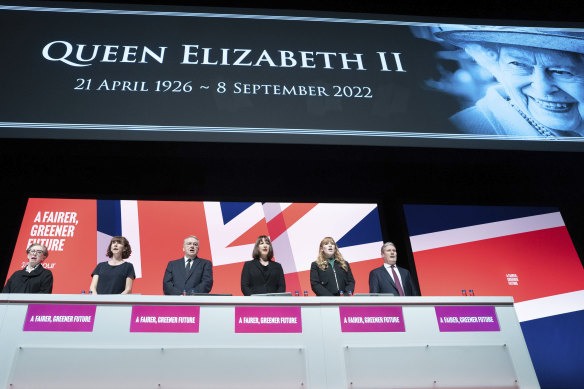 The Queen is looming large over the Labour Party conference.Credit:PA

“The average Brit, especially older voters who Labour must win to gain power, is saddened in the aftermath of Queen Elizabeth II’s death but also more enthusiastic about the monarchy than ever.

“Being patriotic is no sufficient condition for Labour victory, but it is a necessary one – and today’s events at Labour conference show the party has taken one step closer to the voters it must win.”

Britain is due to go to the polls in two years’ time when new Prime Minister Liz Truss is hoping her massive gamble on cutting taxes for companies and the rich will kickstart Britain’s somnambulant economy.

Starmer has vowed to reverse her tax cuts for the wealthy, but he plans to keep in place a 1 pence tax cut for those on lower incomes.

Separate polling conducted by Savanta and commissioned by an internal Labour pressure group, LabourList, showed Starmer could win government with a 56-seat majority after the opposition opened up a 12-point lead over the ruling Conservatives.