A motorcyclist was killed Sunday after a lightning bolt struck his helmet on Florida’s I-95, authorities said.

The motorcyclist was hit while traveling southbound on I-95 in Volusia County in the afternoon, according to Florida Highway Patrol. 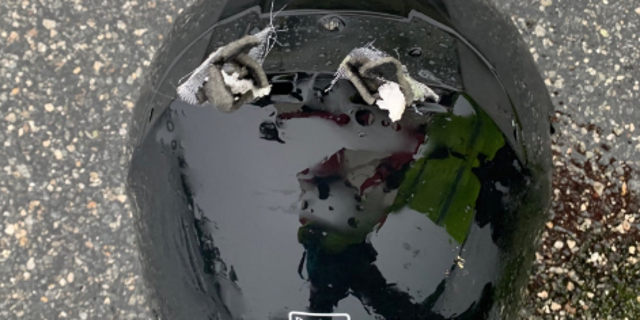 The motorcyclist’s helmet was cracked and burned from the lightning strike, officials said.
(Florida Highway Patrol)

A photo posted on the agency’s official Twitter page showed the motorcyclist’s helmet cracked and burned from the apparent lightning strike.

The motorcyclist was a 45-year-old man from Charlotte, N.C., Orlando’s Fox 35 reported. His name was not released.

An off-duty Virginia trooper cited by the station said he witnessed the strike happen. The impact from the lighting caused the motorcyclist to exit the roadway and then crash, he said.

No other information was released.