Moment more than 100 women and children finally evacuate from the rubble of the besieged Azovstal steel plant in Mariupol: Ukraine’s generals call for extra time to rescue hundreds more including the injured who are trapped below among dead bodies

This is the moment more than 100 civilians trapped inside the Azovstal steel works in the besieged Ukrainian port city of Mariupol were able to crawl to safety after the first evacuation took place at the weekend.

Video taken by rescuers from the UN and Red Cross showed women and children climbing up a steep pile of rubble and into the daylight, having spent weeks underground amidst near-continuous shelling by the Russians. They were greeted by a bombed-out wasteland, and required help from Ukrainian soldiers to cross it.

Having boarded buses due to carry them to safety, one woman showed her baby to the camera. She said he was born just two months ago, meaning he has spent his entire life hiding from Russian bombs and has never known a Ukraine at peace.

President Volodymyr Zelensky said in a Sunday night address that more than 100 people had been evacuated from the steel plant after a two-day ceasefire held, and hoped that more would be evacuated today.

It is thought the rescue mission began on Friday, but was only reported to the media Sunday when the first phase had been completed. Those leaving Azovstal are being taken to nearby villages under Russian control, but are then being sent to the city of Zaporizhzhia which is under Ukrainian command. They are due to arrive there today.

Ukrainian soldiers guarding Mariupol said Russian shelling resumed late Sunday as soon as the civilians had evacuated. It was not immediately clear on Monday morning  whether the ceasefire was holding to allow more civilians to make their way out. Some 900 are thought to remain in Azovstal’s underground bomb shelters.

Russian shelling killed several civilians on Monday in the wider Donetsk region and neighbouring Luhansk, and even struck a village 35 miles to the west of Zaporizhzhia, where the evacuees are heading, killing two.

‘Several dozen small children are still in the bunkers underneath the plant,’ Shlega said. ‘We need one or two more rounds of evacuation.’ 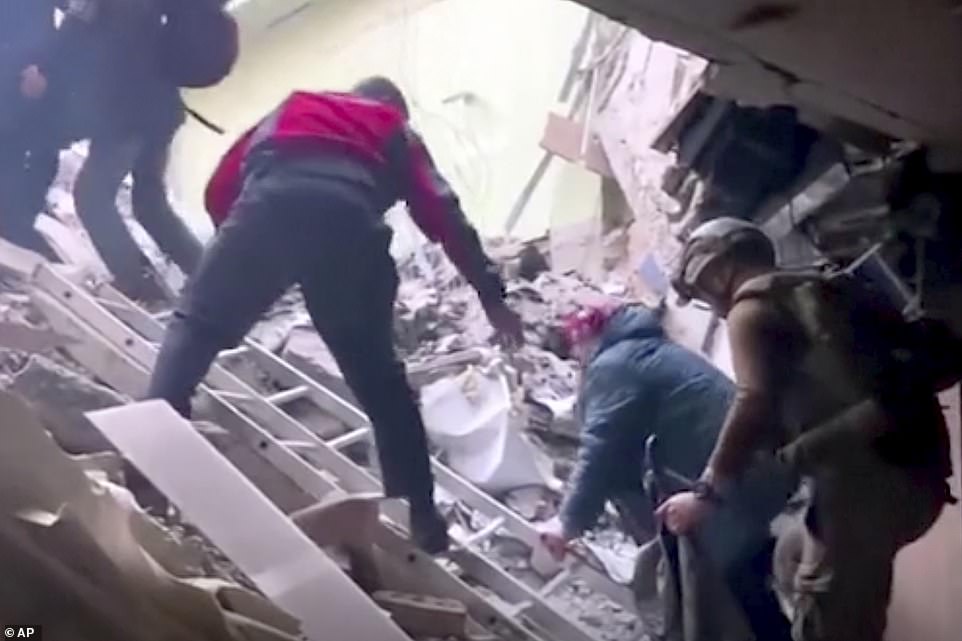 Red Cross workers and Ukrainian soldiers help civilians to evacuate from the Azovstal steel works in the besieged city of Mariupol some time during the last 48 hours, while a ceasefire was in place 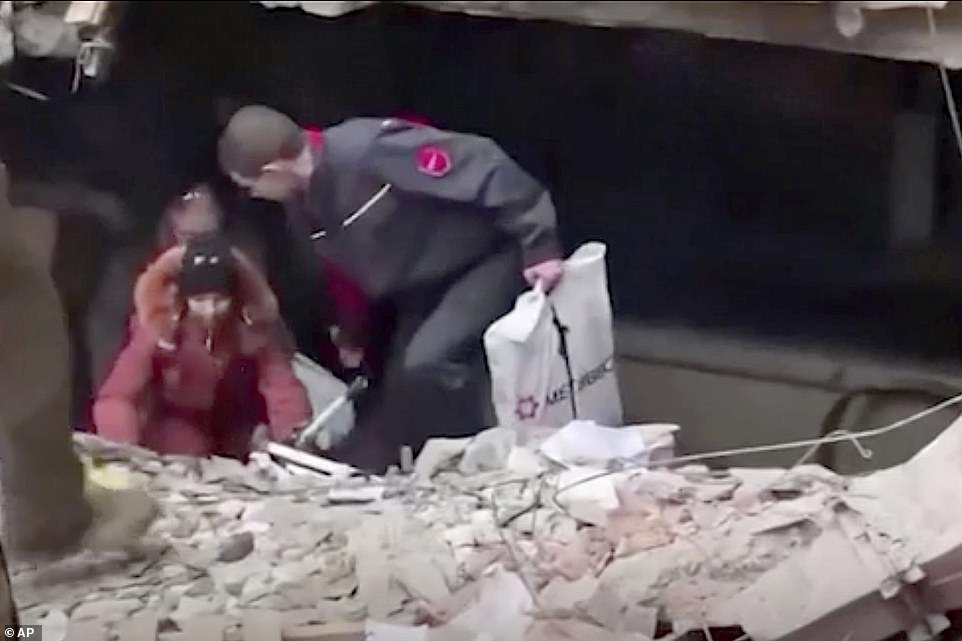 President Zelensky said more than 100 women and children were able to get to safety during the evacuation, which is the first to have taken place from Azovstal during a weeks-long siege of the plant 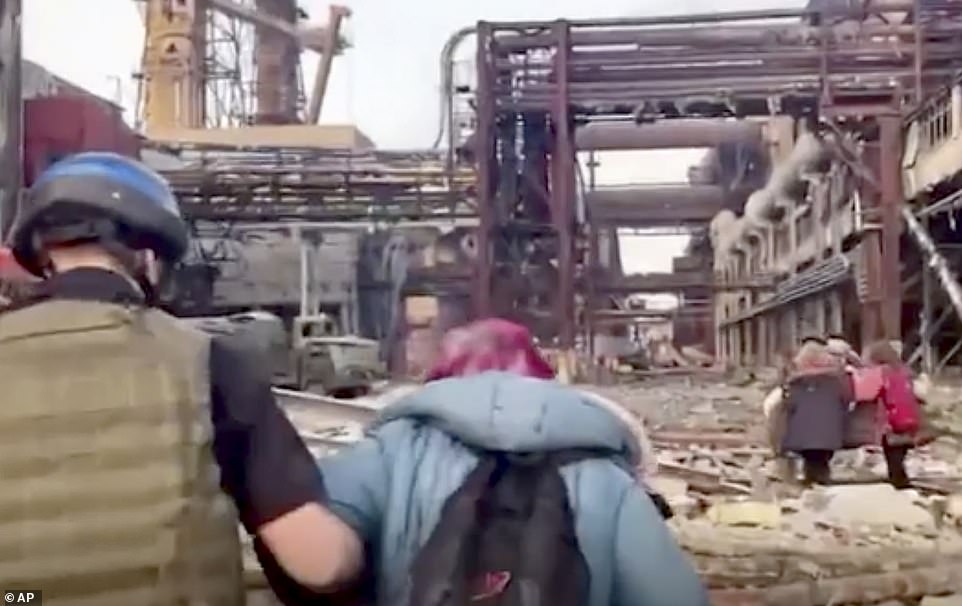 Women are helped across a bombed-out wasteland in Azovstal as they make their way to a convoy of coaches waiting to carry them out of the city of Mariupol, which has been under siege for more than two months 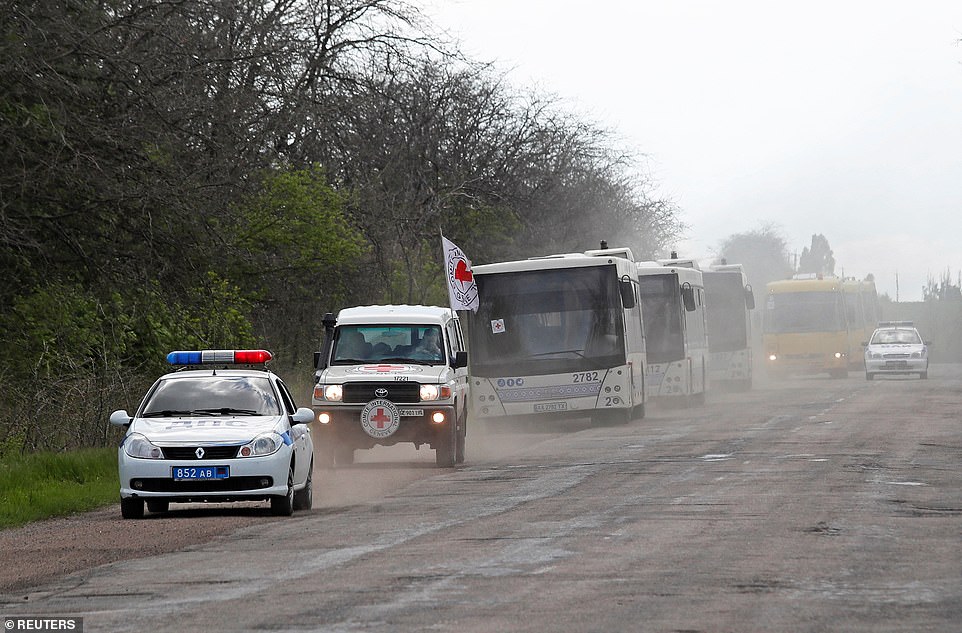 A Red Cross convoy carrying evacuees from Mariupol, including civilians from Azovstal, is seen driving along a highway leading from the Donetsk region to the Ukrainian-controlled city of Zaporizhzhia 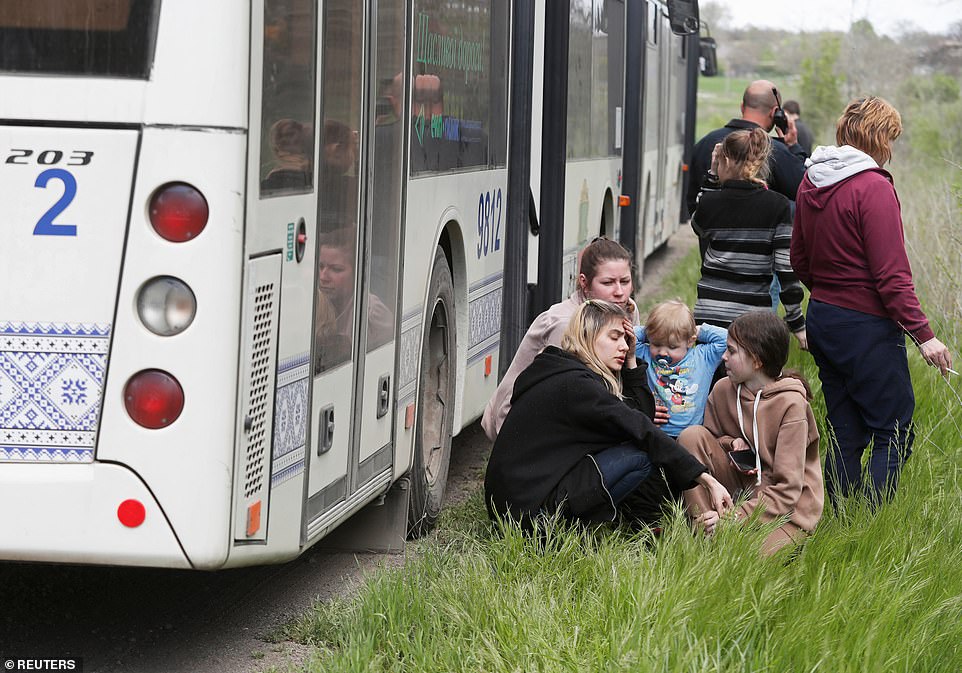 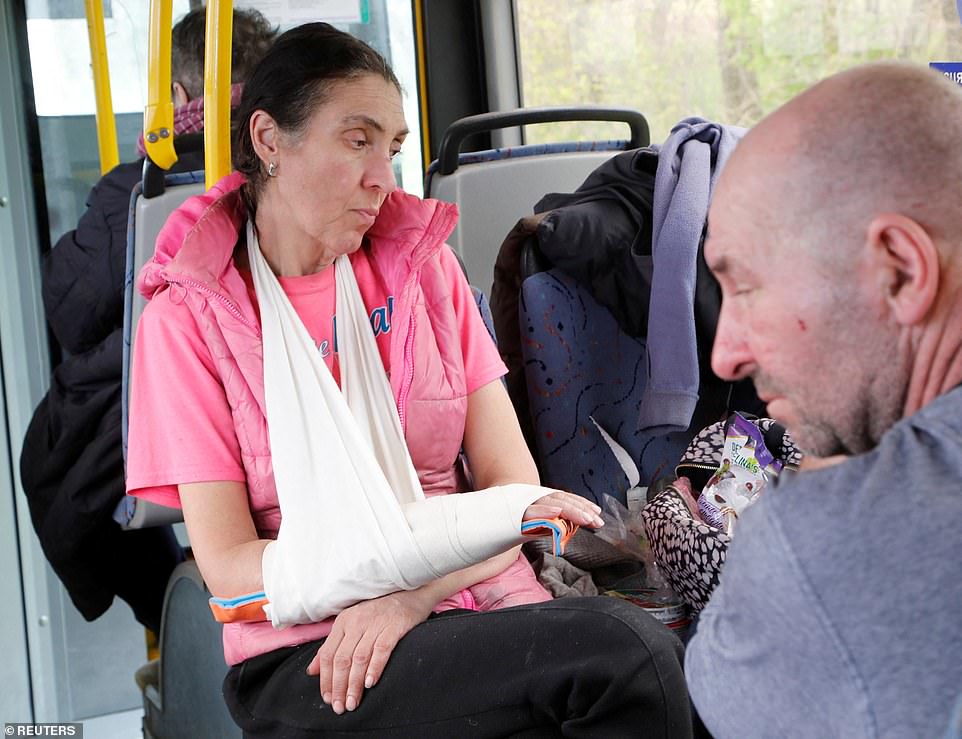 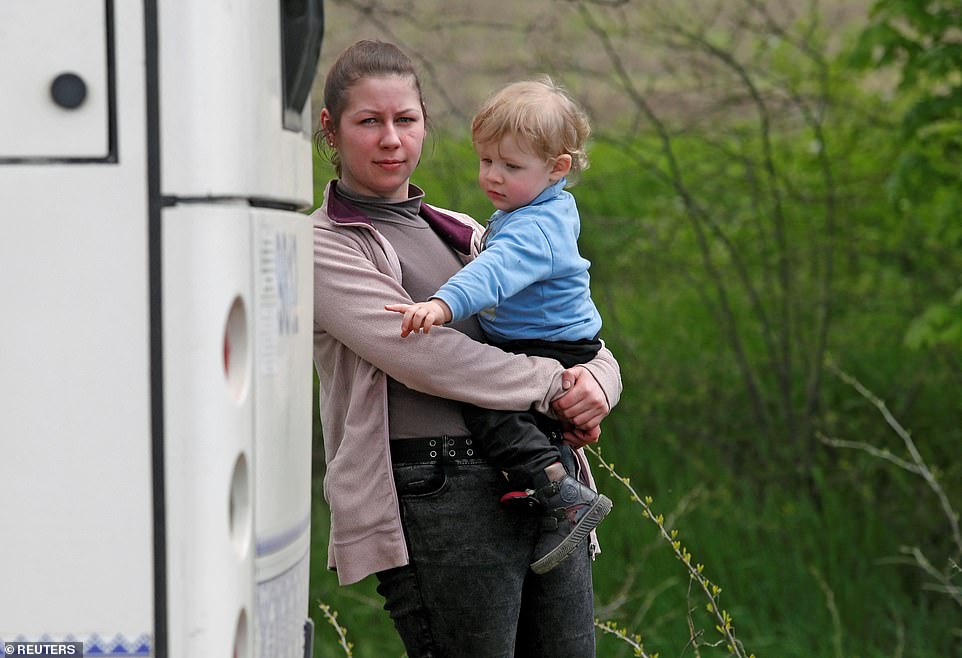 A woman holds a child next to a bus as civilians from Mariupol, including evacuees from Azovstal steel plant, travel in a convoy to Zaporizhzhia 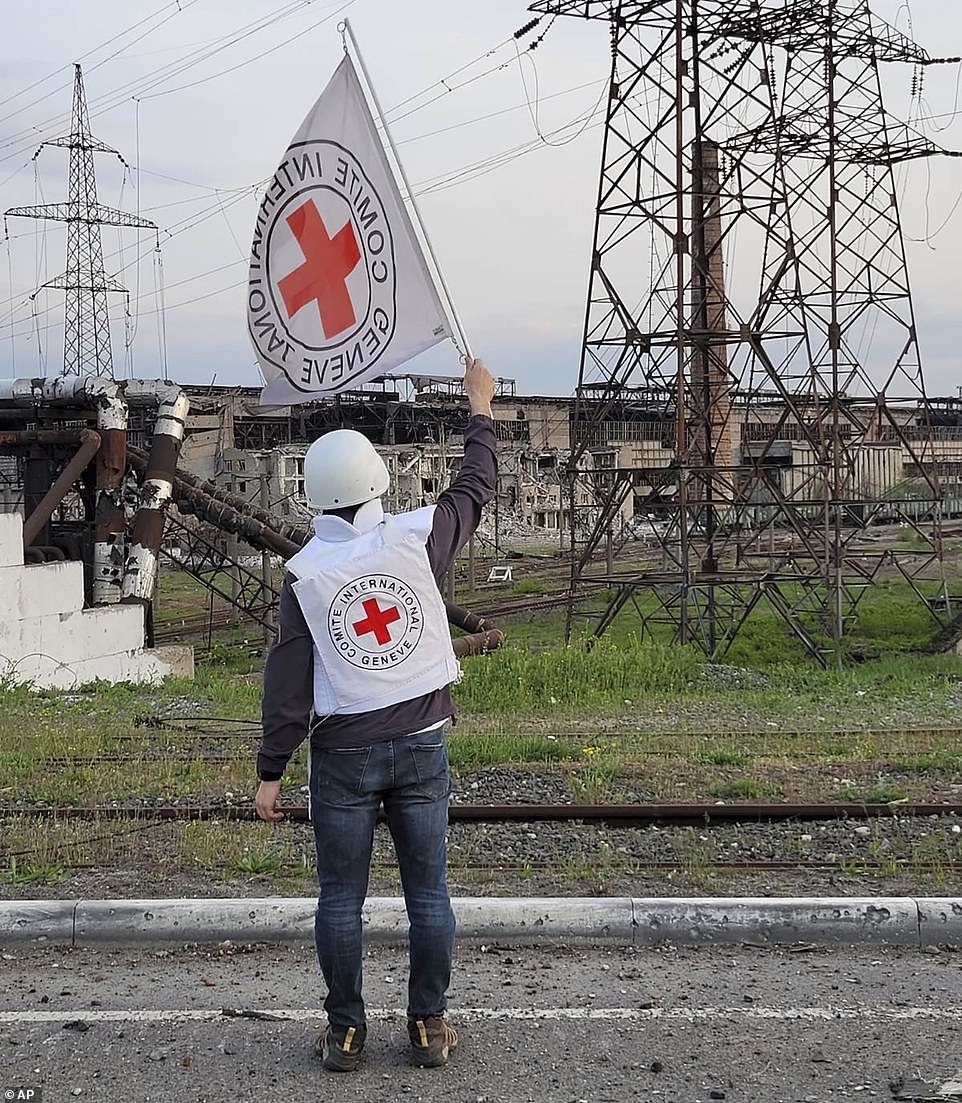 Mariupol’s city council said that attempts to evacuate people from various areas of the city would resume this morning, without saying where exactly the evacuations would take place. It is thought there are tens of thousands of civilians still trapped in the city, which had a pre-war population of 400,000.

Only civilians are being evacuated from the steel works, despite Ukrainian calls for the plant’s last defenders to be allowed safe passage out of the city as well.

People still stuck there were running out of water, food and medicine as Russian forces hemmed them into the industrial complex, whose network of bunkers and tunnels has provided shelter from weeks of Russian bombardment.

Around 100 civilians evacuated from the Azovstal steelworks were due to arrive in the Ukrainian-held city of Zaporizhzhia, 230 km northwest of Mariupol, on Monday morning.

‘For the first time, we had two days of a ceasefire on this territory, and we managed to take out more than 100 civilians – women, children,’ President Volodymyr Zelenskiy said in a nightly video address.

Footage from inside the steelworks showed members of the Azov regiment helping civilians though rubble and on to a bus. But hundreds of civilians remain trapped inside.

One older evacuee accompanied by young children said survivors were fast running out of food.

‘Children always wanted to eat. You know, adults can wait,’ she said.

Russia last week said it had decided against storming the steel works and would instead blockade it. But sporadic bombardments have continued.

The International Committee of the Red Cross said it was taking part in the evacuation operation along with the United Nations and Ukrainian and Russian officials but the situation was complex.

More than 50 civilians arrived at a temporary accommodation centre in Russian-controlled territory on Sunday after escaping from Mariupol, a Reuters photographer said.

Meanwhile, energy ministers from EU countries were due to hold emergency talks to plan a response to Moscow’s demand that European buyers pay for Russian gas in roubles or face their supply being cut off.

While the EU has imposed heavy economic sanctions on Russia in response to its invasion of Ukraine, the issue of Russian energy supplies has posed a dilemma that threatens to crack the united front.

The Russian military is now focusing on crushing resistance in Ukraine’s south and east after failing to capture Kyiv in the early weeks of the war, now in its third month.

Its assaults have flattened cities, killed thousands of civilians and forced more than 5 million people to flee the country. Mariupol, on the Sea of Azov, has become emblematic of the brutality of the war and the suffering of ordinary people.

Russian President Vladimir Putin’s forces are now in control of nearly all the city, linking up Russian-held territory to the west and east.

Moscow calls its actions a ‘special military operation’ to disarm Ukraine and rid it of anti-Russian nationalism fomented by the West. Ukraine and the West say Russia launched an unprovoked war of aggression that threatens to spiral into a much wider conflict.

Russian Foreign Minister Sergei Lavrov said on Sunday Moscow only wanted to guarantee the security of pro-Russian Ukrainians in the east and was not demanding that Zelenskiy ‘give himself up’ as a condition for peace.

‘We are demanding that he issue an order to release civilians and stop resistance. Our aim does not include regime change in Ukraine,’ Lavrov said in an interview published on his ministry’s website.

Ukraine’s military said on Monday Russian forces were trying to take over the eastern town of Rubizhne and prepare an assault on Sievierodonetsk. Further east, Dnipro Governor Valentyn Reznichenko said a Russian missile hit a grain silo, but caused no casualties.

Luhansk region Governor Serhiy Gaidai said three people had been killed by shelling over the past 24 hours.

Two explosions took place early on Monday in Belgorod, the southern Russian region bordering Ukraine, regional governor Vyacheslav Gladkov said. The cause of the blasts was not immediately clear but the Kremlin has accused Ukraine of making cross-border attacks. Gladkov said there were no casualties or damage.

Moscow is pushing for complete control of the Donbas region, where Russian-backed separatists already controlled parts of Luhansk and Donetsk provinces before the invasion.

In Brussels, EU energy ministers were due to meet in a bid find a way out of the dilemma posed by Russian energy supplies, which count for 40% of EU gas and 26% of its oil imports.

Germany and others have so far resisted calls for an abrupt halt to Russian fuel imports for fear of economic damage, while Moscow is demanding that European buyers pay for Russian gas in roubles or face their supply being cut off.

Russia halted gas supplies to Bulgaria and Poland last week after they refused to meet its demand to effectively pay in roubles.

With many European companies facing gas payment deadlines later this month, EU states must clarify whether companies can keep buying the fuel without breaching the EU’s sanctions against Russia.

Payments in roubles can help to shelter Russia’s economy from the impact of sanctions, while the fuel revenues can help finance its military operation. Diplomats said the EU is edging towards a ban on imports of Russian oil by the end of the year.

German Economy Minister Robert Habeck said on Monday that some countries were not yet ready for an embargo of Russian oil. Germany did not want to trigger an economic catastrophe, he said. 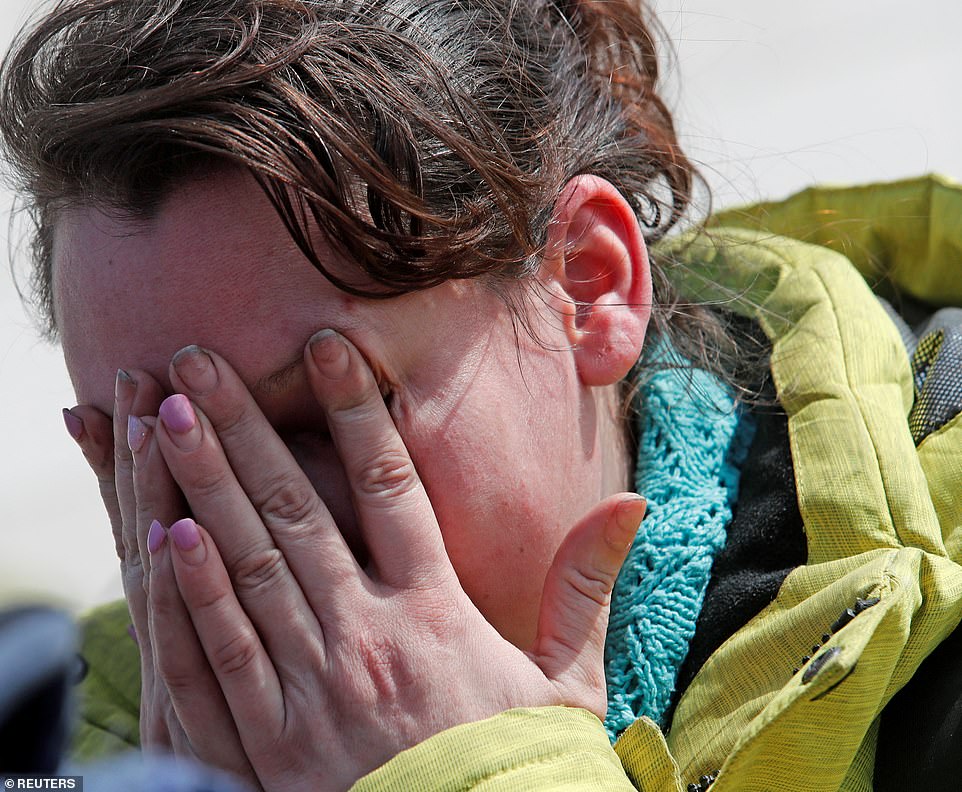 Natalia Usmanova, 37, bursts into tears on arrival at the temporary accommodation centre in the village of Bezimenne today (pictured) 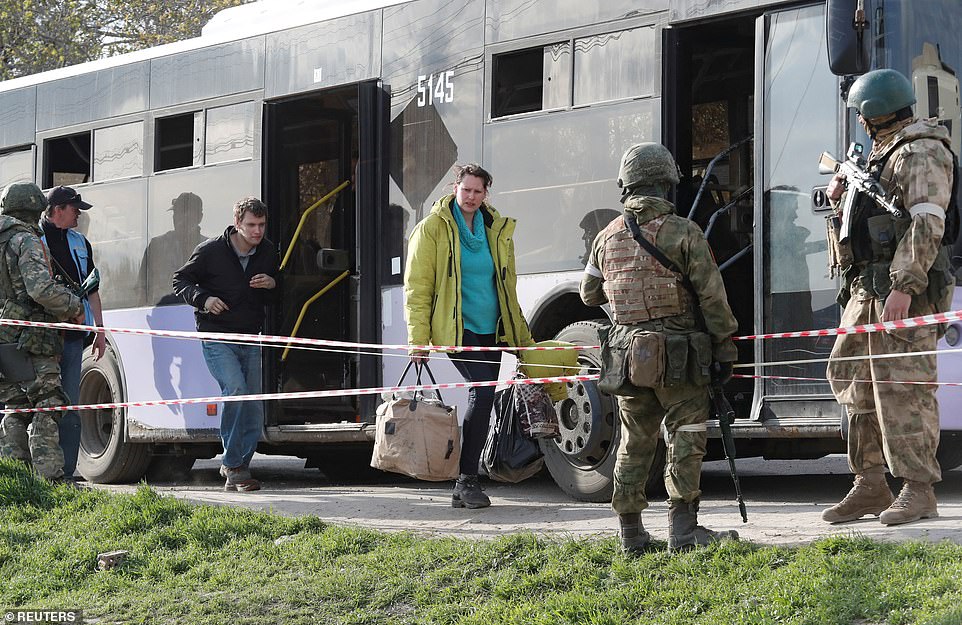 Steel plant employee Natalia Usmanova, 37, who was evacuated from Mariupol, arrives at a temporary accommodation centre in Bezimenne today (pictured) 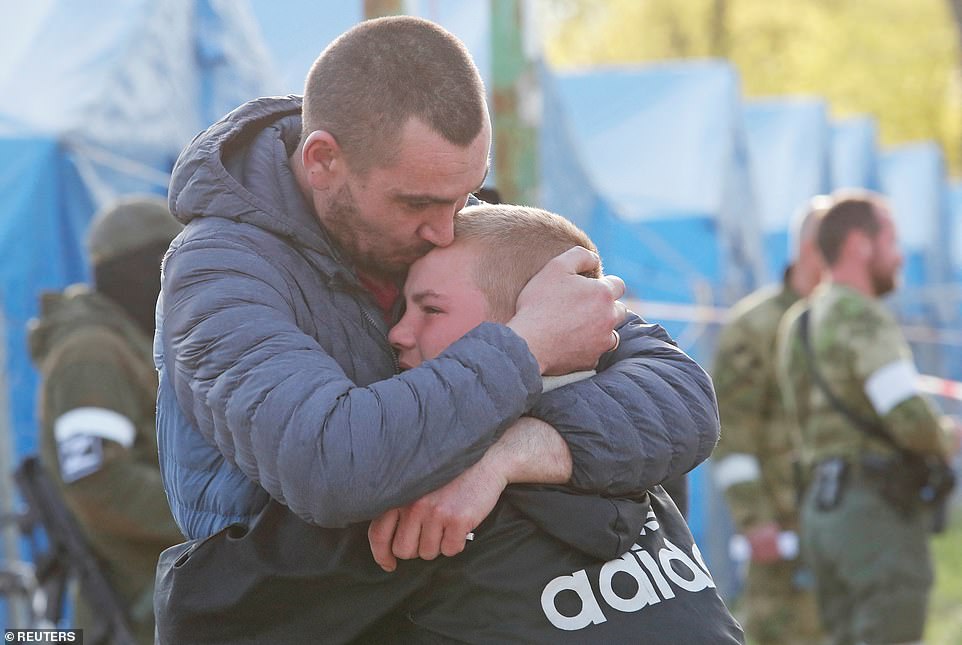 Azovstal steel plant employee Maxim, evacuated from Mariupol, hugs his son Matvey, who had earlier left the city with his relatives, as they meet at a temporary accommodation centre in the village of Bezimenne today (pictured) 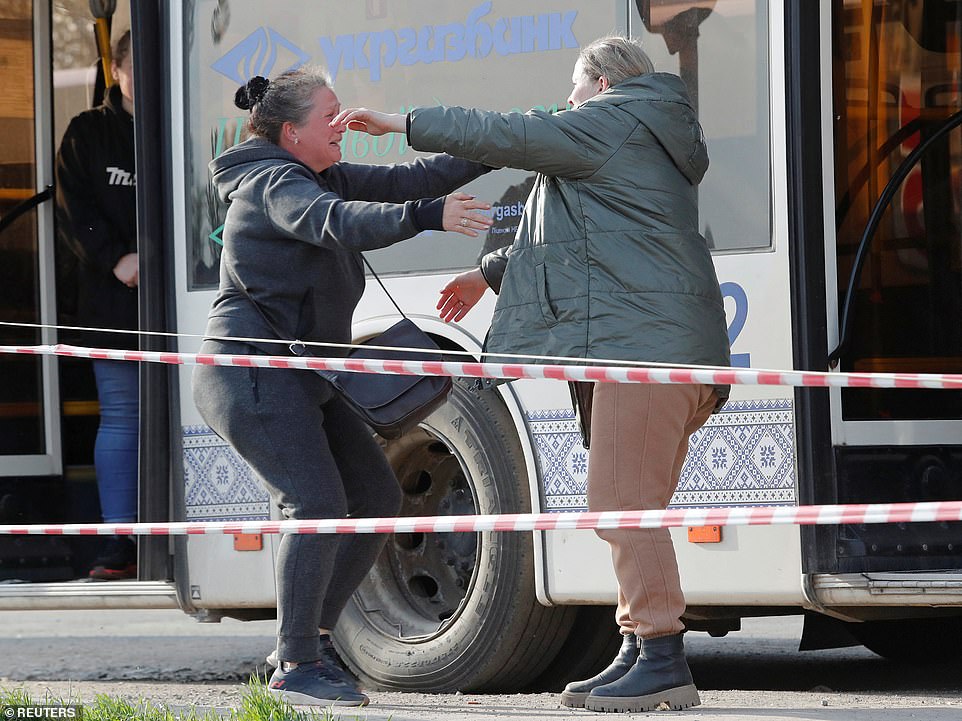 Valeria (right), evacuated from Mariupol, hugs her sister Aleksandra as they meet at a temporary accommodation centre during Ukraine-Russia conflict in the village of Bezimenne (pictured) 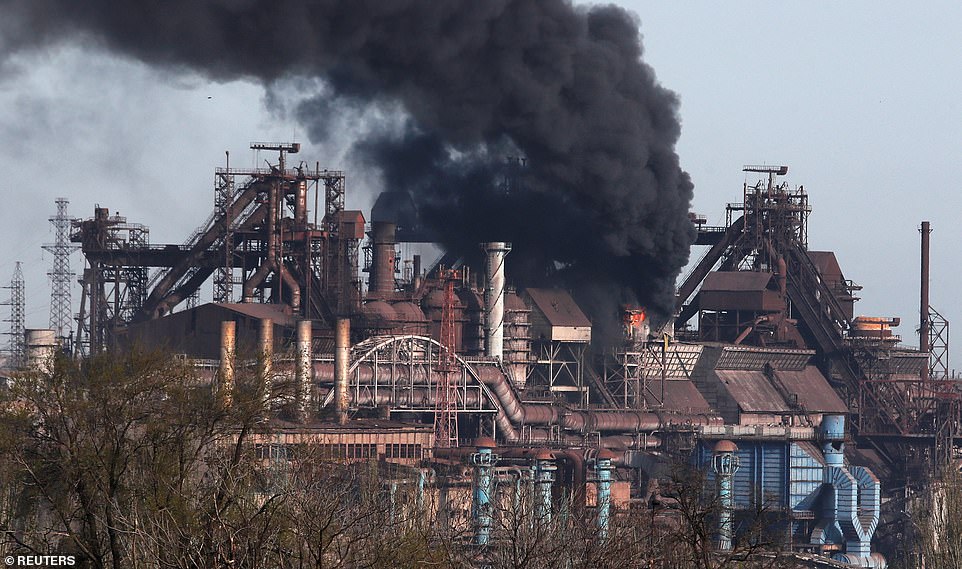 The desperate plea came as an aide to the mayor of Mariupol, who said Russian forces had renewed their attacks on the Azovstal steel plant on Wednesday. Pictured: Smoke rises above the Azovstal Iron and Steel Works in Mariupol on April 25