Former chief executive of the embattled Star casino Matt Bekier has blamed his senior executive team for letting him down and giving way to the “dark art” of VIP gambling, but said the casino’s failings were ultimately his responsibility.

Less than two months after resigning amid revelations of money laundering, criminal infiltration and fraud at the casino, Bekier said he was proud of what he achieved in more than seven years as chief executive.

In his first day of evidence to the royal commission-style inquiry examining The Star’s casino licence, Bekier said he believed the culture of the company at large was good, but there was “a subculture that has let us down”. 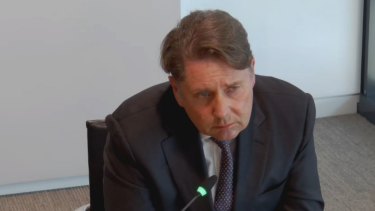 Matt Bekier giving evidence on May 2.

“The dark art of acquiring customers, to convince them to fly long range and gamble in our casinos … settle and collect the money. That’s very different from the rest of our business”.

Bekier said he resigned in late-March because he was accountable for the good and the bad.

He agreed that the VIP area of the casino presented the greatest risks in terms of money laundering and terrorism financing, yet it was where the business fundamentally “dropped the ball”.

“When it came to the VIP-related matters … I had a failure of the first and the second line of defence,” he said.

Counsel assisting the inquiry Naomi Sharp, SC, asked Bekier who had let him down, asking him to assess former colleagues who have already given evidence.

Bekier singled out chief legal and risk officer Paula Martin, saying she was “extremely talented” but that she tried to solve problems herself, instead of escalating them.

Of general counsel Oliver White, the former casino boss said he was “very sad” to learn things White had discussed.

“I trusted him and he would have had the currency to come to me and escalate any problem to me and I would have listened,” Bekier said.

At the centre of the inquiry has been the use of Chinese debit cards for gambling transactions, despite the practice being strictly prohibited.

It has previously heard evidence The Star disguised $900 million of gaming transactions as hotel expenses and lied to banks in an attempt to conceal the fraud. 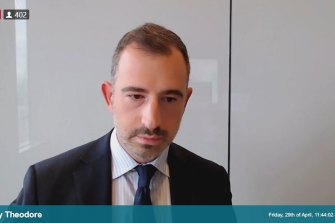 Earlier, chief financial officer Harry Theodore gave evidence that he acted unethically when overseeing correspondence that disguised the transactions, admitting it was a failure of his leadership.

“I accept that allowing the communications which I approved to be sent was improper … it wasn’t ethical conduct,” he said.

Bekier on Monday conceded the casino agreed to allow the use of China UnionPay cards as far back as 2014 because “everybody else was doing it,” in a reference to Crown.

“The Chinese government didn’t want the cards to be used for gaming. And we did it regardless,” he said.

The review, before Adam Bell, SC, has also heard evidence about a notorious Chinese “junket” operator with alleged links to organised crime, which ran a private gaming suite where money was allegedly laundered in bags and suitcases.

Asked about the private room operated by Suncity, Bekier conceded The Star had allowed behaviour “that was in contravention of all rules and regulations that we operated under”.

Bekier agreed there was an unacceptable risk that money laundering was happening in the room, but said he believed at the time there were appropriate checks of its junket business partners.

The inquiry previously heard Bekier had furiously challenged the findings of a 2018 KPMG report that warned the casino it was failing to tackle money laundering.

He denied on Monday that he sought to persuade the KPMG partners they had made mistakes in their report, but said it was “possible” he had flipped through it during a meeting pointing out what he said were errors.

Bekier said he may have become “frustrated” during the meeting because KPMG would not explain the reasoning behind their findings and recommendations.

He said he was not aware of a practice at the casino to mark such documents as “legal privilege” to resist providing copies to the regulator.

“[That’s] certainly not something I would have condoned.”

Monday marked a second gruelling day in the witness box for Theodore, who last week said he would consider his position at The Star once his evidence was complete.

Under tense examination from Sharp, the chief financial officer was repeatedly accused of giving false evidence, at one stage describing a claim by Theodore as “a load of rubbish”.

Sharp suggested he had allowed correspondence to be sent to the National Australia Bank that falsely claimed debit cards were not used for gambling.

When pushed, Theodore agreed that the casino’s representations to NAB and China UnionPay were inappropriate and unethical.