Four in 10 Covid cases are asymptomatic and pregnant women are most likely to be ‘silent carriers’, major study of 30m people finds

Forty per cent of people infected with Covid do not have any symptoms, a major study of 30million people has found.

It was previously thought that around 20 per cent of Covid carriers were asymptomatic, which has made it difficult to keep a lid on outbreaks even with mass testing.

But a new international review of nearly 100 studies found 40.5 per cent may actually be ‘silent carriers’.

The studies were done in the first year of the pandemic, when either the original virus or Alpha variant were dominant worldwide.

The review, by researchers at Peking University in Beijing, found asymptomatic cases are most common among pregnant women, with 54 per cent showing no signs of illness. But the researchers did not speculate why this was the case.

The team wrote that the high rate of asymptomatic cases ‘highlights the potential transmission risk’ the so-called silent spreaders pose.

They can only be identified through ‘extensive’ testing and close contact tracing, the researchers said.

Asymptomatic infections are those who do not feel unwell despite being infected, meaning they are likely to spread the virus as they continue to interact with others.

Covid’s main symptoms are a fever, cough and change to taste or smell, according to the NHS.

But experts warn that the symptoms are more wide-ranging and have become more mild and cold-like as Omicron cases surge across the UK, which could be further fuelling its spread. 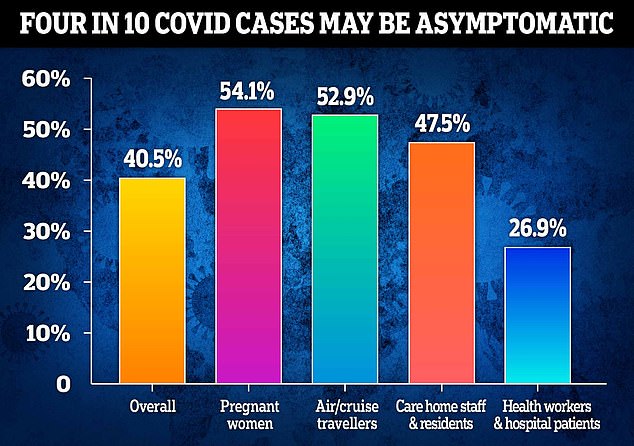 Researchers at Peking University in Beijing identified 95 studies which included 29.7million people who had been tested for Covid. Among those who went on to test positive, 40.5 per cent had no symptoms (yellow bar). And the figure was higher for pregnant women (red bar), air or cruise travellers (green bar) and care home residents and staff (orange bar), while it was lower among health workers and hospital patients (blue bar) 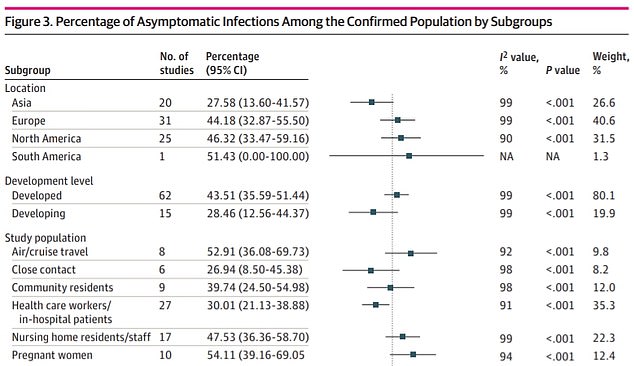 The team found 40.5 per cent of those who test positive for the virus have no symptoms. The graph shows the percentage of asymptomatic infections among different groups. Groups where the black square is to the right of the vertical line signal a higher than average rate of asymptomatic infection. This was seen among people from Europe, the US, developed nations, travellers, care home residents and staff, pregnant women and young people 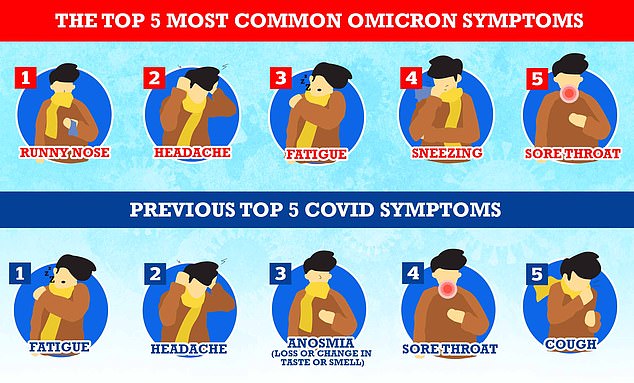 Reports from the UK’s Covid symptom tracking study indicate Omicron cases are triggering cold-like health problems like a runny nose and sneezing, as opposed to traditional signs of the virus from earlier in the pandemic, like a persistent cough

They identified 95 studies which included 29.7million people who had been tested for Covid.

Their paper, published in the journal JAMA Network Open, found 0.25 per cent of all those swabbed had no symptoms.

The rate of asymptomatic cases was higher among case home resistance and staff (4.5 per cent), air or cruise travellers (2 per cent) and pregnant women (2.34 per cent).

The main symptoms of coronavirus are:

But among those who went on to test positive, 40.5 per cent had no symptoms.

The researchers said more asymptomatic cases may be recorded among care home residents because more studies were conducted among the group, meaning they were more likely to be tested.

As more countries conduct enhanced testing, studies will increasingly find that there are more asymptomatic cases among other groups, they said.

The high rate among holidaying people suggests screening and quarantining them when they arrive at airports is ‘important for reducing community transmissions, especially in countries without local transmission,’ the team wrote.

Less asymptomatic cases were spotted among healthcare workers and hospital in-patients (30 per cent) and close contacts of infected individuals (26.9 per cent).

Health staff without symptoms could ‘contribute to disease spread in and out of hospitals’ so testing them is important for infection control, the researchers wrote.

And the rate of asymptomatic cases varied between different parts of the world, with nearly half of those infected in the US not having any symptoms (46.3 per cent), compared to 44.2 per cent in Europe and 27.6 per cent in Asia.

The researchers said the asymptomatic infection rate was higher in more developed countries, younger people and in papers published by June.

In studies looking at infections among under-20s, 60.2 per cent of cases were asymptomatic, while nearly half of 20 to 39-year-olds had no symptoms.

The team wrote that people without symptoms can infect others, with previous studies showing that the viral load — the amount of virus in a person’s nose and throat swab — among asymptomatic people was similar to those among infected people.

And other studies have shown those without symptoms can fuel outbreaks within their homes and other settings.

They wrote: ‘Asymptomatic infections should be considered a source of Covid infections that play an important role in the spread of the virus within community as public life gradually returns to normal.

‘The management of asymptomatic carriers was essential for preventing cluster outbreaks and transmission within a community.’