Heading out for supermarket supplies, she could be any unassuming shopper.

But the woman behind the facemask is Janet Leach, the one-time confidante of serial killer Fred West.

As the 65-year-old was spotting out in Gloucester last week, police a few miles away were searching The Clean Plate Cafe for the body of Mary Bastholm – believed to be another of West’s victims.

Mary, who was 15, vanished in 1968 and was among up to 20 people that West allegedly confessed to Ms Leach that he killed – in addition to the 12 whose murders he was charged with.

Ms Leach was a trainee social worker when she was assigned as West’s ‘appropriate adult’ during police interviews and visits to his now-infamous home in Cromwell Street.

Janet Leach, 65, (pictured) the confidante of serial killer Fred West, was spotted in Gloucester last week, while police were searching The Clean Plate Cafe for the body of Mary Bastholm

Her relationship with West was the subject of an ITV drama called Appropriate Adult in 2011, starring Dominic West and Emily Watson, but Ms Leach has not been photographed for nearly 20 years as she quietly vanished into obscurity.

Located by The Mail on Sunday last week, the mother-of-five declined to comment.

A neighbour in the Gloucester suburb where she lives said: ‘She’s quite reclusive. She doesn’t work any more and lives alone.’

Ms Leach had four sons by ex-husband Barry Leach – as well as a daughter from another relationship – but they divorced before she met West.

She has suffered a series of setbacks since selling her story. Her next partner, a plasterer, died in 1999 and she went on to marry a retired lorry driver. He passed away a decade ago, before they had even celebrated their first anniversary. 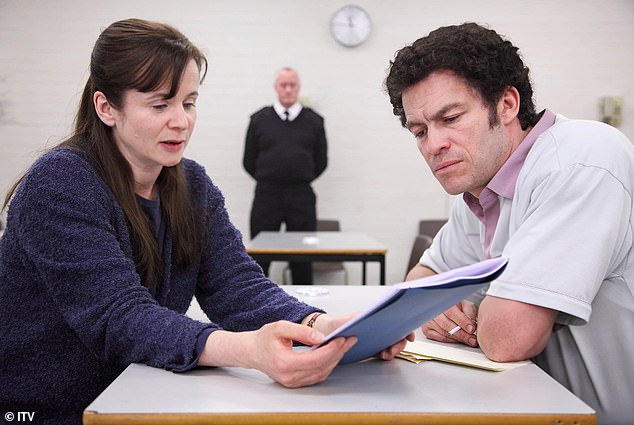 Ms Leach was assigned as West’s ‘appropriate adult’, and her relationship with him was subject of ITV drama Appropriate Adult in 2011, starring Dominic West and Emily Watson (pictured)

Her eldest son Paul has been publicly critical of his mother, claiming her relationship with West ruined his life.

Police were this weekend continuing their search of the cafe – called the Pop-In in 1968 – which was a known haunt of West and where Mary worked as a waitress.

Forensic archaeologists and detectives are assessing whether to launch major excavation works tomorrow.

Mary was last seen waiting for a bus and there are suspicions that West may have stopped to give her a lift before killing her.

The new investigation was launched after a TV crew took a cadaver dog into the cafe and it picked up a scent in the basement.

West reportedly confessed Mary’s murder to Mrs Leach but in official interviews denied any involvement. He was 53 when he took his own life on New Year’s Day 1995 while awaiting trial for 12 murders.

His wife, Rose, now 67, was given a life tariff after being found guilty of ten murders.