New York: A 1949 self-portrait by Mexican painter Frida Kahlo has sold for $US34.9 million ($48 million) at Sotheby’s New York, setting a record for the artist and for Latin American art at auction.

The work, titled Diego y yo (Diego and I) carried a presale estimate of $US30 million to $US50 million and was guaranteed by a third party, meaning the auction house had lined up a buyer willing to pay a minimum amount before the sale even began. 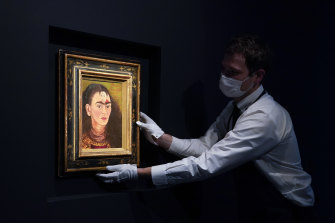 Given those arrangements, there was never a doubt, as bidding started, that the work would easily clear Kahlo’s previous record at auction, set in 2016 when a 1939 painting of two women on the edge of a jungle sold for $US8 million at Christie’s in New York.

Kahlo, who died in 1954 at just 47, is one of the world’s most famous, least-prolific artists.

She only made about 140 paintings, according to her catalogue raisonné, making Diego y yo a rare opportunity for collectors to acquire her work.

The small painting, about just 30 centimetres high, had been out of the public eye for more than 30 years; it last came to at auction in 1990, when it sold for $US1.43 million at Sotheby’s New York.

The New York Times said it was a new high for a Latin American artist at auction, surpassing a work by Kahlo’s husband, Diego Rivera, which sold for $US9.76 million in 2018.