Home » From the Archives, 1981: The fuss about the Royal finger

The fuss about the Royal finger 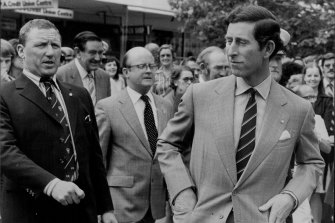 Prince Charles during his visit to Canberra in 1981.Credit:Kenneth Stevens

CANBERRA — The British Press had Prince Charles in rather narrow focus as he toured Canberra yesterday. The reporters were watching the little finger on his left hand.

The Prince had told them at an off-the-record meeting on Sunday that his finger was sore and swollen and that he could not take off his gold signet ring. He thought he must have hurt his finger when he fell from his horse in England on 13 March. So he was being careful to avoid any left-handed handshakes.

That private conversation became news when one reporter, not at the meeting, but who heard of the details afterwards, decided to file a report to a Sydney paper. (The curious convention of an off-the-record meeting is that you cannot report it if you are there, but you can if you hear about it afterwards).

After that, the field was open. London papers were sent details of the Prince’s pain and close-up photographs of the swollen knuckle. 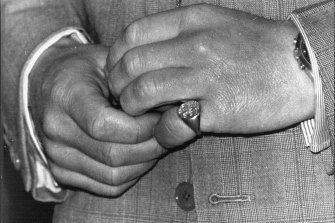 All this may seem an inordinate amount of fuss about a finger, even a Royal one. But the British Press have been having a lean time so far on the Royal tour.

More than 30 British reporters, presumably fired by the prospect of a Royal wedding, have been with the Prince since he reached New Zealand two weeks ago. On the trail are writers and photographers representing all the London dailies; Royal expert Anthony Holden of the London ‘Observer’, who has written a biography of Prince Charles and who tips him as the next Governor-General of Australia; and two reporters who are writing hooks on his romance with Lady Diana Spencer.

A Royal tour includes a whole string of engagements which, important as they are, do not make front page news on the other side of the world. So the Press people have been reduced to concentrating on Lady Diana lookalikes in Wellington and an injured finger in Canberra.

Now and then a photographer asks once too often for a picture, or commits some breach of taste, as when Prince Charles was photographed alongside someone in a T-shirt labelled “I’m with Stupid”. After such moments, the Prince lets it be known that he is somewhat displeased.

On the whole, though, Prince and Press behave in a co-operative and gentlemanly way towards each other.

Yesterday the Prince visited the Australian War Memorial to open the Hall of Valour, a new exhibition with the world’s largest single collection of Victoria Crosses: 27 of the 96 VCs awarded to Australians are included in this display.

A small note of dissent and a large welcome awaited him later when he walked through Canberra Civic Centre on his way to the national headquarters of the Bible society.

About 10 demonstrators from the People Under Poverty group slowly beat a drum and held up banners with such slogans as Jobs not Princes, and Anarchy for the UK. Australia.

A lone heckler shouted: “Down with royalty, off with his head,” until police rushed him away,