A fresh diplomatic row erupted yesterday over another comedy sketch on ABC television — this time involving the Soviet Union.

The Soviet embassy lodged a formal diplomatic protest and hinted at possible trade sanctions over a parody of the Soviet leadership on ABC-TV’s ‘The Dingo Principle’ on Monday night. 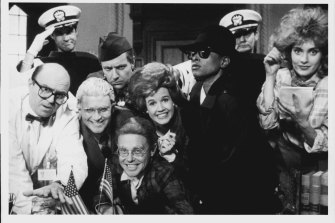 The cast of ‘The Dingo Principle’ from the skit ‘Inside the Oval Office’.Credit:Australian Broadcasting Corporation

An item on the same program just two weeks ago angered the Iranian Government and led to the expulsion of two Australian diplomats from Teheran.

The item, with a ‘Rocky Horror Show’ theme, featured a resurrected Lenin dancing and singing while Mr Gorbachev played piano and sang an irreverent song.

The show includes several skits based on May Day celebrations in the Soviet Union, comparing contemporary Russian society with that during the Russian revolution. In one scene, a confused and somewhat senile World War II veteran says that if Lenin was “still around … he’d be 150 years old, but once a bastard always a bastard”.

In another scene, a delegate at the general meeting of the ‘International Communist Conspiracy Party’ refers to Mr Gorbachev as a “wimp”. “Gorbachev, that wimp, the Western press treats him like Elton John,” the delegate says.

The Soviet embassy has requested instructions from Moscow on possible further reaction. Soviet officials suggested trade sanctions were possible and hinted in particular at Australia’s wheat exports, worth about $200 million this year.

It is expected that the Soviets will protest directly to the ABC management tomorrow. Both the Foreign Affairs Department and the ABC have defended the program’s independence and right to free expression.

But Mr Belobrov said the ABC had committed “an extremely unfriendly act” against the Soviet Union, and the Federal Government was accountable.

“It was a vicious attack on the present leadership and the founder of our nation,” Mr Belobrov said in an interview with ‘The Age’. “It was absolutely outrageous.

“There have been other insults in the media in the past, but this was far worse. We cannot let it pass and we believe the Government has a responsibility.”

Mr Belobrov said the Soviet Union could not accept it when its society and values were attacked “in such a disgraceful way” —even in a satirical context.

“We have a great tradition of satire in our own country, but there is a clear difference between what is humour and what is mockery,” he said.

A Foreign Affairs Department spokesman said last night that Mr Belobrov had been told by departmental officials that the Government “doesn’t have, nor seeks to have, control over the media”.

The spokesman said: “We explained to him the independence of the ABC, the tradition of political satire and that the Government accepts freedom of expression.”

A spokesman for the ABC said that no complaint had been received from the Soviets and any protest would be studied in detail.

But the spokesman defended the program’s independence. He said no action had been taken against the ‘Dingo Principle’ since the Iranian protest last week.

“The ABC is not setting out deliberately to cause affront to people,” he said.