Home » Furlough falls to lowest rate in 2021 as restaurants boom

Businesses bounce back: Furlough falls to its lowest rate in 2021 with just 8 per cent of workers still paid off as restaurants boom with more people eating out now than they did before the Covid pandemic began

Restaurants are experiencing a post-lockdown boom as socially starved Brits head out to eat and make merry.

New figures from the Office for National Statistics show that last week the UK’s eateries were operating at 132 per cent of the number of customers they were enjoying at the same time in 2019, before the pandemic began.

This week from May 17 to May 24 was the first full week of restaurants being allowed to open indoor tables, and the figure was also up 59 per cent on the previous week, when seating was outdoors-only.

At the same time, the number of workers at UK firms claiming furlough fell to 8 per cent –  or 2.2million people, its lowest rate this year and down two per cent on the previous week.

The stats for the week to May 24 show a welcome boost for the economy from Step 3 of the lockdown easing and will strengthen arguments for Step 4 to go ahead as planned in June.

The last time there was such a spike in eating out was during the Eat Out To Help Out scheme in August.

It came as a survey of London businesses fund almost three-quarters were planning a return to the office for staff in some form by September. 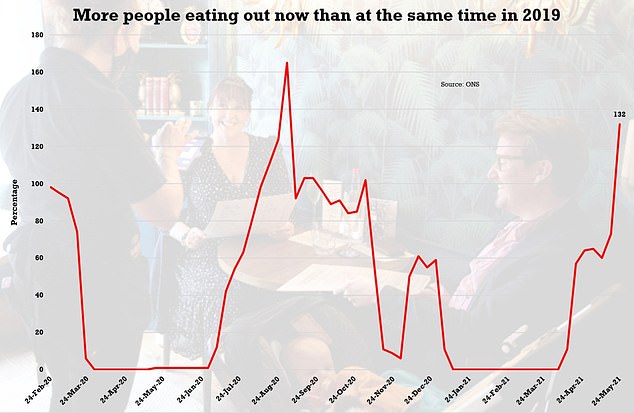 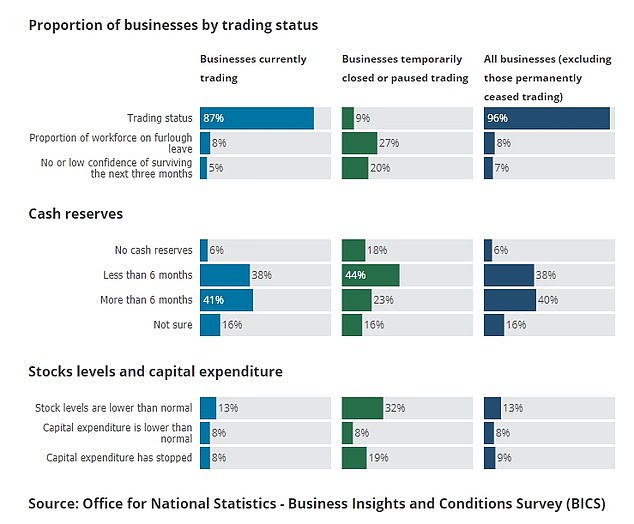 Taxi firm Addison Lee polled 142 businesses in the capital and 74 per cent confirmed they would be returning in the coming months –  with half of those planning to do so by the end of June.

In its report today the ONS noted: ‘This latest week’s substantial increase follows the reopening of indoor dining in England, Wales, and Scotland on 17 May 2021 and continues the rise in seated diner estimates observed since the first reopening of pubs and restaurants in England on 12 April 2021.

‘In the week ending 24 May 2021, the seven-day average estimate of seated diners in London saw a sizable increase of 41 percentage points to 84 per cent of its level in the equivalent week of 2019.

‘Meanwhile, the equivalent figure in Manchester was at 190 per cent, having increased 66 percentage points from the previous week.’

It came as one of the government’s top scientific advisers warned today that No10’s plan to ease all restrictions in England on June 21 hang ‘in the balance’ because of the Indian coronavirus variant.

‘Professor Lockdown’ Neil Ferguson, an Imperial College London epidemiologist and key member of SAGE, said the now dominant strain would trigger a ‘small third wave’ — but he said the next two or three weeks would be ‘critical’ in deciding whether it was safe to move to step four on the roadmap.

He told BBC Radio 4’s Today programme: ‘We’re still working to assess exactly how much more transmissible it is but it has gone from being a small minority to a majority variant and that’s clearly of concern. We know it partially evades the immunity generated by vaccines, thankfully if people have had two doses there’s still a large amount of immunity remaining but it’s not quite as much as before.

‘Step four is rather in the balance, the data collected in the next two or three weeks will be critical.’ He said by then ministers will be able ‘to come to a firm assessment of whether we can go forward’.

Professor Ferguson, whose grim modelling that hundreds of thousands of Brits could die without action prompted the first lockdown last March, said it was promising that infection levels were still low despite the new variant, with the latest ONS survey suggesting one in a thousand people in England are Covid positive.

He added: ‘The key issue on whether we can go forward is will the surge caused by the Indian variant – and we do think there will be a surge – be more than has been already planned in to the relaxation measures.

‘It was always expected that relaxation would lead to a surge in infections and to some extent a small third wave of transmission, that’s inevitable if you allow contact rates in the population to go up, even despite immunity. It’s just we can’t cope with that being too large.’

Asked whether he would advise Boris Johnson to continue with plans to unlock fully next month, Professor John Edmunds, from the London School of Hygiene and Tropical Medicine, answered ‘no’ because ‘at the moment it looks a little bit risky’.

He told ITV: ‘You know, the Indian variant is taking off in a number of places — not everywhere, but a number of places. Luckily we’ve still got low levels, but it is concerning. And we are still not back to normal. We measure people’s contact patterns and we’re still at less than half of our normal contact patterns at the moment. So I think that is helping to keep the lid on it, to some extent.’

NHS bosses have said the next seven days will be ‘crucial’ in assessing whether Covid jabs work, with all eyes on hospitalisation data as daily cases yesterday passed 3,000 for the first time in a month.