Fears over the end of furlough eased today as job vacancies hit another record high and payroll numbers rose.

Chancellor Rishi Sunak has hailed figures suggesting the closure of the massive bailout is being largely absorbed by the strong labour market.

The number of employees on payrolls hit 29.3million last month, up 160,000 on September – when furlough wound up.

However, there are concerns the relatively rosy picture masks worrying signs about inflation. Wages including bonuses were rising by 5.8 per cent annually – although the figures have been warped somewhat by the effects of the pandemic. 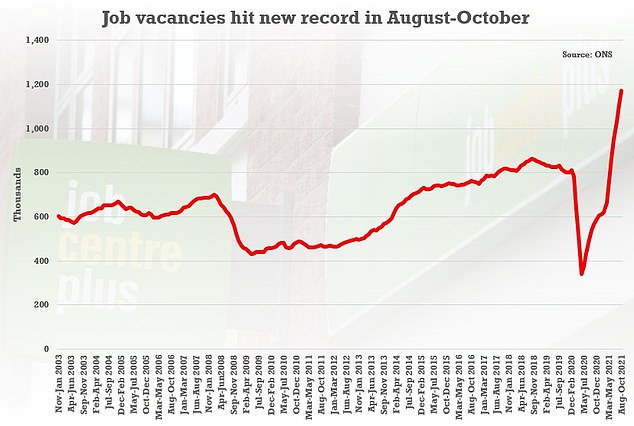 Mr Sunak said: ‘Today’s numbers are testament to the extraordinary success of the furlough scheme and welcome evidence that our Plan for Jobs has worked.

‘We know how vital keeping people in good jobs is, both for them and for our economy – which is why it’s fantastic to see the unemployment rate falling for 9 months in a row and record numbers of people moving into employment.’

ONS head of economic statistics Sam Beckett said: ‘It might take a few months to see the full impact of furlough coming to an end, as people who lost their jobs at the end of September could still be receiving redundancy pay.

‘However, October’s early estimate shows the number of people on the payroll rose strongly on the month and stands well above its pre-pandemic level.

‘There is also no sign of an upturn in redundancies, and businesses tell us that only a very small proportion of their previously furloughed staff have been laid off. In addition, vacancies again reached a new record high.’

Employment minister Mims Davies said: ‘With over 100,000 young people landing roles through the Kickstart scheme, more people on payrolls this quarter in all corners of the country, and unemployment continuing to fall, it is clear our Plan for Jobs is working.’ 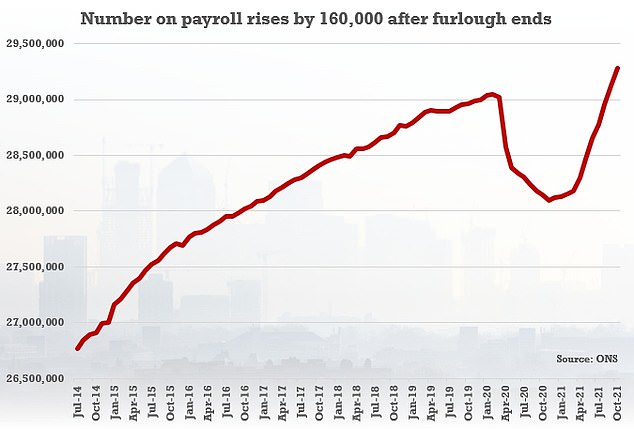 The number of employees on payrolls hit 29.3million last month, up 160,000 on September

Suren Thiru, head of economics at the British Chambers of Commerce, said: ‘The marked rise in payroll employment suggests that the end of furlough had little effect on the UK jobs market in October, as demand for labour continued to surge.

‘Record job vacancies suggest that the chronic staff shortages encountered by businesses are intensifying and this could derail the recovery by forcing firms into a more long-lasting decline in their operating capacity.

‘Although earnings growth remains elevated, achieving wage increases over a sustained period may prove challenging without a marked improvement in productivity and an easing of the cost pressures faced by firms.’