A gay wedding was broadcast for the first time on Songs of Praise yesterday.

The ceremony for Jamie Wallace, 27, and Ian McDowall, 39, took place at the Rutherglen United Reformed Church, near Glasgow. It is one of the few Christian denominations to allow same-sex marriage.

Such services are currently banned by the Church of England and the Church in Wales. 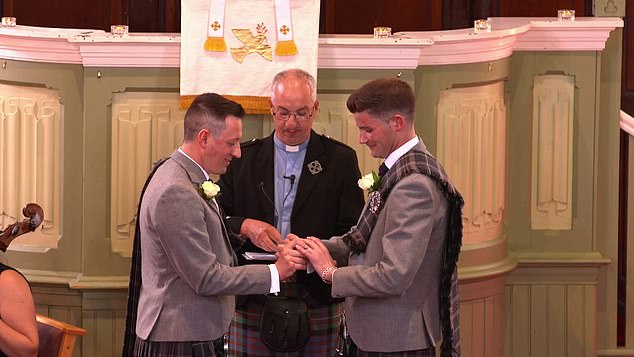 Mr Wallace and Mr McDowall are the first gay couple to marry at the Rutherglen church and did so after the local congregation gave its backing.

‘A good lady who comes to this church told us in one of our discussions, people will change, and don’t underestimate older people, either. They just need to think about it, and they’ll get there one day.

‘As a committed Christian, being able to marry the man I love with all my heart and soul, before God, in the church I love, with my family, friends and the congregation around us, is something I’ve dreamed of.

Mr Wallace went on to praise the church for being ‘in tune with modern Scotland’.

Same-sex marriage is currently banned in the Church of England and the Church in Wales, yet producers have said that they are ‘not afraid of controversy’ that may follow. 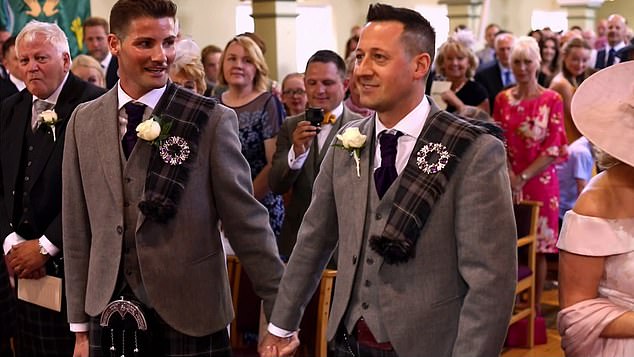 Hand-in-hand, the happy couple smile after exchanging vows in front of the congregation

Since 2016 individual congregations have been able to vote on whether or not their church should hold the weddings.

Songs of Praise, which has been running since 1961, is typically a more traditional worship programme and features hymns sung in churches of varying denominations from around the UK.

It has been described by former presenter Pam Rhodes as ‘a sort of hymn sandwich’.

But now Songs of Praise seems to be taking a more modern approach to appeal to younger audiences.

Last month, grime artist Stormzy – who headlined Glastonbury festival – allowed his performance of ‘Blinded By Your Grace’ to be rebroadcast on the show.

Reverend Kate Bottley, the programme’s only ordained presenter, also said that she had been recognised at Glastonbury Tor, at 4am by a man drinking Jack Daniels and coke.

She said: ‘I don’t expect people to fall on their knees in front of Songs Of Praise. But we do do the big stuff – life, love, death and trauma – and we are definitely not afraid of controversy.’