Georgia has stopped counting presidential ballots overnight and will resume doing so in the morning – however a result is not expected until at least Wednesday morning, and it could even be several days.

Donald Trump held a narrow lead of 100,000 votes over Joe Biden as poll workers announced they would head home for the night with mailed ballots from heavily Democratic parts of the state still needing to be counted.

With 92 per cent of votes in the southern swing state counted, the president leads his Democrat challenger by 50.5 per cent to 48.3 per cent. 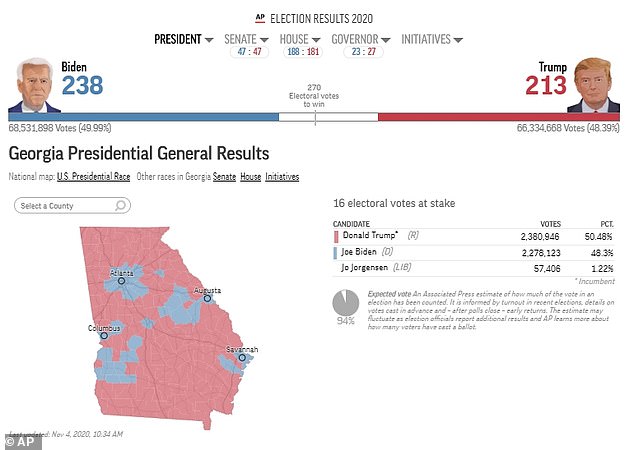 Donald Trump holds a 2% lead over Joe Biden in Georgia, but thousands more mail ballots still need to be counted

But the race has yet to be called because thousands of absentee ballots could not be counted before election day. Some 1.2million votes were cast by mail in Georgia this year, with around 127,000 still needing to be counted in two counties in Atlanta.

The counting of up to 60,000 ballots in the city was also delayed for two hours due to a burst pipe in the room where they were being kept. The leak took place early on Tuesday morning at State Farm Arena, home to the Atlanta Hawks basketball team. 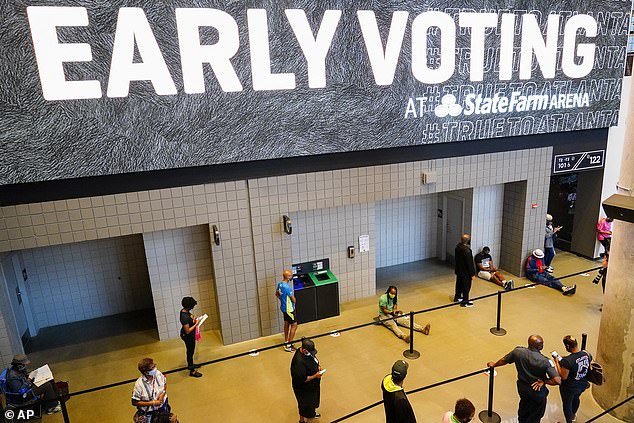 Poll workers headed home at 10.30pm eastern, or 3.30am UK, time in Fulton and DeKalb counties, which Biden is currently winning with 71.8 per cent and 83 per cent of the vote, respectively. His strong support in the city is one reason Biden said early Wednesday he is ‘still in the game’ there. 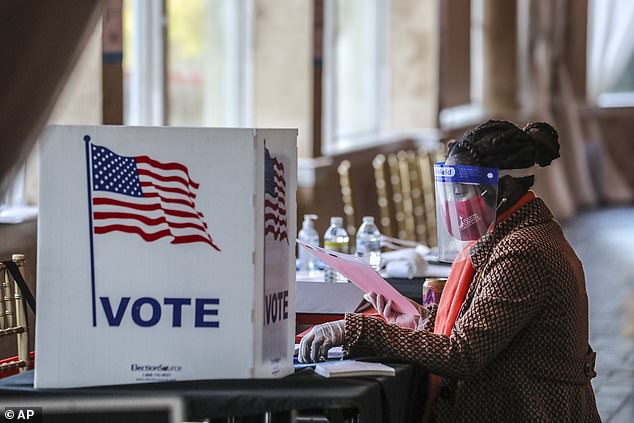 With Biden running up the score in the two counties, the former vice president could end up with as much as three-quarters of around 100,000 more votes, which would see him top Hillary Clinton’s victory margin of around 200,000 in Georgia’s most populous county four years ago.

They will return to finish the count at 8am Wednesday morning US time in Fulton and 11am in DeKalb.

Mail ballots also still need to be counted in the city of Savannah in the state’s east, where Biden currently leads 55.8 per cent to 42.8 per cent.

Results are not expected until at least Wednesday morning, according to Georgia’s secretary of state, while some officials said it ‘could take a couple of days’ to count all mail ballots, the New York Times said.

Officials in Fulton County said Tuesday morning they would ‘continue to tabulate the remainder of absentee ballots over the next two days.’

Your browser does not support iframes.