A pilot in Germany had some fun during a recent flight to honor the start of coronavirus vaccination campaign in Europe on Sunday.

Samy Kramer, 20, mapped out the route he would need to take to trace a giant 70 kilometer-long syringe in the sky. Using a Diamond DA-20 Katana, he flew some 200 kilometers near Lake Constance in southern Germany at about 5,000 feet in the air to remind people about the start of the COVID-19 campaign.

"There are still relatively many people opposing the vaccination and my action may be a reminder for them to think about the topic, to get things moving", Kramer told Reuters TV on Sunday.

CORONAVIRUS BOARD GAME CREATED BY GERMAN SISTERS SELLS OUT: REPORT

He said his flight should be considered a direct call to be inoculated, but instead as a "sign of joy, because the aviation industry has been hit pretty hard by the pandemic."

The syringe-shaped route showed up on internet site flightradar24. 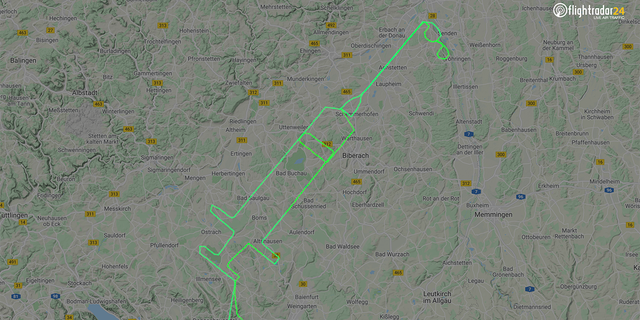 A pilot in Germany traced a giant syringe in the air.
(flightradar24)

The European Union kicked off its COVID-19 vaccination campaign on Sunday.

The 27-nation bloc staged a coordinated rollout aimed at projecting a unified message that the shot was safe and Europe’s best chance to emerge from the pandemic.

Austrian Chancellor Sebastian Kurz called the vaccine, which was developed in record time, a "game-changer."

"We know that today is not the end of the pandemic, but it is the beginning of the victory," he said.

The vaccine developed by Germany’s BioNTech and American drugmaker Pfizer started arriving in super-cold containers at EU hospitals on Friday from a factory in Belgium. Each country was only getting a fraction of the doses needed — fewer than 10,000 in the first batches for some countries — with the bigger rollout expected in January when more vaccines become available. All those getting shots Sunday have to come back for a second dose in three weeks.